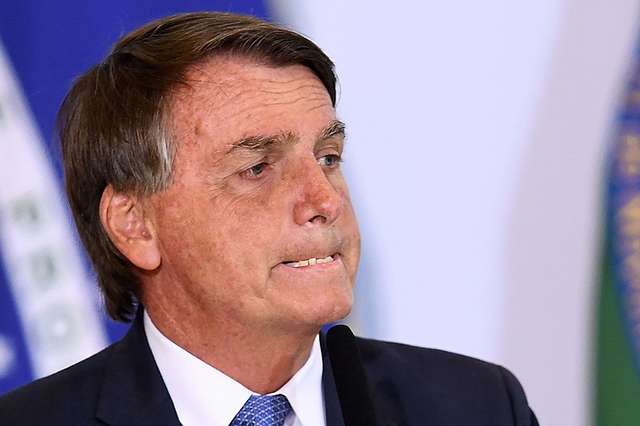 Brazilian President Jair Bolsonaro delivers a speech during the announcement of the hiring of professionals for the Doctors for Brazil Program at Planalto Palace in Brasilia, on April 18, 2022. – Brazil announced on April 17, 2022, it will “in the coming days” lift public health emergency measures in place for over two years, citing a drop in the number of deaths and infections. More than 660,000 people died of the virus in Brazil, one of the hardest-hit countries second only to the United States. (Photo by EVARISTO SA / AFP)

Brazilian President Jair Bolsonaro has finally addressed the country after a long wait of about 44 hours since the result of the fiercely contested presidential election was announced. Different from the expectations of many, the outgoing leader did not question the outcome of the polls. He, rather, promised to uphold the constitution of the country, which is an indication that he would not attempt to stay in office more than January 1.

“I have always been labelled undemocratic, and unlike my accusers, I have always respected the framework of the Constitution,” Bolsonaro said. “As President of the Republic and as a citizen, I will continue to respect all the commandments of our Constitution.”

In his brief address, the president thanked his supporters and those that voted for him. He also jokingly told the journalists that they would miss him, which was a subtle admission that he was ready to comply with the election result even if he disagreed with it.

Soon after the president’s brief speech, Ciro Nogueira, the chief-of-staff to the president, said Bolsonaro has authorized the transition of government to Lula, the certified winner of the election.

“President Jair Messias Bolsonaro authorized me, when it is time, based on the law, to start the transition process,” Nogueira said.

The country’s Supreme Court has also acknowledged that Jair Bolsonaro will not be contesting the election results and a handover process will begin once Lula’s team is ready.

Bolsonaro had earlier accused the electoral body of fraud. He also claimed the body was favouring the 77-year-old former leader. He did not restate those claims in his Tuesday comments, but his remarks on the protests indicate that he could have his reservations about the election that produced Lula as president.

Bolsonaro fails to condemn the protests

Since the election results were announced on Sunday, protesters and supporters of President Bolsonaro have put road blockages on over 300 roads in protest against the outcome of the elections. This move by the protesters has angered most Brazilians that feel their daily activities are being unnecessarily disrupted.

However, President Bolsonaro refused to condemn the protests and went a step further to describe it as “the fruit of indignation.”

“The current popular movements are the fruit of indignation and a sense of injustice about the way the electoral process took place,” he said.

Mr Bolsonaro advised the protesters to avoid destroying properties or disrupting the free movement of citizens. He, however, did not ask them to leave the streets.

We will keep protesting

Karina Laurinda, a protester in Sao Paulo, told Reuters news agency that she will continue protesting even if Bolsonaro says otherwise. She said her protest was against the government of Lula.

“Even if he says to calm down, not to react, we’re still going to react because we won’t accept a Lula government,” she said.

Another protester, Antoniel Almeida, also told AFP news agency that people like him would not accept the outcome of the elections no matter what happens.

Amid Bolnosaro’s silence, his supporters have called for a military coup to stop former president Lula from returning to power. The demonstration obstructed fuel supply, grain exports, businesses, and other daily activities.

What next for Bolsonaro?

For a man like Jair Bolsonaro, who has been described as the Brazilian version of Trump, giving up is not synonymous with him. The next election will be in 2026 and you can safely place a bet that he will be returning to challenge Lula. Although Lula had promised to rule for only one term, some have argued that it is one of those election strategies.

If Lula decides to contest again in 2026, his rival will remain Bolsonaro, which means the outgoing leader might have to keep engaging the people like Trump is doing in the US.