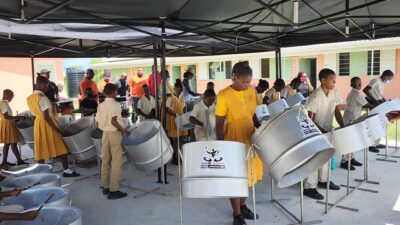 Students of the Nelvie N Gore Primary School were the recipients of a full set of steel pans, accompanied by a brand-new drum set, thanks to the family of the late Sir Rupert ‘King Swallow’ Philo

The donation was the fulfillment of a lifelong dream of the late King Swallow, who wanted to see the establishment of a Music Department at his alma mater.  He believed that this was a great way for the students to learn discipline, as well as a talent that they could use later on in life.

Director of Culture, Vernon ‘Dr. Solo’ Benjamin, called for the naming of the Music Room at the school, in honor of the late Sir Rupert Philo.

All of the speakers encouraged the students to take pride in their school, and learn music as it could be a vehicle for their future.

Shennette Philo, daughter of the late Sir Rupert, reminded the students to take good care of the instruments during her address.

The assembled audience was treated to a performance by the students, as well as an impromptu performance by Dr. Solo, who did a rendition of “Man to Man”, a tune made famous by King Swallow.