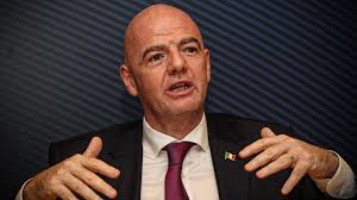 With just two week until the start of the 2022 World Cup in Qatar, FIFA President Gianni Infantino has written to all 32 competing nations, urging them to ‘focus on the football’ and to set aside human rights concerns, but this has been met by a volley of criticism,  particularly from Amnesty International who have accused the football authorities of brushing the major human rights issue that has long been in the public eye, under the carpet.

Tone of letter attempts positivity but achieves opposite

In the letter addressed to the Presidents and General Secretaries of all the associations involved,  Infantino pleaded for them not to allow football to be dragged into every ideological or political battle that exists. He was keen to acknowledge that the game does not live in a vacuum and that they recognised that there are challenges of a political nature all around the world.

He tried to reassure everyone that FIFA  respect all opinions and beliefs, without handing out moral lessons. He said: “One of the great strengths of the world is indeed its very diversity, and if inclusion means anything, it means having respect for that diversity.”

He went on to stress that no one culture or nation is better than any other, insisting that this was the principle which is the foundation stone of mutual respect and non-discrimination, and asked for football to be allowed to take centre stage.

Rainbow armbands will be worn irrespective of consequences

The letter bears no mention of the request by England and Wales and six other European nations for their captains to wear “One Love” multicoloured armbands, which are a response to concerns about Qatar’s anti-LGBTQ laws. Despite threats of disciplinary action, both British nations have already said they would defy any ban by FIFA.

Denmark will wear a toned down kit as their protest against human rights in Qatar, and the Australians have voiced their concerns on many issues in a series of videos released by several of their leading players.

Steve Cockburn, the Amnesty International Head of Economic and Social Justice, was quick to respond to the content of the letter pointing out that FIFA needed to start tackling the serious human rights issues, and challenged them to publicly commit to establishing a fund to compensate migrant workers before the tournament kicks off, and ensuring that the LGBT community do not face discrimination or harassment. He declared his astonishment that after all this time, they were still to do so.

Qatar World Cup CEO Nasser Al Khater said that gay fans would be welcome, even though the culture meant anti-LGBTQ laws had to remain in place, which he accepted might deter some fans from travelling.

Controversy to continue right through to end of tournament

It seems that the controversy that has followed this tournament from the very first minute it was awarded to Qatar, is going to continue right up to and then right throughout the competition, but the governing body don’t do themselves any favours, and the timing and more importantly, the wording of this letter could certainly have been so much better.