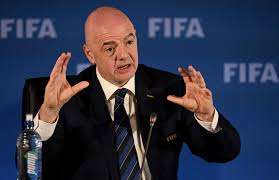 On the eve of the 2022 World Cup, FIFA president Gianni Infantino has delivered a quite extraordinary speech, in which among other things he has accused the West of “moral hypocrisy” in an address that lasted just under an hour.

With the first game between the hosts Qatar and Ecuador less than 24 hours away, Infantino’s press conference was supposed to be a light-hearted Q and A session and a positive introduction to the event; but what it ended up doing was stunning those 400 or so journalists in attendance into open-mouthed silence.

The auditorium’s audience, with cameras rolling, could not believe the ferocity of the attack, as the man incredibly in charge of the tournament, attempted to justify his defence of the home country, as well strongly criticising the media coverage of migrant workers, the LGBT+ community, and the last-minute U-turn on alcohol consumption at matches.

In the build up to the competition, there have been major issues overshadowing the event, with the main topics being the deaths of migrant workers in Qatar and the treatment of LGBT+ people in the country. Reports have suggested that as many as 6,500 labourers from places such as: India, Pakistan, Nepal, Bangladesh and Sri Lanka, as well as several others, have died on construction sites for the purpose built stadiums; figures seemingly backed up by those countries’ embassies in the desert state.

The Qatari government said the total was misleading, because not all the deaths recorded were of people working on World Cup-related projects, actually stating quite remarkably that only 37 deaths (out of 6,500 that is) occurred at World Cup sites between 2014 and 2020, and only three of them were “work-related”. A denial of truly bewildering proportions.

Incredibly, Infantino skirted around those facts, and instead turned on the European nations competing in the tournament suggesting that it is they who should apologise for acts committed in their own histories, rather than focussing on migrant workers’ issues in Qatar.

In a speech that will live long in the memory of everyone who either attended or watched on in amazement and then disgust, Infantino tried to deflect the pressure being put on the Qataris over the the contentious issues that he obviously hoped would go away, by laying into others. “I am European, but for what we have been doing for 3,000 years around the world, we should be apologising for the next 3,000 years before giving moral lessons elsewhere.”

He said if Europe really cared about the destiny of the people (presumably referring to the migrants), they could create legal channels, just as Qatar had, where they could go to Europe to work. He challenged European countries to give the migrants some hope for the future: “I have difficulties understanding the criticism, we should all educate ourselves, many things are not perfect, but reform and change takes time,” he said.

Then, again in an attempt at justification, he added that it was difficult for him to have to take criticism of a decision made 12 years ago, although it might need pointing out to him that he is perfectly happy to represent FIFA and take all the luxuries being provided to them over the next month. He insisted that this would be the best ever World Cup, before again having a dig at the “west” when he said: “This one-sided moral lesson is just hypocrisy.”

He then completely went off at a tangent which had the audience wide-eyed in astonishment. “Of course I am not Qatari, Arab, African, gay, disabled, or a migrant worker.” He said. However, he went on, he did feel like them because he knew what it meant to be discriminated and bullied as a foreigner in a foreign country; before trying to make an incredibly clumsy comparison when he likened some of the serious discriminatory acts that the world are currently experiencing with… having red hair and freckles, for which – he informed everyone who were now incredulous to his ramblings – he was bullied as a child.

Excruciatingly, he then said: “Today I feel Qatari, I feel Arab, I feel African, I feel gay, I feel disabled, I feel a migrant worker.”

Everyone welcome message difficult to accept

Turning his attention to LGBTQ+ rights, Infantino repeated the Qatar Supreme Committee’s insistence that everybody is welcome despite the country’s strict laws against homosexuality, punishable in some cases by death. “They have confirmed to me that I can confirm that everyone is welcome, whatever religion, race, sexual orientation, belief she or he has.”

He did accept the “odd” person might say opposite, but that was the official line delivered, in practice it is more likely that a high proportion of the LGBTQ+ community will be made to feel very uncomfortable at best, and very probably highly unwelcome and unsafe.

Alcohol free stadiums of no relevance to arrogant president

After the announcement yesterday (November 18) that no alcohol would be served at any of the eight World Cup stadiums, a decision that has been met with widespread condemnation, Infantino then attempted to play down its importance by patronisingly saying: “If this is the biggest issue we have for the World Cup then I will resign immediately and go to the beach to relax.”

In saying that, he demonstrated that he totally missed the point and failed to appreciate the irony of the ruling, which goes against the inclusivity statements he was awkwardly trying to promote. Arrogantly he said: “If for three hours a day you cannot drink a beer, you will survive.”

Comments leave everyone so much less assured

He assured everyone that every decision taken at the World Cup is always a joint decision between Qatar and Fifa, which unsurprisingly, drew smirks from the room, as it actually had the completely opposite effect and left everybody even less assured.

Nevertheless, the late change has potentially thrown FIFA into a major legal dispute with one of their biggest sponsors, Budweiser, with whom they have a multi-million pound contract.

The president also brushed over concerns about Iran’s participation, which begins on Monday 21st against England. They have come under scrutiny due to their heavy-handed crackdown on protestors in the country. Mahsa Amini died on 16 September, allegedly for not wearing her hijab correctly and wearing skinny jeans after being arrested by the country’s morality police, who are in essence, in charge of enforcing its very strict laws and customs. Although the authorities deny the responsibility, more than 15,000 people who have been protesting have been arrested in the country, with death penalties a distinct possibility for many.

When asked about whether or not a country such as Iran should be taking part, Infantino chose to avoid the subject, simply stating that concentration should be on “football”. He then over stepped the mark and enraged many by suggesting that possibly it would be good if the Iranians hosted a tournament in future.

In response to his rantings, Steve Cockburn, from Amnesty International was highly critical of Infantino, pointing out that he was dismissing the enormous price paid by migrant workers in order to actually make his precious tournament possible at all, together with totally overlooking FIFA’s responsibility as well.

He said that it was the organisations duty to announce that they will invest a significant part of the $6billion they will bank from the tournament, and make sure the funds are used to compensate lost workers and their families directly.

Bordering on the delusional

The whole bizarre performance undermined any authority he may have felt he had and was completely counter-productive. He lost his audience almost immediately who were visibly appalled by his ramblings, which at times bordered on the ridiculous and at others, delusional. He also appeared to want to be confrontational and incite tensions, rather than smooth them over.

It was staggering demonstration of a man totally out of touch with the organisation he represents, as well as ignorance over many hugely important global issues. Sadly as things stand, he is being re-elected unopposed, but his insulting attitude and demeanour may yet lead him to live to regret such an outrageous outburst, that has undoubtedly done more harm than good.