Matt Hancock suspended as MP for accepting place in I’m a Celebrity… Get Me Out of Here! 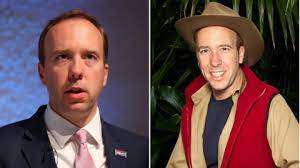 Former Health Secretary Matt Hancock has sparked controversy by accepting an invitation to take part in the popular ITV reality show: I’m a Celebrity… Get Me Out of Here! The new series starts on Sunday 6 November with ten celebrities, including pop stars, actors, TV personalities, and even the King’s nephew-in-law, being forced to live in a jungle environment, for up to three weeks. The regular format always has an additional two well known characters/celebrities join the camp, a few days after the initial group, just to spice things up a little bit.

For the TV executives Mr Hancock agreeing to be one of them, is like gold dust; but it has not gone down well in the political world, with him being suspended as the West Suffolk Conservative MP by Tory chief whip Simon Hart; or indeed with families of some of those who sadly lost their life during the pandemic during his watch as the Secretary of State. They see it as another kick in the teeth and a blatant disregard for the deaths of their loved ones.

Now is the right time… apparently

The makers of show have apparently been trying to persuade Mr Hancock to take part for several years, but each time he turned them down. However, he now sees it as a great opportunity as he no longer expects to serve in government again and he has told colleagues that he wants to use his time in the jungle to promote his dyslexia campaign, a condition he apparently has, but went undiagnosed throughout his childhood.

He said he wanted to embrace popular culture: “Rather than looking down on reality TV, we should see it for what it is, which is a powerful tool to get our message heard by younger generations.”

Once again he stands accused of looking after his own “affairs”

Critics have highlighted his appalling sense of timing, just when the country is struggling with spiralling energy prices and the cost of living as a whole, something that will undoubtedly be affecting the majority of his constituents. However, Mr Hancock has said that the show’s producers have agreed that he can be reached at any point on any urgent constituency matters.

He has been out of government since he was forced to resign as the Health Secretary after he broke social distancing rules by having an affair with aide Gina Coladangelo in his departmental office, following which he separated from his wife Martha of 15 years.

“Celebrity” status called in to question

He has faced an almighty backlash, particularly from the group: “Covid-19 Bereaved Families for Justice” who called Mr Hancock’s decision to take part in the programme as “sickening”, and strongly urged ITV to seriously reconsider their actions and remove him from the show. They made the point that he is not a celebrity, he is in fact the man who oversaw the UK having one of the highest death tolls in the world from Covid-19, whilst all the time blatantly breaking his own lockdown rules.

Mr Hancock was accused of making a “serious error of judgement” by his local West Suffolk Conservative Association, who reiterated that they were extremely disappointed with him, pointing out that he should be working hard for all of their constituents, particularly those facing hardship.

Seeing their representative parading around on TV in the knowledge that he not only wont be losing any of his £84,144 salary, despite being absent through his own choice, he will be receiving a hefty fee off the show’s makers, irrespective of whether he will be giving some of it to charity, which he has stated is his intention. It possibly would have been easier to stomach had he promised ALL of it.

Prime Minister Rishi Sunak is believed to be far from impressed by Mr Hancock’s decision. The PM’s official spokesperson said: “MP’s should be working hard for their constituents, whether that is in the House, or in their constituency.”

Calls for resignation and by-election

Opposition parties have called on the MP to resign and trigger a by-election in his constituency. The Liberal Democrats deputy leader Daisy Cooper accused him of “abandoning his constituents” making the very good point that in the “real world” he would be sacked in any normal workplace, had he just abandoned his duties. The party are calling for him to forego his MP’s salary for the duration of his time on show.

Labour MP Chris Bryant, who chairs the Commons standards committee, said that Mr Hancock should face a by-election, calling the decision to walk away from his responsibilities “deeply unpleasant”.

Other MP’s have taken part in the programme before, albeit probably not quite so high profile as Mr Hancock. Culture Secretary Nadine Dorries and ex-Scottish Labour leader Kezia Dugdale have both put themselves through the experience and Ms Dugdale had some words of advice on the eve of him taking part.

She admitted that she had found it difficult to connect with other camp-mates and urged him to step away from being a “risk-averse politician”. She added that any politician, regardless of their profile, will find it a struggle, because they simply are not used to the type of conversations that the celebrities who become their camp-mates, have with one another.

She explained that he is used to thinking about an answer to every question, often twisting the question to suit himself and avoid an awkward answer; but highlighted that people notice that, even though MP’s more often than not fail to appreciate that fact, so just being natural and honest would probably be his best approach. That said, neither of those traits are something particularly associated with politicians.

Whilst Mr Hancock’s appearance may irritate several others in the camp due to contrasting political views, his presence will at least be a relief in respect of one or two who may have been picked on by the watching public, such as Chris Moyles or Mike Tindall, will probably escape some of the more gruesome challenges.

The bookmakers have installed Mr Hancock as the favourite to do the most of the trials once he gets in there; and the the more grisly the task, the greater the number of votes he is sure to receive.