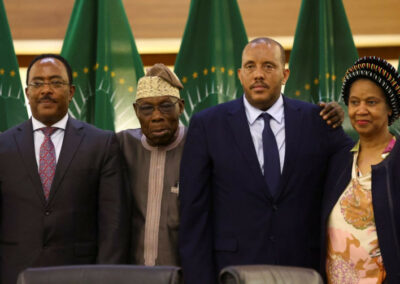 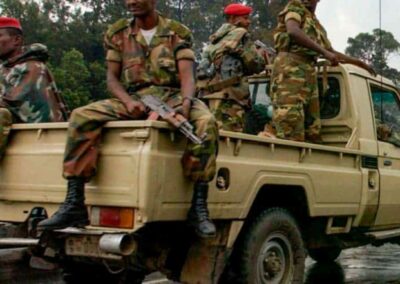 After two years of bloodshed, hundreds of war crimes, displacement of citizens, and compelling civilian Ethiopians into famine, the Ethiopian government and the Tigray forces have agreed to a ceasefire and end the civil war that has killed an estimated 600,000 people. The ceasefire agreement was reached on Wednesday in Pretoria, South Africa, where the African Union mediation team held talks with the warring sides.

“The two parties in the Ethiopian conflict have formally agreed to the cessation of hostilities as well as to systematic, orderly, smooth and coordinated disarmament,” said Olusegun Obasanjo, former Nigerian president and head of the AU mediation team, at a ceremony in South Africa.

Talks initiated by the African Union (AU) began barely two weeks ago. The mediation was headed by the former Nigerian president Olusegun Obasanjo and the immediate past President of Kenya, Uhuru Kenyatta. The ceremony on Wednesday witnessed the signing of the agreement by delegates from both sides after they agreed on a “permanent cessation of hostilities.”

Will both parties respect the agreement?

Signing an agreement is not so difficult. Implementing it is usually a challenge. While both parties have agreed to stop fighting, many are scared that putting a pen on paper is different from dropping the gun.

The head of the mediation team, former President Olusegun Obasanjo, said the implementation of the ceasefire agreement would be supervised and monitored by a high-level AU panel.

“This moment is not the end of the peace process. Implementation of the peace agreement signed today is critical for its success,” Obasanjo stated.

The project director for the Horn of Africa at the International Crisis Group, Alan Boswell, said the peace process would be difficult, but the first step would be to drop the guns immediately.

“This is a huge breakthrough that involved major concessions from both sides, even if the parties punted the thorniest details to future peace talks,” he said.

“If they do stop fighting, then today will just be the start of what will surely prove a very bumpy, long, and difficult peace process,” he added.

Getachew Reda, a spokesperson for the Tigray authorities, said he hopes both parties would honour their commitments after wide-scale destruction and deaths in his region.

Uhuru Kenyatta, the immediate past President of Kenya, who was also part of the talks said: “The lasting solution can only be through political engagement and being able to accommodate our differences, our diversity, while still remaining a united Ethiopia.”

“It’s my hope that all parties will go back and … begin the process of dialogue. The lasting solution can only be dialogue,” he added.

Although the details of the pact were not made public, the coming days will tell if the signatories will match their words with actions.

A truce that does not include Eritrea

Although the fight was basically a civil war, another independent country, Eritrea, was involved. The Eritrean army fought on the side of the Ethiopian forces, invading Tigray communities on the border of both countries. Other regional troops were also involved in the fight, but none were involved in the truce signing.

The non-involvement of the other troops in the truce signing has raised concerns over the authenticity of the agreement. The Tigray people believe the truce is incomplete until it becomes binding on external forces.

A Tigrayan man in Addis Ababa told Reuters news agency that he was happy with the truce but insisted that it was incomplete without the involvement of Eritrea.

“I’m very happy because this will put a hold on the suffering,” the unidentified Tigrayan man said.

“We still have questions on the agreement … we didn’t hear anything about Eritrea. I hope that it will be in the details,” he added.

The prime minister of Ethiopia, Abiy Ahmed, said his side is committed to collaborating for the implementation of the agreement signed on Wednesday.

“The agreement signed today in South Africa is monumental in moving Ethiopia forward on the path of the reforms we embarked upon four and half years ago. Our commitment to peace remains steadfast,” Abiy Ahmed wrote on Twitter.

The prime minister thanked the two former leaders, Obasanjo and Kenyatta, for bringing peace back to the country. He also commended other members of the AU delegation and the Ethiopian army for their courage.

The spokesperson of the Tegray region at the mediation in South Africa, Getachew Reda, said the war changed the course of Ethiopia, and it was time to end the suffering of the Tigray people.

“Making peace has proved more difficult and more intractable and elusive than presiding over the killing of women and children and destruction of property,” Reda said.

“The war over the last two years has claimed the lives of hundreds of thousands and has turned Ethiopia, once on the cusp of great economic progress, into a bad parody of itself and caused tremendous suffering to the people of Tigray,” she added.

The Tegray people are the most hit by the war after facing not only the Ethiopian forces but also forces from Eritrea and other parts. The Ethiopian government has been accused of genocide after government officials are said to have planned the elimination of the people in the region. The central government has denied the claim.

The Ethiopian government was also accused of blocking food supplies to the region and was said to have used food supplies as a weapon.

Videos shared on social media also showed Ethiopian and Eritrean forces burning houses in Tigray and looting properties. The government’s continuous refusal to allow journalists to enter the region has further raised the fears that more atrocities might have been committed against the people there.

However, the TPFL is not also free of these accusations. The group is also accused of committing war crimes, including genocides and rapes. It appeared that the other side only committed more of these.

Before both parties agreed to cease fire on Wednesday, there was no clear reason for the civil war other than the quest for power. The fight was basically about who controls what.

Although the fight began in late 2020, tensions escalated earlier that year when the National Election Board of Ethiopia, the body responsible for conducting general elections, postponed the country’s elections, which were supposed to hold on August 29 2020 indefinitely.

The postponement led to the extension of federal and regional lawmakers beyond the October 2020 deadline. The federal parliament also extended the constitutional term limits of executive officials.

Close to the end of the constitutional term limits, the TPFL announced that it would stop recognizing the central government as legitimate and proposed that a caretaker government be put in place until an election is conducted. Failure by both parties to reach a consensus led to an escalation in November, which was the beginning of the two years war that led to the deaths of over 600,000 and displaced millions of people.

The peace pact signed on Wednesday has given the world a sigh of relief. Many world leaders and international organizations have commended both parties for choosing the path of peace.

Thedros Ghebreyesus, an Ethiopian and the director general of the WHO, was among the first to react to the peace pact.

“Peace is a prerequisite for health. We welcome the commitment of the Parties to work towards peace in Tigray, Ethiopia,” he tweeted.

Moussa Faki Mahamat, the president of the African Union Commission, said: “I warmly commend the Parties for signing a cessation of hostilities agreement following talks facilitated by the AU Panel.”

“The African Union is committed to continue supporting the Parties to find lasting peace & reconciliation for all Ethiopians,” he added.

Stephane Dujarric, a spokesperson of the United Nations, said the peace agreement is a welcomed step, adding that it will “bring some solace to the millions of Ethiopian civilians  that have really suffered during this conflict.”

Karine Jean-Pierre, the spokeswoman of the White House, said: “The United States remains committed to supporting this African Union-led led process as it continues and to partnering to ensure it brings a lasting peace to Ethiopia.”