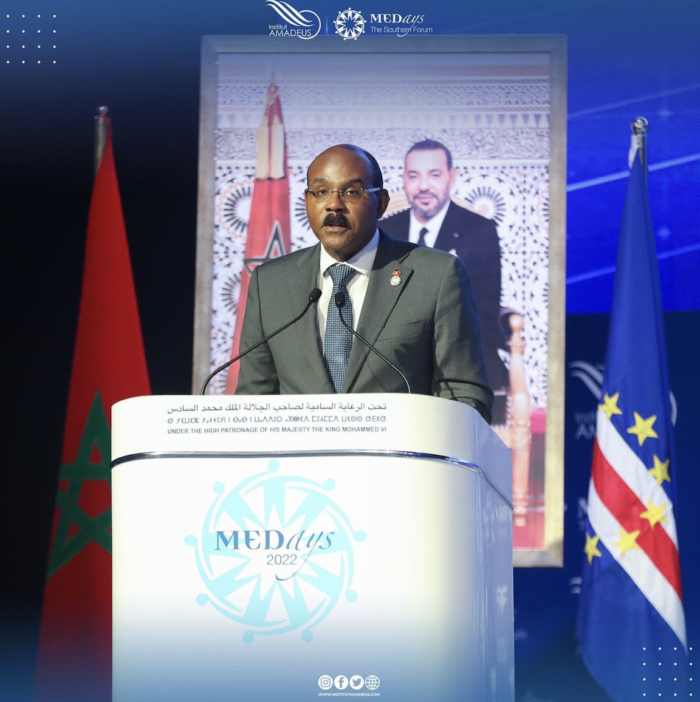 The MEDays Forum is the only non-governmental event organized in Morocco and one of very few in Africa to be open to foreign Heads of State and Government.

With an average of nearly 30% of government representatives among the nearly 200 speakers, MEDays confirms its continued attractiveness to political decision-makers.

Addressing the audience, Prime Minister Browne called on them to continue to heighten their collaboration and further integrate, as they pursue the path of global peace and international cooperation.

“Today, we live in a world characterized by crises, which incidentally are virtually all man-made.  They include but are not limited to global injustices & inequity, political instability, terrorism, financial crimes, the refugee crisis, climate change, and the pandemics of wars and disease. The resolution of these crises requires a global commitment; an all-of-society approach to resolve them. Resolving these crises requires a form of creative destruction, to replace these perennial crises, with new innovative approaches, that will result in a more just, equitable, peaceful and sustainable global human civilization,” Browne said.

Browne says a new world order would require greater global collaboration and cooperation among all states, with the institutionalization of socio-economic policies that are fair and equitable providing for a more equitable distribution of wealth and significantly reducing or eliminating injustices, including poverty.

“There are sufficient resources on the planet to support the achievement of global sustainable development.  Instead, those resources are unevenly distributed to support profligacy and to fund senseless wars and conflicts. My articulations so far may sound utopic, perhaps misplaced, or even unimaginable.  I can assure you though, that I do not have my feet firmly planted in the cloud,” he added.

Furthermore, PM Browne said the quest for a fairer, more equitable, and just world, will have to be driven by a more unified global south, whose peoples have had to endure these inequities and injustices.

“This unification should be led by a more integrated Africa to include its Caribbean diaspora. The global south is endowed with all of the required mineral and people resources to make the necessary paradigm shift, to bring about a new equitable and just world order; but we lack the focus, cooperation and bold leadership required to effect this change,” he added.

The most significant existential threats facing us at this time, are climate change,  the war on Ukraine, and the lingering socio-economic effects of the COVID-19 pandemic.

Where climate change is concerned, Browne said it is the most significant existential threat facing all of humanity.

“While some progress has been made in addressing climate change, insufficient advances have been made. The Conference of the Parties (COP) Diplomacy has tinkered at the edges of the problem for several decades, agreeing that there is an enormous problem, but failing to grab the beast by the horns and wrestle it to submission. Governments have been prepared to agree on rules, but, in the absence of legally binding deadlines and penalties, they have been unwilling to implement them,” he added.

He said Governments have also agreed on the measurement that will tip the world over the precipice to disaster – 1.5 degrees Celsius is the limit that all have agreed will signal the end of much of human existence and the land masses that we know today.

Yet, according to PM Browne, climate diplomacy has failed to halt the unrelenting march to that terrifying disaster.

“Every year, the world creeps forward, polluting the atmosphere with emissions of greenhouse gases that gradually sink island nations and ancient civilizations, and that tear away at the coastlines of mainland states. The global community is now on course to reach and exceed that cataclysmic barrier of 1.5 degrees Celsius. Extreme storms, droughts, and floods are already occurring more rapidly and with greater intensity in every part of the world, threatening the survival of SIDS. Undoubtedly, the rich countries will last longer, he said.

They can buy the technology and build the walls and barriers to defend against the impact of Climate Change, according to Browne, “but they will exist in a planet of countries stripped of their habitats and biological riches, a scorched and depleted world which will cause new tensions, new fears, new wars, and new lawlessness”.

And now on the issue of global wars and pandemics, Browne said a close examination of their history would confirm that virtually all started in the global north.

“Yet, the global south, especially Small island states are the greatest victims of pandemics, whether they are diseases, economic recessions, or wars. COVID-19 has, however, thought us that no one is safe until all are safe,” he said.

“The current war in Europe between Russia and Ukraine is a telling example.  No nation will be safe as the war protracts. No nation has been spared the consequential high prices of oil, the shortages of fertilizers and commodities, as well as, the resultant high prices. Of course, developed and rich nations are better able to ride the storm of these conditions because of their superior financial and technological resources,” Browne added.

Furthermore, he said the countries of the global south, because of their inherent vulnerabilities and lack of resilience are suffering disproportionately.

“This is compounded by the fact that they were already struggling economically because of the COVID-19 pandemic, and are less able to cope. Not only have their peoples faced the high costs of imported inflation, but they have also had to incur increased borrowings, to plug the hole of significantly reduced revenues, caused by the global lockdowns and logistical disruptions, of both COVID-19 and the Ukraine war,” Browne said.

The prime minister touched on political stability and the struggle for scarce resources.

PM Browne also congratulated His Majesty, King Mohammed VI, for his leadership and the major diplomatic triumphs that Morocco has achieved regarding the Sahara Issue.