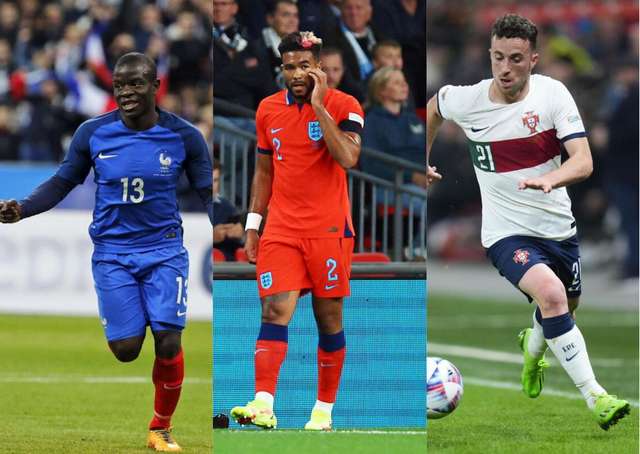 With the 2022 FIFA world cup set to kick off on the 20th of November in Qatar, some countries have been concerned about their players’ fitness and fatigue. Due to the timing of the world cup, players will have little or no time to rest properly before the world’s biggest football show begins. With the 2022/2023 football season underway, some countries have suffered major setbacks, with key players injured.

Some of these countries and players include the following;

The world cup defending champions suffered a massive blow in their quest to defend the title, with some of their players ruled out injured. They are the likes of N’goloKante, Paul Pogba, and Raphael Varane.

The French international, who plays his club football for Chelsea Fc of England, suffered a hamstring injury in a fixture against Tottenham Fc back in August.  The 31-years-old played a key role in their previous world cup triumph in 2018. His injury will keep him on the sideline for four months, compelling him to miss the world cup.

The 29 years old Juventus central midfielder picked up a hamstring injury in training after signing for the Italian side. With FIFA not allowing injured players at the world cup, his injury could see him miss the world cup later this month.

The 2014 world cup finalist is a side to watch out for in the 2022 FIFA world cup. They have been in fine form so far but still have their own injury problems,  with the likes of Paulo Dybala and Angel Di Maria out injured. It is unlikely that the duo will become fit on time for the World Cup.

If Angel Di Maria fails to recover before the world, the 34-year-old might have played his last in 2018. Paulo Dybala might still have another chance in 2026 since he is just 28.

England is one of the most hit by injuries as they might be without their major right-backs when they travel to Qatar for the world cup. Though Gareth Southgate still has the likes of Trent Alexander Arnold, who just returned to full fitness in the right-back position.

The Chelsea right-back picked up a knee injury in a UEFA  champions league fixture against AC Milan back in October and could miss the world cup in Qatar, as he has a very short time to recover if he must be on the plane to Qatar.

The world-class defender said he is fighting hard to beat time, and with just two weeks left, the fear that he might not be able to beat the time is growing. If he, fortunately, gets a chance to participate in the World cup, he is no doubt a star to watch.

The Manchester City defender sustained a groin injury in the first half of their 6-3 victory over Manchester United. The 32-year-old has gone under the knife in a bid to recover speedily. Despite beginning his recovery process, he is still in doubt for the World Cup, leaving a blow for the Three Lions.

The English left-back announced that he would miss the world cup on his Twitter page. The star said: Following my ACL injury, I worked so hard to make sure I was ready for the World Cup. It has always been a dream of mine. Unfortunately, this won’t be possible following my scan results.

Although Chilwell’s injury is not severe, with two weeks to the beginning of the world cup, he will not recover before it begins. The left-back’s name has been added to the long list of English stars that will not be in Qatar.

Portugal will be without Liverpool’s forward Diogo Jota when the World Cup begins in Qatar in two weeks. The 25-year-old picked up an injury in Liverpool’s premier league victory over Manchester City.

The Qatar 2022 FIFA world cup might be the last for some football stars, such as Cristiano Ronaldo, Lionel Messi, Luka Modric, Neymar Jr, and others. Avoiding injuries before the competition is the goal of these players. However, some stars have failed to maintain their fitness and have sustained injuries.

Many young stars will want to write their names in the history books of the world cup. If they fail to write their names early enough, they might never get the chance when they are of age. With injury problems, many stars will be missing at the competition and will have to watch the greatest football festival on the screen like every football fan.