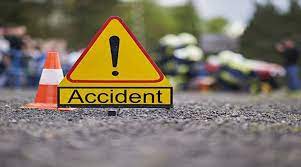 A coaster bus transporting hotel worker in Jamaica crashed this morning, leaving two people are dead and at least nine others seriously injured.

The accident happened when the coaster slammed into a parked truck along the North-South Highway in the vicinity of Braco in Rio Bueno Trelawny.

According to reports, just a little after 4 o’clock this morning, the driver of the coaster bus was transporting hotel workers from St Ann.

“On reaching a section of the North South highway in the vicinity of Braco, the driver lost control of the vehicle and it collided with a parked cold storage truck. The impact resulted in the driver and several passengers sustaining injuries and being rushed to the Falmouth hospital where two male passengers from the bus were pronounced dead,” according to reports from Nation News

The driver and other passengers remain hospitalized

The identity of those who died are being withheld from the public until their families can identify them.