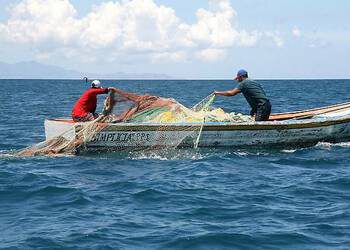 The Jamaican fishermen, over 30 of them, who were held for illegal fishing in Columbian waters were returned home on Frida, according to Foreign Affairs Minister Kamina Johnson Smith.

The fishermen she said arrived safely at the town of Port Royal.

“The fishermen were received at sea by members of the Jamaica Defence Force (JDF) as well as representatives of the Passport Immigration and Citizenship Agency (PICA),” the statement said.

Four nationals from the Dominican Republic were also detained on the same vessel. They too were also repatriated. The men had work permits to operate in Jamaica.

“I am happy to report that all 33 Jamaican fishermen are now on the island although regrettably, as previously advised, the captain has been detained to face charges. I extend heartfelt appreciation to the Ministry of Agriculture and Fisheries for securing the necessary funding for the Jamaican leg of the repatriation, as well as to the JDF for coordinating the logistics with their Colombian counterparts and receiving the fishermen at the arranged meeting point where they were then transported to Jamaica. I also acknowledge PICA’s integral role in the verification process relating to the crew members,” said Johnson Smith.

Adding, “I also commend the boat owner who, in recognition of the private nature of his enterprise, has committed to reimbursing the Government for no less than one-half of the cost of fuel purchased by the JDF to undertake the repatriation exercise.”

The Foreign Affairs Minister cautioned that fishermen should respect and not extend their operations to the territorial waters of neighboring countries.