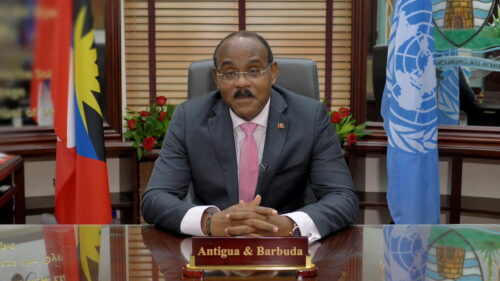 Public sector workers could receive as much as a 9% increase overall at the start of the new year if negotiations are completed soon.

The government is currently negotiating for the period 2018 to 2021, which according to Prime Minister Gaston Browne will represent 3% every year.

While there are demands for more, Browne said yesterday that the government is going against recommendations by the International Monetary Fund to approve any increase.

He said Antigua and Barbuda has the highest wage bill per GDP of any country probably in the world.

“I’ll tell you this much to the extent the IMF in its last article, three weeks ago said to us that we should do nothing to increase salaries and wages. So we are going against that recommendation, to perhaps give another 4% to get up to about 9%, which would represent 3% per year,” Browne said.

He said the government has already paid 5% upfront, saying that leading up to the 2018 elections all back pay was paid in full.

“Let me explain to public servants that the government is still struggling, because of the lingering effects of COVID. Yes, we still have not reached 2019 levels of revenue and it will take us at least another year to recover the lost gains. So, the government is not in a position to even give an increase,” Browne insisted.

He said the government is simply trying to address the escalation in prices on the world market, hoping that these, increases will be short-term and short-lived.

Furthermore, Browne said he is not aware that there is any other firm in Antigua and Barbuda giving more than 3% increase per year, if at all.

“And to ask the public sector that is struggling to meet its obligations to pay more than the private sector is unreasonable to understand. So again, all I’m asking for is some balance,” Browne said.

The prime minister said contrary to beliefs, the government is determined to empower the people of Antigua and Barbuda.

“The workers don’t need to push us to give increases. Provided we can afford it, they’re going to get it that is our policy. And even where there is no affordability, we are prepared to do it,” he added.

But for public servants to receive the much-needed increase by January, Browne said negotiations must be finalized soon.

The salary increases according to Browne are coming at a time when inflation is predicted to be reduced.

“We expect inflation to come down by the first quarter of next year, it should be probably down to maybe three 4% maximum. As it stands now in Europe and North America, inflation is between 9% and 10%. Some places in Europe are as high as 11%. Luckily for us, because of the social programs that we have in place in the large category of tax-exempt zero-rated goods, our inflation is about six and a half to 7%. I’m not saying that we may not have one or two months in which we would have peaked, but in terms of the average, it is about six and six and a half 7%,” Browne added.

Additionally, Browne says, if wages increase too fast, it can be a double-edged sword.

“Because as wages increase, prices also increase concurrently. I don’t think they’re holistically looking at the issue. And what we’re asking for here is some level of reasonableness recognizing the circumstances in which the country, you know, has now found itself as a result of COVID,” he said.

Another argument according to Browne is that if salaries are increased too drastically, that in itself could be inflationary.

“And already we have an inflation problem. So, it’ll be adding to that problem,” he added.

Meanwhile, the minimum wage should come on stream on January 1st, 2023.