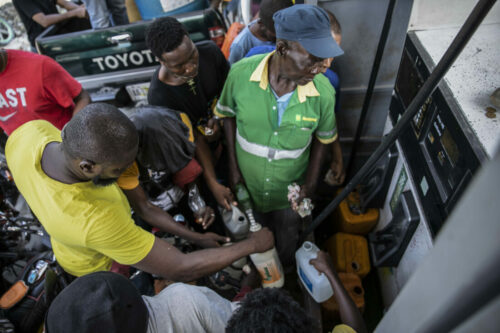 After almost two months of fuel blockade, gas stations in Haiti opened up to the public on Saturday, to cheers of excitement.

Gas stations in the country’s capital had been closed since the gang known as G9 seized control of an area surrounding a key fuel terminal in mid-September, following the announcement of a fuel price hike Prime Minister Ariel Henry, a move which left millions of people hopeless.

Hospitals, banks, and stores reduced their working hours while the cholera outbreak which killed dozens and sickened thousands worsened.

Nearly 400 trucks lined up at the Varreux terminal in Port-au-Prince to fill their tanks with a heavily armed police escort, after the G9 gang, lifted the blockade days after clashing with police who sought to reassert control of the area.

With this new development, motorists and other people are concerned that fuel would soon run out.

A gallon of gasoline increased from US$2 to US$4.78, diesel from US$3 to US$5.60, and kerosene from US$3 to US$5.57 after the government announced in September that it could no longer afford to subsidize fuel.