Terror alert in Istanbul as explosion kills 6, injures 81 others 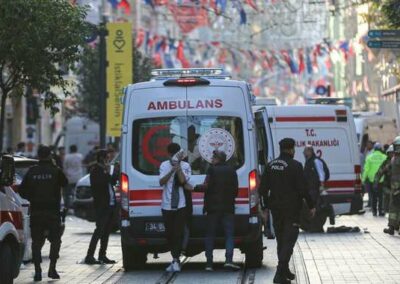 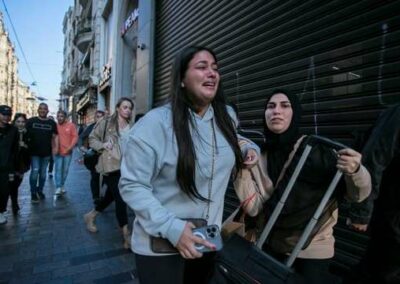 An explosion has rocked a pedestrian street in Istanbul, killing at least six people and wounding 81 others. The blast occurred at about 4:20 pm, local time on Sunday, in the Beyoglu district of Central Istanbul. Ali Yerlikaya, the governor of Istanbul, confirmed the incident and added that it could be a terrorist attack. The area where the incident happened is said to have been crowded by shoppers and tourists at the time of the attack.

Reacting to the shocking incident, President Tayyip Erdogan of Turkey described what happened on Sunday as an act of terror and promised to crush the attackers.

“Efforts to defeat Turkey and the Turkish people through terrorism will fail today just as they did yesterday and as they will fail again tomorrow,” Mr Erdogan said at a news conference.

“It would be wrong to say this is undoubtedly a terrorist attack, but the initial developments and initial intelligence from my governor is that it smells like terrorism,” President Erdogan said. “Our people can rest assured that the culprits behind the attack will be punished as they deserve.”

Soon after the incident, ambulances immediately appeared at the scene, and the police quickly guarded the area where it happened. Eyewitnesses said there was panic after the blast.

Mehmet Akus, a 45-year-old worker in one of the restaurants said: “When I heard the explosion, I was petrified, people froze, looking at each other.”

“Then people started running away. What else can you do,” he continued. “My relatives called me, they know I work on Istiklal. I reassured them.”

At least 46 people were arrested by the police in connection with the attack. Preliminary investigation revealed that a Syrian woman planted a bomb at the scene of the explosion. The suspect was among the 46 people detained as of Monday.

“A woman had been sitting on one of the benches for more than 40 minutes, and then she got up. One or two minutes later, an explosion occurred,” Justice Minister Bekir Bozdag told A Haber television.

“There are two possibilities. There’s either a mechanism placed in this bag, and it explodes, or someone remotely explodes (it),” the Justice Minister added.

While no group has claimed responsibility for the attack, Turkish authorities said the suspect, whose identity has not been revealed, had links with Kurdish militants. Interior Minister Suleyman Soylu said the order of the attack came from Kobani, a Syrian city, where the Turkish forces are conducting operations against the Kurdish militia in Syria.

“According to our findings, the PKK [Kurdistan Workers’ Party] terrorist organisation is responsible,” Suleyman Soylu said. “We will retaliate against those who are responsible for this heinous terror attack.”

Images shared by the country’s news media showed the woman leaving her seat moments before the blast. The young lady believed to be in her 20s or early 30s was arrested by the police at her residence in the early hours of Monday.

The Istanbul police said they checked 1,200 security cameras near the scene of the attack. They added that they raided at least 21 different addresses since the explosion on Sunday.

Who are the PKK?

The PKK is a terrorist organization linked with several attacks in Turkey. The group began fighting the Turkish state in 1984, demanding more autonomy for the Kurdish people. Tens of thousands have been killed since the conflict began.

To further crackdown on the group, Turkey began a cross-border onslaught on the PKK as it described it as an existential threat to the peace in the country. The fight against to group has expanded to Kurdish politicians, journalists, and activists.

Although the European Union and the United States had named the group a terrorist group, the Turkish government had previously described the Western powers as sympathizers of the militia. The recent move to block the admission of Finland and Sweden into NATO was not unconnected with members of the group that were granted asylum in these countries.

“Thousands of people – both civilian and military – lost their lives in the fight against the PKK. So the PKK and any associated element would be considered a crucial threat, and Turkey expects its allies to understand the security concerns,” Cigdem Ustun, secretary general at the Istanbul-based Centre for Economics and Foreign Policy Studies said earlier this year.

Over the years, Turkey has not held back from raising complaints about its allies’ handling of the group,  including the United States.

Turkey kicks as the US sends its condolence

The United States was among the numerous nations that sent condolences to Turkey over the explosion that took at least six lives.

“The United States strongly condemns the act of violence that took place today in Istanbul, Turkiye. Our thoughts are with those who were injured and our deepest condolences go to those who lost loved ones. We stand shoulder-to-shoulder with our NATO Ally Turkiye in countering terrorism,” White House Press Secretary Karine Jean-Pierre stated on Sunday.

In reply to the condolence sent by the US, Suleyman Soylu, the Interior Minister of Turkey, said his country would not accept the message sent by World power.

“We do not accept the US embassy’s message of condolences,” Interior Minister Suleyman Soylu said.

The rejection is Turkey’s way of countering the United States support for groups that had links with the PKK, such as the Syrian Democratic Forces (SDF).