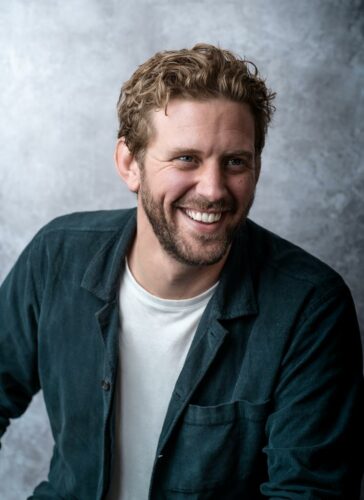 British actor Tom Pritchard who plays a ruthless businessman in HAMAFilms Antigua’s Deep Blue, will be appearing at the film’s advanced screening this Thursday, November 17, 2022, at the Montserrat Cultural Centre.

Deep Blue is the feature film for the Alliouagana Festival of the Word’s (AFW LitFest) Movie Night, which kicks off the three-day literary event.

Pritchard, who has appeared in the multi award-winning series the Crown and played the charming Prince Harry in the Windsors turns into Jeff Greenberg, a hard-hearted developer in the film.

“This is my second movie with HAMA. I love supporting independent films and unique stories. I play a foreign businessman with no regard for the conservation of the Caribbean. It’s always fun to play unlikeable characters,” said Pritchard.

HAMA is the husband-and-wife duo Howard and Mitzi Allen. They are the team behind Antigua & Barbuda’s first feature film, The Sweetest Mango (2001), which was named a Caribbean Classic in 2019 by Trinidad & Tobago International Film Festival (TTIFF) Founder Dr. Bruce Paddington. They have since made four other films, No Seed (2002), Diablesse (2005), The Skin (2011) and Deep Blue (2022).

Deep Blue is an environmental love story starring Jamaican/Canadian Peter Williams and several new faces from Antigua & Barbuda. Williams (who also starred in The Skin), plays David Hamilton, the architect behind a proposed luxury resort who falls in love with an environmentalist hell-bent on stopping the project.

“Deep Blue was a labor of love, and we hope this slice of life story will spark discussions and bring about new ways to deal with issues of conservation,” says Mitzi Allen, the film’s executive producer.

“The Caribbean is special to me, as is storytelling. Stories that are important to local communities need telling and that is why I think the work HAMA does is both unique and invaluable. Long may it continue,” added Pritchard.

Also showing during the festival’s movie night is The Fab 4: Silent Retreat, a comedy by Peter Sagnia of St. Maarten. In this short comedy, four feisty friends attempt to last an entire weekend without talking or killing each other.

Montserrat’s 14th edition of the literary festival is presented in partnership with Montserrat Arts Council, goldenmedia, Governor’s Office, Montserrat Public Library, and the Department of Environment.

Tom Pritchard’s appearance is made possible by Fly Montserrat and friends of the Alliouagana Festival of the Word.