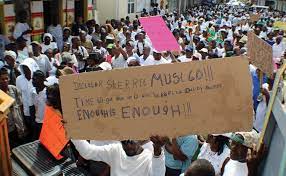 Skerrit has been under pressure from the public and even regional counterparts after he decided to call elections without a clean voters list and electoral reform.

The Opposition has opted out of the race, saying that the prime minister was abusing his power but Skerrit said the UWP was “caught with their underpants completely off” and that is the main reason for their decision

The organizers have called on all able-bodied Dominicans to assemble at Dame Eugenia Charles Boulevard, to express their “disgust and disapproval of elections and register the fact that they are standing down from this elections.”

They are also calling on the leadership of the private and public sectors to participate in the activity.

Leaders of the churches are also asked to encourage their followers to “stay away from work” and assemble at the mass rally.