More to come as hundreds participate in anti-election protest 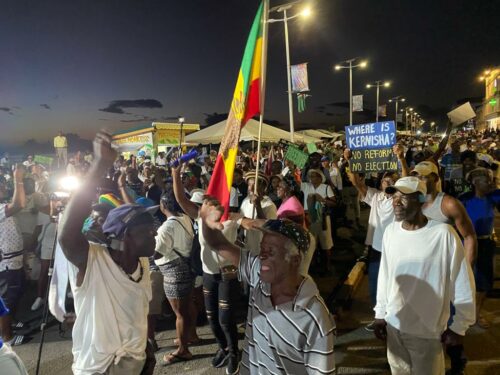 What Linton meant is that the UWP supporters should refrain from the December 6th general elections entirely.

“No reform, no more Skerrit. That is the man who has taken our electoral process, put it in his pocket, and done what he wants with it, he captured our democracy, he is the one who has forced us to be where we are…” Linton said

Hundreds of citizens came together last night to participate in what was dubbed a peaceful protest to demand the calling off of the upcoming general election in the absence of electoral reform.

Last night’s gathering according to the organizers was only the tip of the iceberg of what was to come.

“We must take a stand. Our fight now means we are not participating in his elections. We will insist on another election sometime in 2024 or 2025 before the month of May. We are not giving Skerrit elections any legitimacy by participating in it,” Linton said.

Meanwhile, Executive Member of the National Joint Action Movement (NJAM) and General Secretary of the Dominica Freedom Party (DFP) Johnson Boston said without election reform, no election should be held in Dominica.

“Jump high jump low Dominica must get electoral reform. And whether they get nominated tomorrow the movement continues. We are not stopping this movement. This movement is to clean the nonsense in this country and that is what we are about,” he said.

Boston contended that the fight to save” Dominica cannot be left to a selected few and called on all citizens irrespective of their political affiliation to also take a stance with them.

“The police, the public servants, the farmers, the unions, the youths, every Dominican, should stand up for Dominica because, at the end of it, a party may come, a party may go but our country must remain intact. And when we are attacked by those who use our democracy to be in government, when we are attacked by them we have to stand up and we have to resist the attack so they know that we here in Dominica, are not asleep and we will not stand for nonsense.”

Meanwhile Social Activist and member of NJAM Paula Celestine expressed the organization’s disgust for what she labeled as a disregard by the Prime Minister for the people’s desire for a free and fair election.

“We are here today with one voice saying no electoral reform, no elections. However, we know that in the manner in which our corrupt electoral system is designed 21 Labour Party stooges will be nominated. So ladies and gentlemen that are here we have many options… which we will not disclose,” she said

“I say to every one of you that are here, this does not end here and it should not end here” Celestine stated. “Whatever the outcome is, we are saying that we are in a democratic country and we should not stand for what Roosevelt has imposed on the people of Dominica, “ according to her.

Meanwhile Prime Minister Skerrit brushed off the UWP’s crowd, which gathered on the Bay Front, as a small group of opposition supporters from their heartland support base in eastern Dominica.

He said the small crowd sends a clear message to the international community that the Dominican people are supportive of the general election taking place.