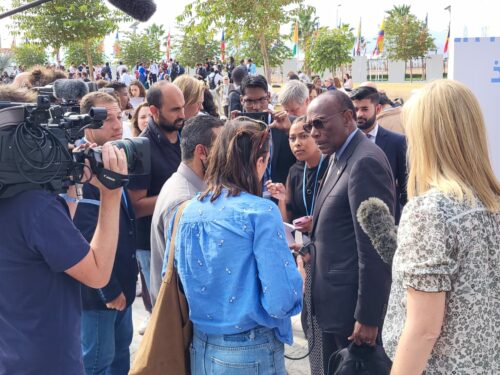 “We promised the world we would not leave Sharm El Sheikh without achieving the establishment of a loss and damage response fund. A mission thirty years in the making has been accomplished,” Sir Molwyn said in a statement to the media on Sunday.

The grueling two-week conference continued into Sunday morning in Sharm el-Sheikh, Egypt after a marathon negotiating session went through the night.

Out of the exhaustion, conflict, and compromise, ultimately came jubilation on the contentious issue of loss and damage. All 197 countries agreed to establish a financial fund for assisting developing countries that are particularly vulnerable to the impacts of the climate crisis.

The agreement sets up a transitional committee with representatives from 24 countries that will work on establishing how the fund should work, and where the money should come from.

“We have literally exhausted all of our efforts here at COP27 to bring home the climate action commitments our vulnerable people desperately need. Our Ministers and negotiators have endured sleepless nights and endless days in an intense series of negotiations, determined to secure the establishment of a loss and damage response fund, keep 1.5 alive, and advance ambition on critical mitigation and adaptation plans. But after the pain comes to the progress,” Sir Molwyn said,

According to him, “today, the international community has restored global faith in this critical process that is dedicated to ensuring no one is left behind. The agreements made at COP27 are a win for our entire world. We have shown those who have felt neglected that we hear you, we see you, and we are giving you the respect and care you deserve,”

The group of nations will then present its recommendations at Cop28 in the United Arab Emirates next year, with a view to making the fund operational.

However, Cop27 did little to cut the carbon emissions which are heating the planet, and continue to rise.

The final deal reaffirms what was said in the Glasgow agreement, resolving to “pursue further efforts to limit the temperature increase to 1.5C,” but does little to up the ambition on cutting emissions.

“Now we must solidify our ties across territories. We must work even harder to hold firm to the 1.5C warming limit, to operationalize the loss and damage fund, and continue to create a world that is safe, fair, and equitable for all,” Sir Molwyn added.

Meanwhile the UN secretary-general António Guterres praised the set-up of a fund for climate damage but also voiced his discontent with the failure of global warming targets.

“Our planet is still in the emergency room. We need to drastically reduce emissions now — and this is an issue this COP did not address,” he said.

Some speakers in the closing session, including the tearful representative for Tuvalu, echoed Guterres’ remarks in emotional final statements.

“A fund for loss and damage is essential — but it’s not an answer if the climate crisis washes a small island state off the map — or turns an entire African country to the desert,” Guterres added.