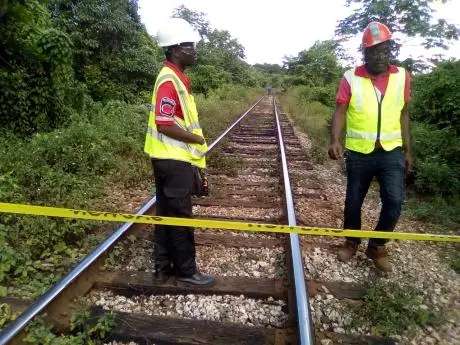 A train crash in Jamaica on Monday has left two bauxite employees dead and families distraught.

Police said that around 10 pm, a bauxite train derailed in Retreat killing two people in the process.

They have been identified as Shane Powell, a security guard of a Clarendon address, and Orlando Brown, of Brown’s Town, St Ann.

Lawmen in Kingston said that both men were aboard the train when it developed mechanical problems, derailed the track, and crashed in a gully. They received multiple injuries and died on the spot

The company, Discovery Bauxite said in a statement hours after the dreadful incident that “the company’s personnel alerted its emergency team, and first responders from the police and fire department rushed to the scene of the incident”

“We are contacting the families of the two workers and are offering them our full support and assistance during this extremely difficult period. We share their grief and offer our prayers and support for their comfort and solace at this time,” Discovery Bauxite said.

A comprehensive investigation into the cause of the derailment, the company said. That investigation will be carried out by a senior team

All rail operations have been suspended pending the completion of our preliminary assessment.