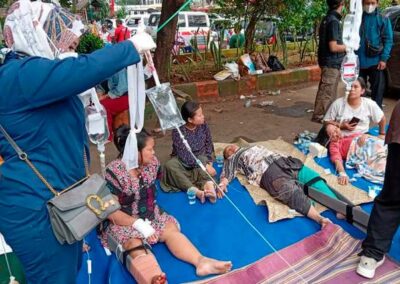 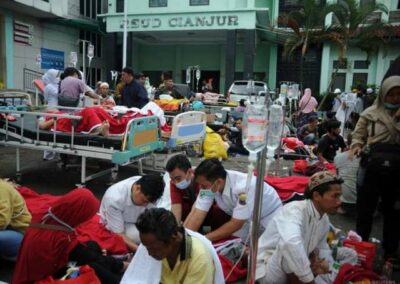 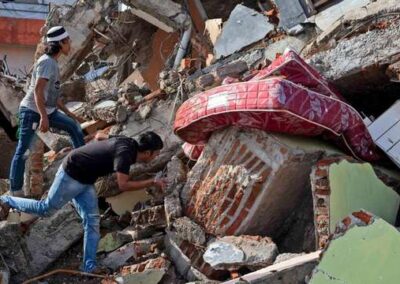 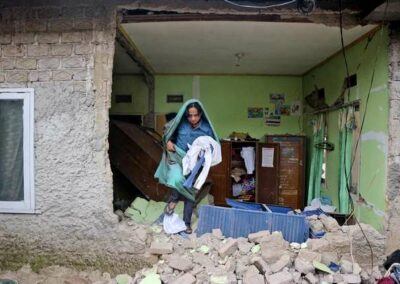 A powerful 5.6 magnitude earthquake has struck the Java province of Indonesia, killing at least 162 people and injuring at least 300 others. The disaster struck on Monday at about 1:21 p.m. local time.

Although the governor of West Java, Ridwan Kamil, confirmed the death toll of 162, he said the number of casualties could become higher with time given that many victims were still trapped. “There are residents trapped in isolated places … so we are under the assumption that the number of injured and deaths will rise with time,” Ridwan Kamil said.

Cianjur, a town located in the mountains of West Java, was the epicentre of the earthquake. About 2.5 million people live in the region, which is about 45 miles away from Jakarta, the capital of Indonesia.

The head of the Cianjur regency, Herman Suherman, said most victims died from head injuries sustained from the falling buildings.

“The majority who died were hit by buildings. Some were hit on the head,” he said.

Following Monday’s earthquake, some officials claim over 300 people sustained injuries, while others estimate the number of injured victims to be over 700. Whichever way, there are very few hospitals available to treat those injured. Even the available hospitals have become so crowded that patients are receiving treatments outside the wards. Most victims were even receiving medical attention at parking lots. Late into the night, ambulances were still bringing more people to the already overcrowded hospitals.

Pictures shared by news agencies showed patients lying on mattresses, blankets, and mats outside the hospitals. As of Monday night, injured victims were receiving treatment using torchlights as most parts of the province are now without power supply.

The search for survivors continues

Indonesian president Joko Widodo said his priority is to rescue survivors under the rubble alive. The president who visited the region said: “My instruction is to prioritise evacuating victims that are still trapped under rubble.”

However, barely one day after the deadly quake, many victims are still trapped under the rubble. While some have been brought out alive, others have been brought out dead. For some, the search is still meaningless as members of their families have not been confirmed to be either dead or alive.

For Cucu, a 48 years resident, her joy was still not complete despite rescuing two of her kids because one was still missing.

“Everything collapsed beneath me and I was crushed beneath this child,” Cucu told Reuters tearily. “Two of my kids survived, I dug them up … Two others I brought here, and one is still missing.”

Zainuddin, another resident from the affected area, said: “At least six of my relatives are still unaccounted for, three adults and three children.”

Ricky Susan, a local journalist, said he was at a military barracks having a coffee when the disaster struck. Although he survived without a scratch, what he saw next was heartbreaking.

He said: “I saw a group of the minimarket employees standing outside the ruins, and they were all crying. They told me that one of them didn’t make it out and was buried in the rubble.”

Henri Alfiandi, head of the Indonesian National Search and Rescue agency, said the rescue workers are facing several challenges in the affected areas. The first is that the affected area is spread out, making it difficult for emergency workers to cover the wide territory. Another challenge is the difficulty in accessing the villages because of the conditions of the roads.

Mr Alfiandi said about 13,000 people have been evacuated, but families were still reporting missing relatives, many of which were at school at the time of the incident.

“Most of the casualties are children because at 1 p.m. they were still at school,” he said.

Officials are worried that at the end of the rescue operations, the death toll could be much higher than the already scary figure.

Earthquakes are not new, but this was new

An earthquake striking Indonesia is almost not breaking news because of the country’s location. The country sits on what is called the “Pacific Ring of Fire,” which is highly prone to earthquakes. Different plates of the Earth’s crust meet at this point causing large earthquakes and volcanoes.

Since Monday’s earthquake, smaller quakes have occurred in the same region but without major damages.

“Until now, the earthquake still happens, but not as big as before. A minute ago it happened again. Many people don’t want to stay at their homes,” Ima Mafazah, a volunteer with the Indonesian Red Cross,  said. She added that tremors continued until late Monday.

“If it was just an earthquake only the houses would collapse, but this is worse because of the landslide. In this residential area there were eight houses, all of which were buried and swept away,” Zainuddin said.

There are also fears that the aftermath of the quake might trigger further damages because, in 2004, a 9.1 magnitude earthquake struck northern Indonesia, which triggered a tsunami in 14 countries, killing approximately 226,000 people.

The Governor of West Java province said there was a need to remain vigilant as the country is in a disaster season, which is the end of the year.

“We need to remain vigilant,” Ridwan Kamil said. “This is disaster season at the end of the year, which is frightening.”

Authorities have already warned of major landslides should heavy rains fall in the coming days. Hence the ultimate goal is to evacuate as many residents as possible.