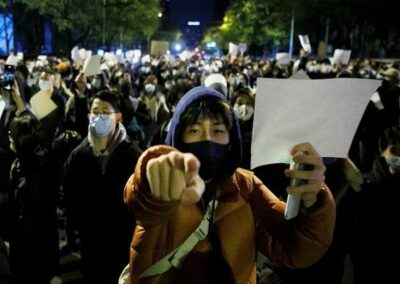 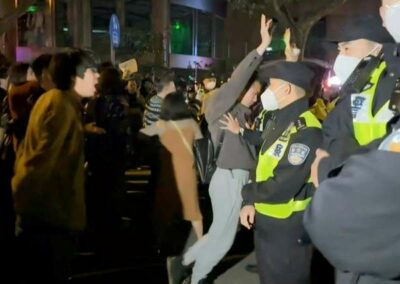 The zero Covid policy in China meant to keep citizens at home has forced thousands of Chinese into the streets, demanding an end to what they describe as suppression of their fundamental human right of free movement. The protest, which began on Friday, had spread across major Chinese cities, especially in Shanghai and Xinjiang.

On what triggered the protest, one Twitter user wrote: “One significant trigger for the protest was a deadly fire in a residential building,” adding that the zero Covid policy made it impossible for fire engines to reach the area of the fire, causing dozens to die.

The residential building was locked by officials enforcing the zero-Covid policy. Secondly, since most residents have been at home for the past 100 days, their cars were outside the apartment, blocking the way of firefighters who arrived a few minutes after the fire broke out. According to reports, it took the firefighters more than three hours before gaining access to the building, which was too late, as at least ten people died before that time.

Also, last week, the Zhengzhou government apologized for the death of a girl believed to be four months old, who died in quarantine. According to the girl’s father, he couldn’t take the daughter her daughter to the hospital because ambulance officials refused to help because she tested positive for Covid-19.

Despite growing discontent concerning the Zero-Covid policy and its effect on the Chinese economy, the Chinese government has continued to forcefully implement it against the will of the majority of the people. However, for the first time, the Chinese people seem to have gotten enough of the Covid-19 drama.

“I’m here because I love my country, but I don’t love my government,” one protester told Reuters. “I want to be able to go out freely, but I can’t. Our COVID-19 policy is a game and is not based on science or reality.”

Another protester said: “We just want our basic human rights. We can’t leave our homes without getting a test. It was the accident in Xinjiang that pushed people too far.”

While most countries have allowed things to go back to normal since there is a maximum supply of vaccines, the Chinese government adopted the method of coercing citizens to stay at home, even if it means not having enough to eat. Unless there is an emergency health situation, citizens in affected areas cannot step out and are even compelled to work from home.

The calls for Xi’s resignation

As the demonstrations progressed, more and more agendas are added to the list. Some protesters have graduated from demanding an end to the Zero covid policy to calling for the resignation of the country’s president and the entire communist party.

Videos posted on social media showed protesters chanting: “Down with the Chinese Communist Party, down with Xi Jinping.”

In a country where protesting is almost illegal, the calls for Xi’s resignation would no doubt be handled decisively by the government. Dan Mattingly, an assistant professor of political science at Yale University, said those frustrated by Xi’s recently secured third term are only expressing what has been boiling for a long time, and the government might soon react aggressively.

“This will put serious pressure on the party to respond. There is a good chance that one response will be repression, and they will arrest and prosecute some protesters,” Dan Mattingly told Reuters.

Cracking down on the demonstrations

Although there are no official records, Antigua news confirmed that some protesters have been arrested since the demonstrations began last week. There is a high-security presence in most places where there are demonstrations.

One protester said he was almost arrested for protesting if not for the crowd that pulled him away from the Police.

“The people here aren’t violent, but the police are arresting them for no reason. They tried to grab me but the people all around me grabbed my arms so hard and pulled me back so I could escape,” the protester said.

On Sunday, Zhao, one of the protesters, told AP news that one of his friends was beaten by the police and two others were pepper-sprayed. He said he lost his shoes while trying to escape from the police.

On Sunday, the Police occupied a road in Wulumuqi where a candlelight vigil was held. The night event soon turned into a protest despite the presence of Policemen. However, there was no sign, at least for now, that the police used firearms against the protesters.

The most likely reaction from the government

China has not witnessed a large-scale protest for many years. It is not because there is no cause for protest, but because the government of China does not tolerate any form of protest.

Even on social media, posts criticising Xi’s government and the communist party are monitored and removed so that the country’s leadership is not portrayed in a bad light.

If the protest continues for a long, the government will unarguably react with the use of force. Ma Xingrui, Xinjiang Communist Party Secretary, had already called on security men to step up security and halt the growing “illegal violent rejection of COVID-prevention measures.”

In 1989, thousands of protesters were murdered in Tiananmen Square when students began an unending protest against the government. While the current situation is unlikely to reach that stage, there are fears that further crackdown on the protesters could be worse than what has been seen already.

The zero-Covid policy is not necessarily bad. It is the government’s way of suppressing the infection rate of the virus until there is zero Covid in China. The purpose of the policy is to curb the spread of the virus before it reaches the larger population. While the government sees it as the best approach, the citizens think the government’s implementation is too harsh. In some parts of the country, some neighbourhoods are sealed off because of a few persons testing positive for the virus.

In Shanghai, for several months, more than 25 million residents were barred from leaving their homes for several months except for medical emergencies. It was recently that the government eased the restrictions when fewer cases were reported. However, a recent surge in numbers has sent most residents back to their homes.

In Beijing and other parts of the country, some residents received notices barring them from leaving their homes because the government wants to reduce the rate of infection to zero.

The citizens feel the government is not doing enough to ease the pains and sufferings of the people they prevented from coming out, as there is no adequate supply of medicines and food. Hence the calls to end the draconian policy.

The Chinese government is well aware of the effect Covid-19 could have on the country should the Covid laws be relaxed. A recent relaxation of the led to a record number of cases since the virus started in Wuhan in late 2019. The country recorded 31,527 cases on Wednesday, which was about 3,500 cases higher than the previous peak of 28,000.

While the Chinese government sometimes attempt to yield to the wish of the people, such unwanted records sometimes compel it to hold on to the policy, as it is the only way to reduce the death toll significantly.

In comparison to the United States, the UK, and other first-world countries, China has recorded the lowest number of deaths, partly attributed to the government’s ruthless handling of the situation. Since the pandemic began, a little more than 5,200 people have died of the virus in China. That means in every 1 million people, as little as three deaths have been recorded.

In the United States alone, a staggering 3,000 per every million have died from the virus, while it is a little lower in the UK, with 2,400 deads per one million.

While there are discomfort that comes with the zero-covid policy, even the protesters would not deny the fact that it has saved thousands, if not millions, of lives. The people are now stuck between staying at home and saving more lives.