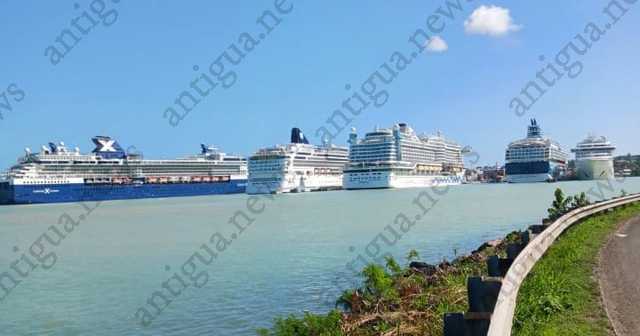 Tourism officials and even the office of the prime minister were in a frenzy this morning when five cruise ships scheduled to berth at the St Johns Habour were nowhere in sight.

According to reports, the 5 cruise ships scheduled to Berth at the St. John’s Harbor were stalled by what sources say was a floating dredge line.

The vessels were scheduled to dock as early as 6:15 a.m.

According to sources at the port, the sunken dredge line was afloat and blocked the entrance of the channel, preventing any vessels from entering or departing the Harbor.

At approximately 6 a.m the chief pilot, along with the senior and Jr pilots and crew proceed to the mouth of the Harbour to bring the 5 cruise ships. At that time, they realized that the hose was afloat.

Suggestions were made by the all pilots and others on how to re-sink the line.

Sources say attempts were made but failed, prompting two small fishing boats Lady Lucy and another unnamed vessel to assist

Along with the Port’s diver, Horace they were able to successfully re-tie the line allowing it to sink.

The team was then mobilized and ships began to successfully enter the channel.

Many calls from the Port’s chairman, Prime Minister Gaston Browne and tourism officials flooded the port, demanding answers on the missing ships.