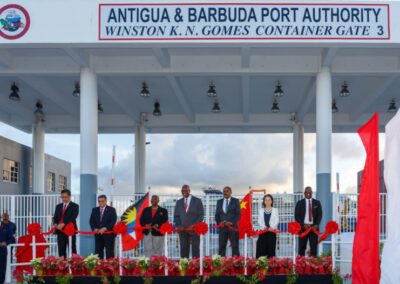 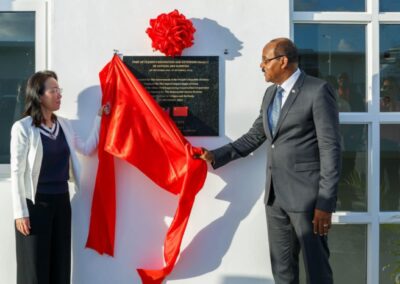 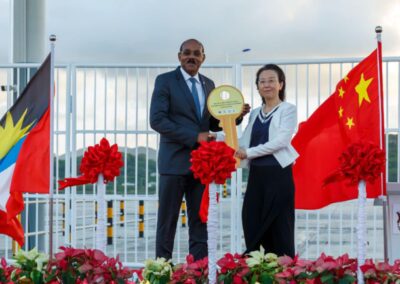 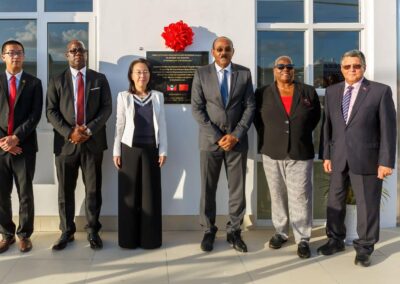 Antigua and Barbuda’s Port Authority has emerged as a beacon of light in the marine environment in the Caribbean and the country’s leader Prime Minister Gaston Browne foresees, that it will become the only container terminal port within the Organization of the Eastern Caribbean States (OECS)

Yesterday, the Chinese government officially handed over the keys to the US$90 million-dollar facility to the government, a project that was plagued with setbacks, the most significant being the Covid-19 pandemic.

But after years of nonstop work, the chic-looking port facility is now complete.

PM Browne said the port now has the ability to provide services to neighboring islands.

“The port project is one of the finest projects within the entire Caribbean and certainly within the OECS. It is now poised to be a significant transshipment port within the North Eastern Caribbean, providing services for the neighboring countries,” he said.

Browne said several shipping lines are already negotiating with the management of the port to provide logistics as well as transshipment services for the sub-region.

“We are also holding discussions with other destinations including Panama and even Guatemala to determine whether we can have some kind of collaboration in order to enhance the level of transshipments that will take place here at our facility,” Browne said

He said the new facility will also help to increase the revenues of the port in coming years, which Browne said will have a domino effect.

“As we grow revenues it means that we will continue to expand the economy and provide more opportunities for Antiguans and Barbudans,” he added.

The prime minister recalled that the Port, in its former state, was decrepit, the walls of some sections were falling into the sea and the cashflows were such that salaries and wages could not have been paid on time.

Meanwhile, the Chairman of the Board of Commissioners at the Antigua and Barbuda Port Authority Marie Clare Hurst, said the years have been challenging, but “determination and the best governance structure, provided the impetus for us to forge on,” she said.

And Port Manager Darwin Telemaque said echoed similar sentiments, saying that there were always signs that Antigua’s future was maritime.

In January 2018, the government awarded a contract to the China Civil Engineering Construction Corporation (CCECC) to construct a cargo port and cruise ship harbor.

And now, the port can boast of a new cruise berth, as well as cargo and logistics facilities and other amenities.