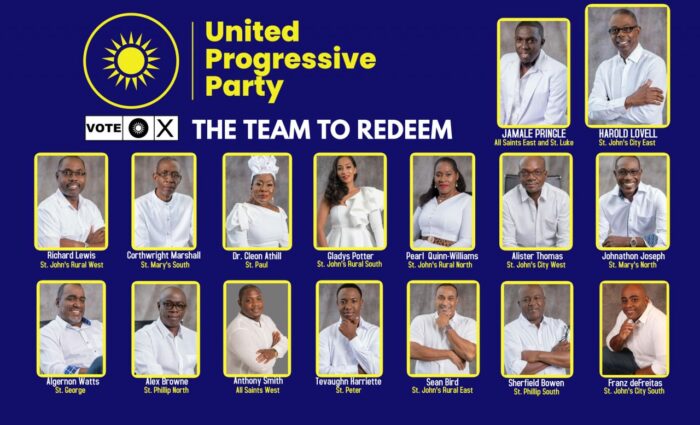 The ruling Antigua and Barbuda Labour Party (ABLP) has questioned the viability of a United Progressive Party (UPP) shadow cabinet, drawn from the nominated candidates which that opposition party has put forward for election.

One of the UPP candidates had been extremely critical of the quality of the candidates put forward by the UPP, previously; he expressed publicly his view that the UPP team lacked substance and would not be fit for cabinet positions.

The team put forward by the UPP in that pending election contained a few talented members/candidates, five years ago. In the 2023 General Election, 12 days away, the UPP Team is bereft of talented members.

For this reason, the UPP has not identified a “shadow cabinet,” the ABLP believes.

The fear of the UPP in revealing its choices is based on the absent skill-sets, missing from the UPP team.

Although Mr. Lovell served as the Minister of  Finance in the second term of the UPP, 2009 to 2014, his performance was so poor, that he ought not name himself to this position—not as a shadow minister!

The ABLP wonders aloud who would be the UPP Minister of Foreign Affairs, selected from among its 16 candidates. All countries are very careful in their choice of a Foreign Minister, given the importance of inter-state relations in this rapidly evolving world. The UPP does not have a viable candidate to fill this slot, nor any of the demanding portfolios.

The ABLP is very much aware that Mr. Lovell has been addressing every subject-area raised by the media or by the UPP’s political opponents, disallowing his colleague-candidates from addressing issues of any sort.

It is patently unfair to the electorate of Antigua and Barbuda for the UPP to attempt to conceal its inherent weaknesses from a prying public. Maybe Franz would serve as Foreign Minister, given his trail of “successes” in the USA.