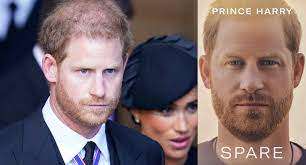 Ahead of the much anticipated release of Prince Harry’s autobiographical memoirs, in his book entitled “Spare” due out on 10 January, a reporter for the US edition of The Guardian has stated in print that he has been able to obtain a copy of the book, despite rigorous security measures being put in place by publisher Penguin Random House, who were determined to avoid any leaks of what is already a best-seller, on pre-sales alone.

Journalist Martin Pengelly, who writes for the newspaper’s website has given snippets of the content, in which he reports of a passage that tells of an altercation between Harry and his brother William, which the Duke of Sussex apparently claims was a “physical attack”, which left him “knocked to the floor”, and “dazed”.

Before the official launch, there are also two TV interviews being aired on 8 January, one on each side of the ‘pond’, in which the prince speaks to CBS 60 Minutes and ITV. The book, ghostwritten by memoirist JR Moehringer, and part of a multi-million dollar deal, was previously believed to be subject to the upmost secrecy, with few details known about its content.

While publishers at Penguin Random House are yet to confirm whether the leaked excerpts from the book are genuine, they recently called it “a landmark publication for Harry to tell his story at last.” They claim the book is: “full of insight, revelation, self-examination, and hard-won wisdom about the eternal power of love over grief.”

The book follows swiftly on the heels of the Netflix series, which Harry put together, alongside his wife Meghan Markle, in which he displayed large degrees of bitterness towards his family in a very one-sided account, and early indications are that this publication has been another opportunity for the resentful prince to vent his anger and disillusionment.

The chapter that has got media attention ahead of the release is one in which Mr Pengelly says that the Duke of Sussex writes of a conversation between William and himself that took place at Harry’s cottage in the grounds of Kensington Palace, back in 2019.

Seemingly, the now Prince of Wales, complained about Meghan, describing her as “difficult”, “rude” and “abrasive”. This led to a shouting match in which Harry apparently accused his elder brother of acting like an heir, and unable to understand why his younger sibling was not content to be a spare. Insults were said to be exchanged, with Harry questioning his brother’s claim to be trying to help.

Altercation leaves Harry on the floor

Harry is quoted as saying that William became angry and stepped towards him, grabbed him by the collar, a move which ripped Harry’s necklace, and the younger prince ended up on the floor. He says he landed on the dog’s bowl, which cracked under his back, with some pieces cutting into him. This fall had evidently left him “dazed” and shocked especially as his big brother urged him to “hit back”, an invitation that he says he declined.

Mr Pengelly says Harry goes on to claim that William looked regretful and apologised, asking the Duke of Sussex not to mention the incident to Meghan, to which Harry apparently replied: “You mean that you attacked me?”

It seems that he then goes on to write that he did not immediately tell his wife… but he did call his therapist!

Any reconciling could now be beyond repair

If this is a true passage, then there has to be serious doubts that the brothers relationship can ever recover and any slight hope of a reconciliation could be fractured beyond repair. Most siblings fall out at some time or another; they have disagreements which can escalate into arguments, which can then sometimes get physical, it is what families do.

What they really should know better about doing is putting it into print in a book that is guaranteed to be read all over the world, especially when the individual being spoken about is the future King of England.

Mr Pengelly said he did not approach Prince William’s communication team, preferring to take the stance that his article was a “report on Harry’s book, which he’s written, it is Harry’s account.” He continued: “We carefully did not call it a fight because Harry says he did not fight back.”

He tells of the Duke of Sussex speaking openly in the book about the controversy surrounding the now famous Oprah Winfrey interview in 2021, the personal and private matters involving his wife, particularly the suggested “racism within royal circles” and Meghan’s “suicidal thoughts”.

He is also said to talk about the “documentary” that they did for Netflix, although that term should be used loosely, as a true documentary hears both sides of a story, whereas that six-parter only came from one angle, so a more accurate description would have been a “reality show”.

For a young man who appeared to have a good sense of humour and was so full of fun in his younger years, his troubles and deep rooted resentment have seemingly caught up and got the better of him. Consumed with acrimony, he displays examples of contradiction and irrationality, by claiming to want to escape publicity, as he stated when he ran away, firstly to Canada, and then on the California; but instead of settling down for the “quiet life” he evidently craved, he has chosen to remain in the spotlight.

“Explosive” interviews on the way

The interviews that will go out at the weekend were conducted by Tom Bradby from ITV and Anderson Cooper of CBS 60 Minutes, and are described as “explosive”. Harry is seen in a short trailer to say: “I would like to get my father back, and I would like to have my brother back.”

In another short clip the Duke of Sussex claims he was “betrayed” along with “briefings, leaks, and planting of stories against me and my wife”. In another he comments on what he sees as a “betrayal” from Buckingham Palace.

In a second trailer Prince Harry said he could not see himself returning to the “institution” as a full-time royal, and that he wanted a “family, not an institution.” Going on to make the accusation that: “They feel as though it is better to keep us somehow as the villains”.

He does appear to have adopted a blinkered outlook on people’s perception of his approach, and might want to consider that he may have ‘burned too many bridges’ to have any chance of a return, even if he should want to.

It was always going to be full of controversy

The book’s title comes from an old saying in royal and aristocratic circles: that a first son is an heir to titles, power and fortune, and a second is therefore a spare, should anything happen to the first-born.

The “tell-all” publication is said to be raw and unflinching throughout its 416 pages; but having reportedly signed a $20million (£16.6million) four-book deal, then it can be imagined that the publishers wanted some gritty material to get their money’s worth.

Leak will be a blow to meticulous planning

In conjunction with his publishers, Harry had it was reported, gone to great lengths to ensure the book would be published simultaneously around the world on 10 January, with deliveries to bookshops being scheduled to be last-minute to avoid unauthorised copies being leaked.

Therefore, today’s news of an article containing extracts being printed in the US will probably come as a massive disappointment. It is being released in 16 languages, with the audio edition of the book being read by Prince Harry himself.

Similarities with other “Harry”

Comparisons have been made to when in 2007, JK Rowling was so determined her young fans would not have their experience spoilt by learning of Harry Potter’s fate, before getting the chance to read the seventh and final novel – the Deathly Hallows – in the children’s fantasy series of books,  she arranged a host of sophisticated security measures.

Satellite tracking systems were fitted to lorries to ensure no vehicle deviated from intended routes and binding legal contracts were deployed to protect the ten million first copies.

Raising family in the States

The Duke and Duchess of Sussex announced that they would step back from royal duties back in 2020, with at the time, senior royals expressing their disappointment at the announcement. They now live in the US with their two children, son Archie and daughter Lilibet.

Mr Pengelly mentioned a revelation from the very front of the book. Harry recounts a tormented meeting he had with his father and brother after the funeral of Prince Philip at Windsor Castle. Charles he says, stood between the siblings and “looking up at our flushed faces”, he remonstrated: “Please, boys. Don’t make my final years a misery.”

Sadly, the early signs from this publication are that King Charles III misery is about to get a whole lot worse.