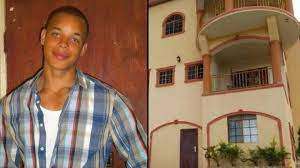 A British national who was murdered at point blank range on Monday 2 January, was very likely to have been the victim of a “contract killing that emanated from Britain”, according to the Caribbean island’s Deputy Commissioner of Constabulary.

Sean Patterson died from gunshot wounds he received to his head and upper body when he was shot in broad daylight, close to the pool area of his holiday accommodation, in Bogue Hill, St James. Although taken to hospital, 33-year-old Mr Patterson could not be revived and sadly died of his injuries.

A Foreign Office spokesperson said they were supporting the family and were in contact with the local authorities. A 34-year-old man has been taken into custody for questioning.

Shot on the pool decking

As the story unravelled, it seems that Mr Patterson, a personal trainer from Shepherd’s Bush in west London, was approached by a man at around 11:45 local time (16:45 GMT) as he stood on the pool deck at his “One Love” Villa. The man was carrying a handgun a witness reported, and he proceeded to chase and then shoot Mr Patterson several times.

Dead man’s movements in lead up to attack

Deputy Commissioner of Police Fitz Bailey said in a video statement on Wednesday 4 January that Mr Patterson has previous convictions in the UK for drugs, violence and firearm offences. He detailed the dead man’s movements in the days leading up to the shooting.

Arrived at villa day before

It seems that Mr Patterson had arrived in Jamaica on Thursday 29 December in the company of another man who was also from London, on board a Virgin flight. The two men initially spent three days at a popular apartment complex in Freeport, before moving to the villa in Bogue Hill on New Year’s Day.

Meet up with local man

There they met up with a third man, Oshane Richards, who was a local Kingston resident, although previously of the UK, from where he had been deported in 2013, after serving three years in jail for crack cocaine possession. The men each had a separate room and it is believed they had met up to attend a concert on January 1, in Priory, St Ann’s.

Witness flees to safety of nearby bushes

On the morning of 2 January, Mr Patterson and Mr Richards had both arrived at the pool deck shortly before midday and were both talking on their mobile phones. Mr Richards told the Jamaican Constabulary Force (JCF) that he was sat with his back to Mr Patterson when he heard  “loud explosions” that he believed to be gunshots.

On turning around he saw a man dressed in a black hooded sweatshirt with a handgun, which he proceeded to use to shoot Mr Patterson. The witness said he fled the immediate area straight away and hid in some nearby bushes.

Mr Bailey confirmed that Officers from Montego Bay Police Force attended the scene and found Mr Patterson “clad in grey shorts on his back. lying in a pool of blood, with what appeared to be gunshot wounds to the upper body and head”. He added: “From credible evidence received, Sean Patterson is well-known to the UK authorities and has an extensive criminal record for a number of offences, which include narcotics, violence and firearms.”

He said there was no evidence of a robbery, or indeed that Mr Patterson had any connection in Jamaica; before theorising that the murder was: “a contract killing that emanated from Britain.”

An investigation began instantly with significant progress coming when one man was taken into custody and the JCF will continue to work their international partners, including the UK police over the next few days.

Mr Patterson’s mother, Lesley Wright, was naturally distraught at hearing of her son’s violent death saying: “I have lost my baby. No mother should have to bury her child.” She confirmed that Mr Patterson had family in Jamaica on his father’s side, and had travelled to the Caribbean with her godson.

At a loss to understand any motive behind his shooting she declared her son: “The loveliest, sweetest boy and the kindest most happy-go-lucky-man and not the argumentative type.”

Mr Patterson was apparently due to marry his long-term girlfriend later this year.

First murder of year in parish

Mr Patterson is the first person to have been murdered in the parish of St James this year, with the suburban area reporting a total of 198 murders in 2022.

Jamaica as a whole meanwhile reported 1,421 killings out of a total population of 2.8 million people at the start of December, already ahead of the 1,375 killings for the same period the previous year, with still a month’s statistics to add.