Kevin McCarthy becomes Speaker of the US Congress after 15 rounds of voting, the longest in over 100 years 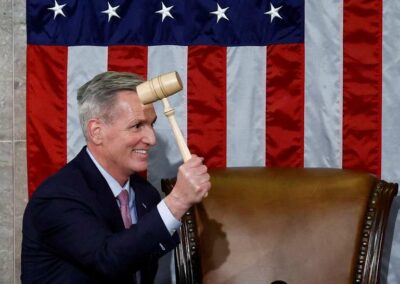 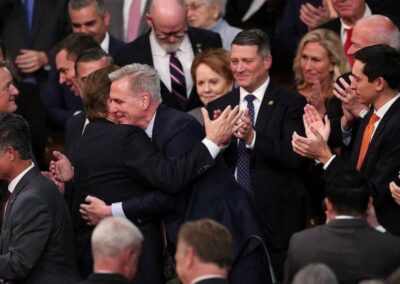 Kevin McCarthy is the new Speaker of the United States Congress after days of voting without results. After failing to secure the speakership in 14 rounds of votes, the Republican Rep got 216 votes in the 15th round, making him the new leader of the US Congress and the third most powerful citizen in the country, only after Vice-President Kamala Harris.

“As for the Chinese communist party, we will create a bipartisan select committee on China to investigate how to bring back the hundreds of thousands of jobs that went to China, and then we will win this economic competition,” McCarthy stated.

With 222 Republicans in the House, one would expect a swift victory for McCarthy. Unfortunately, some Republicans choose to revolt against the California Rep with their votes. In the first round of votes, the new speaker got 203 votes out of the required 218 votes after 19 Republican legislators backed either Rep Andy Biggs or Jim Jordan. In the second round, all 19 Reps queued behind Jim Jordan, a right-wing Republican from Ohio. McCarthy’s ordeal went from bad to worse after he lost the support of one more legislator in the third round, and Jordan gained 20 votes.

Although Jordan doesn’t look like a contender in the race, the 20 votes he and his men withheld were enough for the House to vote 15 times before the emergence of a winner. McCarthy went into negotiations with the dissenting Representatives. McCarthy is said to have made some concessions as he continued to pull more votes going forward. However, there was one man who stood in his way until the last minute. His name is Matt Gaetz.

Matt Gaetz, the Republican with too many demands

As McCarthy continued to search for more votes, he narrowed the opposition bloc within the Republican Reps caucus to six legislators. However, one man on top of the list of those opposing McCarthy’s speakership bid was Matt Gaetz.

McCarthy had managed to convince some Republicans to vote “present,” which would narrow down the required number of votes to a lesser figure than 218. However, Matt Gaetz will need to vote “Yes” before McCarthy could emerge as speaker. It was certain Matt would break the tie in the 14th round of votes, but surprisingly, he opted to vote “Present,” which resulted in an embarrassing moment for McCarthy and his party.

Before voting in the 14th round commenced, Rep Gaetz said Kevin McCarthy had agreed with all his demands, and there was almost nothing to ask.

“We may have a few finishing touches. We may be able to get this resolved tonight,” Gaetz stated. “I like a lot of that. I got to tell you, we’re running out of things to ask for. The leader has been very thorough in some of these responses to our demands.”

His statement came to many as a surprise after he had earlier described McCarthy as a “desperate guy whose vote share is dropping with every subsequent vote and I’m ready to vote all night, all week, all month, and never for [McCarthy].”

However, after McCarthy’s failed attempt in the 14th round, the decision for a 15th round depends on if Gaetz will vote “Yes” or not. A move for adjournment failed after he reportedly agreed to flip his vote in favour of McCarthy.

When asked why he changed his mind and voted for McCarthy, Gaetz said: “I ran out of things I could even imagine to ask for.”

“I’m glad it’s over,” McCarthy expressed relief after the 15th round. He, however, insisted that neither Gaetz nor any other member of Congress was promised anything.

“No one gets promised anything,” McCarthy added. There are claims that Gaetz has demanded the chairmanship of a major committee, but there is nothing, at least for now, that confirms the claim.

A united but minority Democratic Party

From the first round of votes to the final round, the Democratic party unitedly supported its leader, Hakeem Jeffries. He was the first black leader of House Democrats. In all fifteen rounds, all 212 Democrats in the House voted for the 52-year-old who recently took over from Nancy Pelosi.

At some point, he got more votes than McCarthy, but it was certain all along that a Republican would become the speaker because the other side had the minority.

Despite his various ordeals, Donald Trump remains an undefeated leader of the Republican Party. His calls to dissenting congressmen and women could have played a role in their decision to flip their votes in favour of McCarthy.

During one of the chaotic votes, a congresswoman was seen giving the phone to a congressman. The man on the phone was Donald Trump. Such calls could have convinced some Republicans to support McCarthy.

“He was with me from the beginning,” McCarthy said when asked about Trump’s role in his victory. “Somebody wrote the doubt of whether he was there — and he was all in. He would call me and he would call others. I was just talking to him tonight — helping get those final votes.”

Trump, who had earlier declared his support for McCarthy, was among the first to congratulate him on his victory, describing it as different from the conventional way.

“The ‘Speaker’ selection process, as crazy as it may seem, has made it all much bigger and more important than if done the more conventional way. Congratulations to Kevin McCarthy and our GREAT Republican Party!” Trump wrote on Truth Social.

Biden congratulates McCarthy, but though days await him

President Joe Biden, for the last two years, has enjoyed the support of the US Congress, especially as his party had the majority in the House. Following the November mid-term elections, the Democratic party lost its majority, and that could make the last two years of Biden’s presidency a tough one.

However, he and his wife congratulated the new speaker, adding that he was ready to work with him.“

“Jill and I congratulate Kevin McCarthy on his election as Speaker of the House. As I said after the midterms, I am prepared to work with Republicans when I can and voters made clear that they expect Republicans to be prepared to work with me as well. Now that the leadership of the House of Representatives has been decided it is time for that process to begin,” Biden wrote.

McCarthy had insisted on investigating Hunter Biden for allegedly seeking huge sums of money for lobbying purposes when his father was Vice President of the United States. The leadership of the Republican party in Congress has also vowed to stand in the way of some of Biden’s policies, including his borrowing plans.

How they can work harmoniously will become known when Congress reconvene on Monday.

For over 100 years, no Speaker of the house had been elected with 15 rounds of voting. McCarthy, on Saturday, became the first man since 1923 to go past nine rounds of voting. It took several days and nine rounds of votes before Frederick Gillet was elected to the post that year. In 1860, it also took 44 rounds for a speaker to be elected. McCarthy’s record has come between these two.

However, the longest speakership contest in US history was in 1856, when it took 133 rounds before the 34th speaker was elected.