Bolsonaro admitted to a hospital in the US as police arrested 1,500 of his supporters 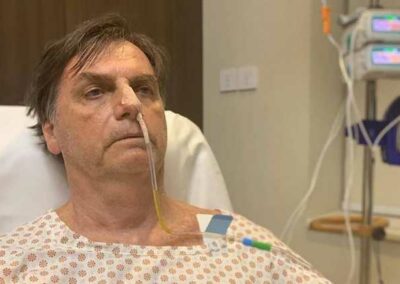 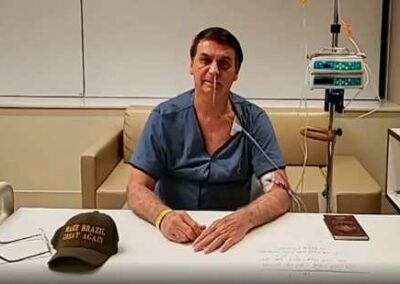 Brazil’s immediate past President, Jair Bolsonaro, has been admitted to a hospital in the United States. His wife said he was suffering from “abdominal pain.”

“My dear ones, I come to inform you that my husband Jair Bolsonaro is under observation at the hospital due to abdominal discomfort resulting from the aftermath of the stab wound he received in 2018 from a former member of the [Brazil’s Socialism and Liberty Party],” Michelle Bolsonaro, wife of Jair Bolsonaro,  wrote on Instagram on Monday.

“We are praying for his health and for Brazil. God bless us,” the former first added. However, Bolsonaro’s doctor said there was no cause for alarm, and the former president would not need surgery this time, adding that it was an intestinal blockage.

One month before the 2018 Brazil presidential election, Bolsonaro was stabbed in the abdomen during a campaign rally in the state of Minas Gerais. Since then, he has been in and out of hospitals and has had several surgeries after sustaining injuries in his small and large intestines.

Then 40-year-old Adelio Bispo de Oliveira was the suspect. However, he was not prosecuted by the police because he was confirmed to be mentally unstable. He even claimed to be “fulfilling an order from God.”

During his time as President, he was in and out of hospitals, as he continues to battle the effects of the 2018 stabbing.

How long can Bolsonaro stay in the US?

Bolsonaro was said to have entered the United States two days before the end of his tenure with a visa issued to only heads of state, diplomats, and other top government officials. However, the former Brazilian leader is no longer a head of state nor is he a government official. His stay in the United States is becoming an issue of debate, as some are calling for his expulsion.

During a press conference on Monday, the spokesperson of the US State Department, Ned Price, refused to discuss Bolsonaro’s situation over privacy rules. But he explained that anyone who entered the US on a temporary visa must adjust his status with the Department of Homeland Security before the expiration of his visa or request a new one. Failure to do that would result in deportation from the country.

“If there is a law enforcement matter that needs to be adjudicated between the United States and Brazil, we have well-honed, well-practised processes for doing so. And we’re prepared to do that,” Price said.

For now, there is no indication that Bolsonaro will return to Brazil because the man in power might not spare him. His stay in the United States might be a temporary one too. But his next move remains unknown.

1,500 of his supporters detained

Following Sunday’s invasion of government buildings in Brasilia by supporters of Bolsonaro, the Police detained approximately 1,500 supporters of the former president. His supporters continue to claim that last year’s presidential elections were rigged in favour of Lula Da Silva and are calling for a fresh election and the intervention of the military. On Sunday, they invaded the country’s parliament, presidential palace, and the Supreme Court in protest of Lula’s presidency.

The world had unitedly condemned the attack, and the military and the police dismantled several camps used by the supporters of the former president in the capital of Brazilia. Calm has returned, but everything is still not perfect.

“There are still people trying to block roads and access to oil refineries,” presidential spokesman Paulo Pimenta said on Monday.

President Lula Da Silva vowed to deal with those behind the recent destructions, but it is still unclear if Bolsonaro was directly involved.