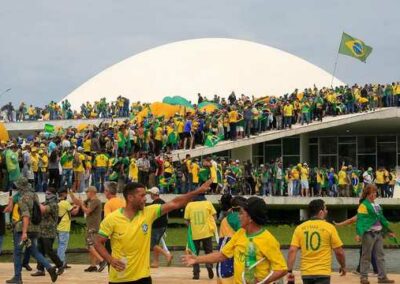 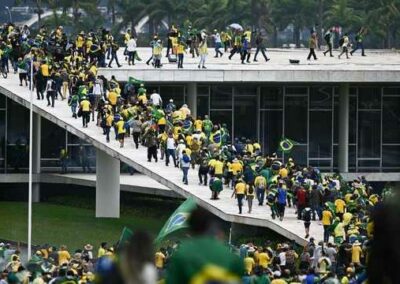 Supporters of the immediate past Brazillian President Jair Bolsonaro have stormed the country’s presidential palace, Supreme Court, and Parliament in protest of the recently conducted election, which produced Lula Da Silva as President.

The supporters, in hundreds, if not thousands, evaded security blocks in Brasilia to damage parts of the various buildings. President Lula Da Silva, who became president last week, described the rioters as “fascist fanatics” doing something that had never been seen in the country’s history.

“We will find out who these vandals are, and they will be brought down with the full force of the law,” he added.

Lula, who was in the city of Araraquara at the time of the invasion, immediately signed a decree ordering a federal intervention in Brasilia. The presidential order also gave special powers to the local police to restore law and order in the city.

Dressed in their yellow jerseys, the crowd was obviously more than what the local police could handle hence the need for federal intervention.

“I’m here for history, for my daughters,” Lima, a 27-year-old protester, told NDTV. The rioters look organised, which is an indication that there could have been underground plans to invade the buildings for some time.

400 arrests made, the governor removed

So far, more than 400 people have been arrested, and officials say there is no slowing down until the last perpetrator is arrested by the police. The announcement was made by Governor Ibanei Rocha of Brazil’s federal district.

“I come to inform you that more than 400 people have already been arrested and will pay for the crimes committed,” Ibanei Rocha, governor of the federal district, wrote. We continue working to identify all the others who participated in these terrorist acts this afternoon in the Federal District. We continue to work to restore order.”

One man answering tough questions about what happened in Brasilia is Mr Rocha, who announced the number of arrests made and visited the scenes of the attack. In a swift decision, the Supreme Court suspended him for three months as the incident only happened because of a “lack of security.”

Governor Ibanei Rocha is a close ally of former president Jair Bolsonaro and is also under investigation despite condemning the attack on Brazil’s major buildings. Before his removal from office, he had sacked Brasilia’s police chief for failing to prevent the attacks.

The situation is now under control

Ricardo Cappelli, the Federal District intervenor, said the security operatives are working hard to overcome the situation, but insisted that everything is “under control.”

He said: “In a few hours, we will restart operations. Everything will be duly investigated. Criminals will continue to be identified and punished.”

As of Monday morning, there was no major cause for worry, as the Presidential building, Parliament, and Supreme Court had been cleared of the supporters of the former president. Following the invasion, President Lula Da Silva flew back to Brasilia to supervise the situation and visit damaged buildings.

Brazil’s Supreme Court has ordered the removal of Bolsonaro’s camps in various Brasilia and other parts of the country.

“Absolutely nothing justifies the existence of full camps of terrorists, sponsored by various financiers and with the complacency of civil and military authorities in total subversion of necessary respect for the Federal Constitution,” the order reads.

Since Bolsonaro lost his re-election to former President Lula Da Silva, his supporters have erected temporary camps, and it is believed that Sunday’s riots could have been orchestrated from those places. The decision by the Supreme Court means supporters of the former president that are yet to accept the election’s result might face tough actions from the government in the coming days, weeks, and months.

Count me out, Bolsonaro says from abroad

Former President Jair Bolsonaro who is currently in the United States did not keep quiet regarding the attack. He condemned the attacks and insisted that the invasion and others that happened when Lula was president were unlawful.

“Peaceful demonstrations, in the form of the law, are part of democracy,” Bolsonaro wrote on Twitter. “However, depredations and invasions of public buildings as occurred today, as well as those practiced by the left in 2013 and 2017, escape the rule.”

Bolsonaro said he upheld the country’s Constitution throughout his time as President and defended democracy, transparency and Brazil’s freedom. He, however, distanced himself from all the accusations against him, saying they were not based on evidence.

“I repudiate the accusations, without evidence, attributed to me by the current head of the executive of Brazil,” Bolsonaro added.

In line with Bolsonaro’s statement, his party right-wing Liberal Party has also distanced itself from whatever happened on Sunday.

“Today is sad day for the Brazilian nation,” Valdemar Costa Neto, head of Jair Bolsonaro´s right-wing Liberal Party, said in a statement. “We cannot agree with the depredation of the National Congress. All ordered manifestations are legitimate.”

“Disorder has never been part of the principles of our nation. I want to say to you that we strongly condemn this type of attitude. And that the law must be fulfilled, strengthening our democracy,” the statement added.

What happened on Sunday has been described as a replay of the January 6 invasion of the capitol by supporters of Donald Trump. Others have called it a clear attempt to overthrow the democratically elected government of Brazil.

Vinicius Vieira, an associate professor of international relations at the Armando Alvares Penteado Foundation, told Aljazeera that it was an attempted Coup, and the foundation for whatever happened was laid by Bolsonaro.

“For sure this was a coup attempt on the part of Bolsonaro’s most radical supporters,” Vinicius Vieira said. “So that was totally articulated if not by Bolsonaro himself, it’s certainly a result, a consequence of his misbehaviour as president that did not really follow the constitutional rules.”

Although it was not clear if Bolsonaro was directly involved in Sunday’s riot, many have called for his investigation. President Lula Da Silva had insisted on holding the former leader accountable for his actions during his time as President, and Sunday’s riot could further strengthen that resolve.

“Deeply concerned about the news of rioting and vandalism against the State institutions in Brasilia,” Modi said in a Tweet Monday. “Democratic traditions must be respected by everyone. We extend our full support to the Brazilian authorities.”

“I condemn the assault on democracy and on the peaceful transfer of power in Brazil. Brazil’s democratic institutions have our full support and the will of the Brazilian people must not be undermined. I look forward to continuing to work with Lula,” President Biden wrote.

President Emmanuel Macron of France wrote: “The will of the Brazilian people and democratic institutions must be respected! The President Lula can count on the unconditional support of France.”

Other world leaders, including the secretary-general of the United Nations, have condemned the attack on Brazil’s government and promised to work with its leader when necessary.

So far, there has been no report of serious injuries or deaths in connection with Sunday’s attack.