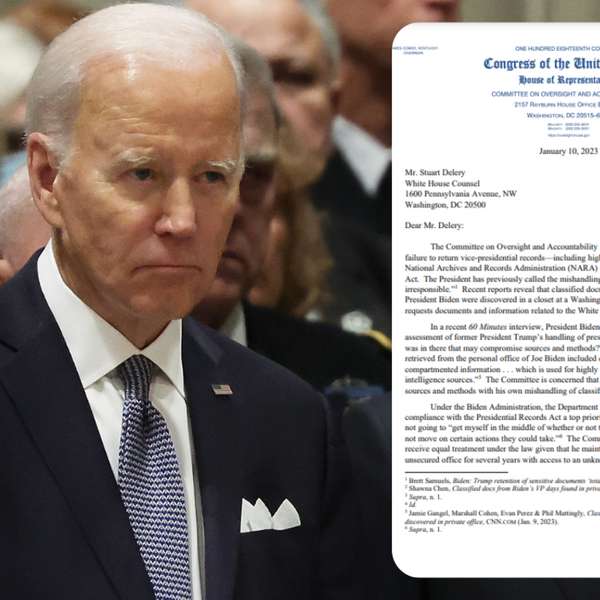 A second batch of classified documents had been discovered in the home of President Joe Biden of the United States. The files were found in the garage of his Wilmington home in Delaware, the White House confirmed.

“We have cooperated from the moment we informed the Archives that a small number of documents were found, and we will continue to cooperate,” Richard Sauber, a senior lawyer at the White House, said in a statement. He, however, insisted that the documents were “inadvertently misplaced” but not handled illegally.

On his part, President Joe Biden maintained that he takes classified documents seriously and insisted that the said files were in a safe location at the time of discovery.

“We’re going to see all of this unfold, I’m confident,” Biden stated at a press conference following the discovery of the items. When asked what he was thinking when he kept such important documents next to his Corvette, Mr Biden said: “My Corvette’s in a locked garage — so it’s not like it’s sitting out in the street.”

He stated that he hopes to get a chance to speak more on the issue “God willing soon.”However, the President and the White House said they are cooperating fully with the investigation by the Department of Justice, and they won’t say much for now.

A special counsel appointed to take over the investigation

On Thursday, Attorney General Merrick Garland announced the appointment of Robert Hur as the man to take charge of the investigation into the documents found in Biden’s home and former private office.

“I strongly believe that the normal processes of this department can handle all investigations with integrity. But under the regulations, the extraordinary circumstances here require the appointment of a special counsel for this matter,” Attorney General Merrick Garland said on Thursday.

Robert Hur served as a US attorney in Maryland from 2017 to 2021 when he resigned. He was nominated by former President Donald Trump. Since then, he has worked more as a private practitioner in Washington, DC.

Garland said it was necessary to appoint an independent investigator because of the sensitive nature of the case and the need for accountability. He added that the Department of Justice is “committed to independence,” and the new special counsel will have “all the resources he needs to conduct his work.”

On his part, Robert Hur, the man in charge of the investigation promised to be fair and impartial as he investigates the first citizen of America.

“I will conduct the assigned investigation with fair, impartial, and dispassionate judgment. I intend to follow the facts swiftly and thoroughly, without fear or favour, and will honour the trust placed in me to perform this service,” Hur said in a statement on Thursday.

The attorney general has the power to appoint a special counsel when there are extraordinary circumstances, or the public will see it as unfair for the Department of Justice to investigate the matter. A criminal investigation involving the President is one such case, as there is a need for the public to be convinced that there is fairness in the process.

Could Biden be charged?

President Biden cannot be charged with a criminal offence by a federal prosecutor until he gets out of the White House. What then happens if Mr Hur finds out that the President broke a law? Simply put, Biden could only face charges in 2025 should Biden lose the 2024 election or decides not to re-contest.

The Department of Justice’s policy prevents the indictment of a sitting president, hence unless an investigation lingers until after Biden’s presidency, he will not face criminal charges.

Republican Rep and chair of the House Oversight Committee, James Comer, said an investigation by the Hur will not prevent the House from conducting its own inquiry into Biden’s “mishandling of classified documents.”

“There are many questions about why the Biden Administration kept this matter a secret from the public, who had access to the office and the residence, and what information is contained in these classified documents. Republicans will push for transparency, accountability, and answers for the American people,” Comer said in a statement on Thursday.

The White House has been reluctant to speak on the documents as it claims to be cooperating with the investigation. However, there are allegations that the documents were planted in Biden’s former office and home by some Democrats. But there is no evidence to back up those claims, at least for now.