Like Trump, classified documents from Biden’s time as Vice-President found in his private office 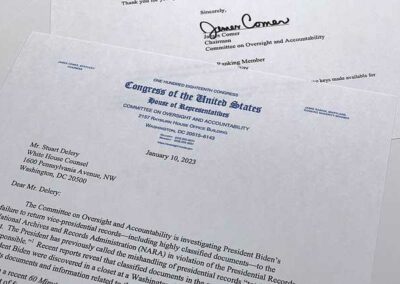 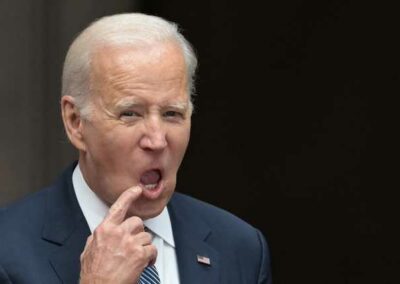 “The documents were discovered when the President’s personal attorneys were packing files housed in a locked closet to prepare to vacate office space at the Penn Biden Center in Washington, D.C.,” Richard Sauber, special counsel to Biden, said in a statement. “The President periodically used this space from mid-2017 until the start of the 2020 campaign. On the day of this discovery, November 2, 2022, the White House Counsel’s Office notified the National Archives. The Archives took possession of the materials the following morning.”

Although the Department of Justice is currently investigating the situation, preliminary findings reveal that at least ten documents were in Biden’s office, dating back to his days as Vice-President under Barack Obama. Information in the documents includes US intelligence memos and briefing materials on Ukraine, Iran and the UK.

President Biden, currently in Mexico City to see the leaders of Mexico and Canada, refused to answer questions about his handling of the documents on two occasions before finally saying he was unaware of such items in his office.

“I was surprised to learn there were any government records that were taken there to that office,” President Biden said when asked about his handling of the documents. He added that his team was fully cooperating with the review and that his attorney did the right thing by turning the records over.

The calls to raid Biden’s home

When classified documents were suspected to be in Trump Mara-Lago’s home, the FBI raided his home and found even more classified information. Republicans are arguing that there should not be a double standard in handling matters involving Trump and Biden. The first man to call for the raiding of the White House and Biden’s homes is Donald Trump, who is currently being investigated for keeping classified documents from his time as President.

“When is the FBI going to raid the many homes of Joe Biden, perhaps even the White House?” Trump wrote on Truth Social. “These documents were definitely not declassified.”

Like Trump, his son, Donald Trump Jr, has described the FBI’s handling of the documents involving the two men as a “double standard.” He wrote: “Biden kept classified documents from the Obama administration that he as VP would not have had the ability to declassify and I have yet to hear about the FBI Hostage Rescue Team raiding one of his homes?”

Others have doubted the credibility of the FBI and called on the dismantling of the body for not handling the case involving Biden the way it handled the one involving former President Trump.

“The FBI eagerly raided Trump’s home for a photo op over classified documents but have nothing to say about VP Biden doing the same thing,” Colling Rogg wrote on Twitter. “This is why I say the FBI needs to be dismantled.”

For others, the media tried to portray Trump as the worse American in history for keeping classified documents in his home. However, there has been very little attention given to Biden’s case, causing several people to question the fairness of the mainstream media.

Dan Eberhart, a political commentator, wrote: “Why exactly is the media suddenly so quiet over Joe Biden’s classified docs after throwing a fit over Donald Trump’s documents? Because one is a Democrat and one is a Republican.”

A crime with Trump, but not so bad with Biden

When similar records were found in Trump’s home, President Biden criticised him, saying: “How could that happen? How could anyone be that irresponsible?” Can Biden’s case be described as the same?

Supporters of Joe Biden had defended his possession of the said documents, arguing that it was different from the case of Donald Trump. According to them, the documents were handed to the national archives immediately, but Trump refused to cooperate with investigations. They also insist that Trump was in possession of over 300 of such documents, while Biden had less than a dozen.

“This is not the refusal of hundreds and hundreds of documents. There is no comparison. They were in a locked closet. They were not accessible. And that’s why the appropriate process was followed,” Democratic Rep. Sheila Jackson told Fox News.

However, supporters of Donald Trump had insisted that Biden should be charged with stealing the documents, as a Vice-President does not have the right to declassify documents.

“It appears Joe Biden illegally took classified documents from his time as Vice President, when he had no authority to declassify them,” Addison Smith, an American TV anchor, stated.

Rep Marjorie Taylor said: “Joe Biden took classified documents from the White House when he was Vice President. The VP does NOT have the power to declassify, only POTUS.”

Representative James R. Comer, who is in line to become the chairman of the House Oversight Committee, said on Monday that the House would investigate the discovery of the documents in Biden’s office.

The classified documents were discovered in Biden’s office six days before the mid-term elections. Republicans have argued that the elections would have gone their way should the disclosure have been made days before voting.

“Why didn’t the ‘Justice’ Department announce the Highly Classified documents found in the Biden Office before the election?” Mr Trump wrote on Truth Social.

Trump and his men accused Biden and the Justice department of keeping the information secret until after the election because they knew the election would not have gone the way of the Democratic party.

The White House has refused to comment on the issue, saying the investigation by the Department compels it not to comment, at least for now.

“This is an ongoing process under review by DOJ, so we are going to be limited in what we can say at this time. But we are committed to doing this the right way, and we will provide further details when and as appropriate,” Ian Sams, the spokesperson to the White House counsel, said on Tuesday.