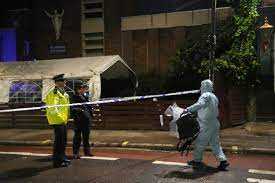 A seven-year-old girl was one of 6 people who received gunshot wounds in a shocking drive-by shooting at a London church on Saturday afternoon (14 January). The unnamed youngster received what have been described as “life-threatening” injuries, whilst in attendance at a memorial service at St Aloysius church, just a few hundred metres from one of the capital’s busiest train stations at Euston, in the north of the city.

Hundreds of mourners had gathered to pay their respects to Fresia Calderon and her daughter, Sara Sanchez, at around 1.30pm, both having sadly died at the end of last year, when shots were fired indiscriminately from a passing black Toyota.

Ms Sanchez suffered from leukaemia for three years before the disease finally took her life on November 30, shortly after her mother died suddenly from a pulmonary embolism, after arriving at Heathrow airport from Columbia, earlier in the month.

A 48-year-old woman also shot was said to have potentially “life-changing” injuries, whilst amongst the other four victims was another child, a 12-year-old, who is believed to have sustained a minor leg trauma. The others, all women, aged 54, 41 and 21, were not thought to be seriously injured, physically at least.

Air ambulances and police helicopters were on the scene and the immediate area remained sealed off as police continued with their enquiries. Early thoughts were that it may have been a targeted revenge attack aimed at a male guest at the service.

Superintendent Ed Wells, from the Metropolitan Police said that their thoughts were with all the victims, especially the youngest and most seriously hurt, together with the respective families. An investigation had begun straight away involving local officers and specialist detectives he confirmed.

He promised the community that his team would be doing everything possible to identify and bring to justice those responsible, and assured them that they could expect an increased visible presence in the area, as they progressed their enquiries.

Father Jeremy Trood, who conducted the service, said the mass, which had more than 300 people attending, had just finished when he heard a “very strange, long and prolonged noise”. He explained that doves were going to be released and everyone was going out to watch.

He remarked that many people were in a state of panic with lots of screaming and that there was much confusion. “I have been here nine years and I have never known anything like this, it is all very shocking.” He added that it was just so unthinkable that someone would shoot into any group of people, but people coming out of a memorial was unspeakably awful.

The London Ambulance Service clarified that they had treated all six shooting victims at the scene before rushing them to hospital,with three ambulance crews in attendance; plus five paramedics in fast response cars, an advanced paramedic and two incident response officers. The Air Ambulance was also dispatched.

Mayor and home secretary speak out

Mayor of London Sadiq Khan described the incident as “deeply distressing” and confirmed that he would remain in close contact with the Met Police to determine exactly what had occurred; whilst the Home Secretary Suella Braverman wrote on Twitter that she was: “deeply concerned” by the shocking shooting and said that her thoughts were with the injured and their families.

Eyewitnesses said that it was chaotic outside the church and many rushed for cover to escape the hail of bullets and hide wherever possible. Residents in the adjoining block to the church said there were lots of screams, but also made the point that it was not that unusual around that area.

They reported that a black car had pulled up, seemingly out of nowhere, and “started shooting”. It is not yet clear how the victims knew the mother and daughter, whose funerals they were attending.

Awful events behind the service

Ms Sanchez had heartbreakingly watched her mother collapse and die in front of her at Heathrow Airport, having just returned from Columbia, on a trip which was intended as a final goodbye for her, after a brave battle against leukaemia since being diagnosed at the age of seventeen.

She had said that the only reason she undertook an experimental cancer therapy was because she knew how hard it would be for her mother if she was to die. A family member said it was her mum that instilled hope that she would recover on days when she otherwise felt like giving up. “Sara gave up all hope for her future and lost the drive to fight cancer after the terrible loss of her mum.”

Not just Columbians at funeral

Regardless of the fact that the service was for two members of London’s Colombian community, a mourner said fellow guests were from an extensive variety of backgrounds, with “British Colombians” actually in a minority. Meaning that the investigation would not be able to be concentrated towards that angle and as a consequence, it could be a lengthy enquiry to find the perpetrators.

On Sunday afternoon (14 January) police shared a stock image of the Toyota model they are seeking which they believe to be a black Toyota C-HR, most probably a 2019 model, or similar. Superintendent Jack Rawlings said: “People came here to attend a funeral, to be with friends and loved ones and to mourn together; but instead they were the victims of a senseless act of violence.” He appealed for anyone with information on the “shocking incident” to contact the force urgently.