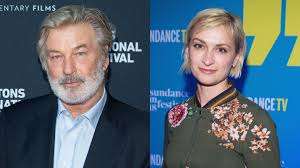 Hollywood actor Alec Baldwin is to be charged with involuntary manslaughter over the shooting of cinematographer Halyna Hutchins, on a film set near Sante Fe, New Mexico, back in October 2021. Mr Baldwin  had been rehearsing a scene for the Western film Rust, and was practising drawing a prop gun, when it went off hitting Ms Hutchins – who had been working as director of photography – in the chest, and despite being transferred by helicopter to hospital, she died shortly afterwards from her wound.

Film director Joel Souza was also wounded in the incident, but prosecutors said no charges would be filed in connection with that. Hannah Gutierrez Reed, the film’s armourer, will also face similar charges, although lawyers for both have stated that they intend to vigorously contest the accusations  in court.

The film’s assistant director David Halls has already entered a guilty plea to a misdemeanour charge of negligent in the use of a deadly weapon, and he will spend six months serving probation, prosecutors confirmed. Court submissions have shown that Mr Halls handed the gun to Mr Baldwin unaware that it contained a live round, and had indicated it was unloaded by shouting “cold gun!”

The film’s producers were fined more than $136,000 by the New Mexico Environment Department for failing to enforce safety protocol’s and strongly criticised by authorities for failing to follow safety guidelines.

Nobody above the law

Santa Fe’s District Attorney Mary Carmack-Altwies in announcing that the charges would be filed by the end of January, said that she had determined that there was sufficient evidence and quite sternly declared that: “On my watch, no one is above the law, and everyone deserves justice.”

Mr Baldwin, who was also one of the producers as well as the movie’s star, has repeatedly stated that he not only believed that the gun did not contain live rounds, but also that he did not pull the trigger, and it had “misfired”.

His lawyer, Luke Nikas, slammed the decision to bring charges, reiterating that his client had no reason to believe there was a live bullet in the gun, or anywhere on the movie set for that matter. “He relied on the professionals with whom he worked, so we will fight these charges, and we will win,” he declared confidently.

“Flawed” investigation should have identified failures

Ms Gutierrez Reed’s lawyer, Todd Bullion, was quick to stress how emotional and deeply sad about the tragic accident, his client was, but emphasised that it had been a “very flawed investigation and an inaccurate understanding of the full facts.”

He and his team were also keen to highlight that a report into events of that day had shown that she had not been provided with adequate time or resources to conduct her job effectively, despite, and he was at lengths to point out: “her voiced concerns”.

They maintained that the accident occurred when the firearm was used in an impromptu scene and as such, the production team had failed to call Ms Gutierrez Reed to perform an inspection. Had they done so “then this tragedy would have been prevented,” was their categorical assessment.

Incidents as serious as this one are extremely rare, because the use of firearms on set is subject to stringent safety standards. Actors handling guns should always receive adequate training, and one of the roles of the assistant director was to hold safety meetings on days when firearms were to be used.

According to documentation, such an assembly was conducted on the morning of the shooting. Rust Movie Productions, argued that it was not responsible for supervising the film set.

Prop guns need to be treated with upmost caution

“Prop guns are guns” was a very succinct tweet posted by TV writer David Slack. He continued to say: “Blanks have real gunpowder in them; so if you are ever on a set where prop guns are treated without proper caution and safe handling, you need to walk away.”

However, there does not appear to be one definitive set of procedures and protocols to follow, so policing it is something of a minefield, and seems to be somewhat haphazard.

Has this kind of incident happened before?

Brandon Lee, the actor son of martial arts legend Bruce Lee, died in 1993, aged just 28 and filming The Crow, when a prop gun with a dummy round loaded in it, was fired at him. Heartbreakingly, unaware of the tragedy unfolding in front of them, the cameras kept rolling. It was only when he did not get up at the end of the scene that it suddenly became obvious that something had gone horribly wrong.

Halyna Hutchins a star in the making

Ms Hutchins was from Ukraine, but grew up on a Soviet military base in the Arctic Circle. She had entered the film industry after gaining a degree in international journalism from Kyiv State University. In 2015 she graduated from the American Film Institute conservatory, and began working her way up in Hollywood.

She was described as “an incredible artist” by American Cinematographer magazine, who had named her as one of its rising stars in 2019, accompanied by a glowing endorsement of her work. Fellow cinematographer Catherine Goldschmidt called her “so talented” and expressed how tragic it was when considering just what lay ahead for her.