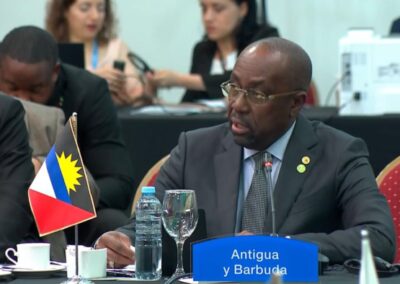 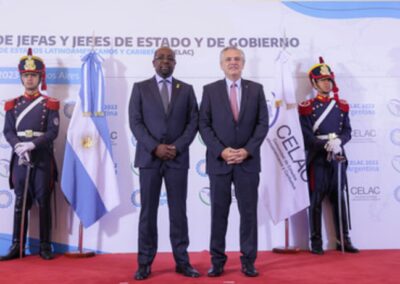 Foreign Affairs and Trade Minister E.P Chet Green has told heads of governments in Argentina, that Antigua and Barbuda remains firmly committed to the mandate of CELAC as a regional body to advance in the process of integration, promoting unity and the political, economic, social, and cultural diversity of our citizens.

Greene represented Antigua and Barbuda at the one-day Summit of the Community of Latin America and Caribbean Countries (CELAC) which ended in Buenos Aires, on Wednesday.

“Our region is a peaceful space in the western hemisphere free of nuclear weapons enshrined in the provisions of the Treaty for the Prohibition of nuclear weapons in Latin America and the Caribbean and its Protocols (Treaty of Tlatelolco). As a member of the United Nations Antigua and Barbuda supports Principles of the Charter and ‘International Laws’, that promote the peaceful settlement of disputes, and respect for Sovereignty,” Greene said.

He also noted that in today’s global political sphere, countries are witnessing many trouble spots and engagements that threatens the social and economic livelihoods of ordinary people and hence the need to constantly remind ourselves of the need to protect and safeguard the peaceful atmosphere of our region.

“Antigua and Barbuda is pleased to participate in this Summit of Heads of State and Government of the Community of Latin American and Caribbean States (CELAC), and which to congratulate Argentina work done in addressing the priorities of our region as struggle to deal with the many challenges brought on by Climate Change, global financial architecture, rising food prices and ongoing global political and military tensions,” he added.

For the past two years held the Chairmanship of the Alliance of Small Island States (AOSIS) and Greene stated that as a body of 39 Small Island and low-lying coastal developing states the twin island state has been advocating for climate and economic justice and fair approaches to our sustainable development and resilience building.

“A reduction in emissions today can prevent future economic and environmental losses for present and future generations, especially for SIDS who are threatened by rising sea levels and the inundation of coastal areas. As we work together, Antigua and Barbuda requests continued solidarity, and high-level advocacy for the sustainable development of Small Island Developing States (SIDS),” he said.

Antigua and Barbuda he said, laud the efforts by the CELAC member states to encourage collaboration in science, technology, and innovation, as evidenced by the vital cooperation in healthcare, as well as the signing of the Convention establishing the Latin American and Caribbean Space Agency (ALCE).

“We are also eager to strengthen the regional disaster risk response to enhance resilience to natural and man-made hazards, and protect lives, property, and livelihoods,” he added.

Access to concessional financing remains critical to creating new pathways, especially within the context of COVID-19 and climate change mitigation, where the rescheduling of debt payments and debt forgiveness has become an even greater necessity for survival, Green told those gathered at the meeting

Adding, that the promotion and development of a Multidimensional Vulnerability Index by International Financial Institutions is crucial, as Antigua and Barbuda and other countries continue to strive for the achievement of the Sustainable Development Goals (SDGs).

He also spoke about the issue of ‘de-risking,’ where foreign banks have been scaling back on activities in our jurisdictions, despite comprehensive compliance efforts further exacerbating our financial challenges.

Meanwhile, Greene said Antigua and Barbuda support the legitimate rights of the Argentine Republic in its sovereignty dispute over the Malvinas, South Georgia and South Sandwich Islands and the surrounding maritime spaces and encourages continued dialogue towards a final and peaceful solution to this dispute, in accordance with the provisions of the Resolution 31/49 of the General Assembly of the United Nations.

“Antigua and Barbuda continues to advocate the need for ‘Reparatory Justice’ to establish moral, ethical and legal cases for the payment of reparations by governments of former colonial power and relevant institutions of those to the nations and people of the Caribbean Community for the crime against Humanity of Native Genocide, the Trans-Atlantic Slave Trade and a racial system of chattel Slavery,” he said.

It is against this background that Greene endorsed the Regional Launch of the International Decade of Indigenous Languages 2022-2032, designed to carry on efforts to continue working for the promotion and protection of the rights of indigenous peoples in Latin America and the Caribbean.

“It is important that we continue to coordinate efforts regionally and extra-regionally to manage the socioeconomic fall-out from the pandemic to build a Latin American and Caribbean region that is more secure, more resilient, and more sustainable,” he said.

Greene was recently appointed, Agriculture minister as well and he said the Gaston Browne administration will remain deeply committed to the efforts made within CELAC to address the issues of food security.

“I am of the view that it should be treated as a national security issue given the fact that global supply chains are fragile and are subject to commercial or transportation disruptions.  Many of our countries in the region, such as Antigua and Barbuda, are net importers of food products, which exposes us to a high level of risk and vulnerability,” he said.

“Likewise, as we all seek to bolster our national food supply at home, we must seek to strengthen supply chain resilience through greater intraregional trade. Regional mechanisms such as ALBA, CELAC and CARICOM could provide a regional governance space for coordination in the fight against the scourge of hunger and end all forms of malnutrition by 2030”.

Greene also added that agricultural development will help to generate broad-based growth through the creation of jobs, the fostering of youth empowerment, and the reduction of inequalities.