Ukraine and Russia: What you need to know right now


(Reuters) – Ukraine rejects Russian calls to surrender the port city of Mariupol, where residents are besieged with little food, water and power in a humanitarian crisis that is increasing pressure on European leaders to toughen sanctions on Moscow.

* Russian forces advancing on Kyiv from the northeast have stalled and the bulk of its forces remain more than 25 km (16 miles) from the centre of the city, British military intelligence said.

* Ukrainian Deputy Prime Minister Vereshchuk said more than 7,000 people were evacuated from cities through humanitarian corridors on Sunday, more than half from Mariupol. She said the government planned to send nearly 50 buses there on Monday for more evacuations.

* At least 902 civilians have been killed and 1,459 wounded in Ukraine as of midnight on March 19, the U.N. human rights office said.

* Ten million people have been displaced, including nearly 3.4 million who have fled the country, the U.N. refugee agency said.

* EU foreign ministers meet on Monday. U.S. President Joe Biden arrives in Brussels Thursday for summits with NATO’s 30 members, as well as the EU and in a Group of Seven (G7) format including Japan.

* “The violent aggression against Ukraine is unfortunately not slowing down,” Pope Francis said. “It is a senseless massacre where every day slaughters and atrocities are being repeated.”

* “Kyiv calling to the whole world … Come out of neutrality, you boys and girls,” some of the lyrics from Ukrainian punk band Beton’s reworking of the Clash’s famous “London Calling”. 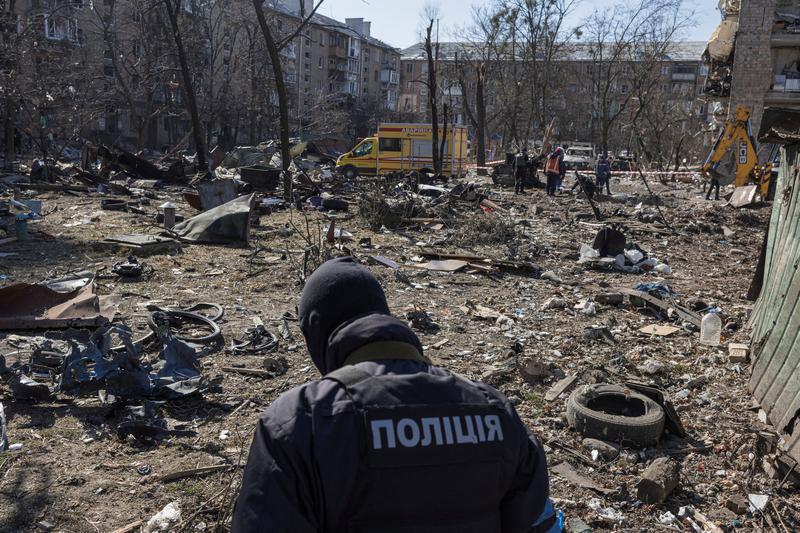 A Ukrainian policeman secures the area at a residential district that was damaged by shelling, as Russia’s invasion of Ukraine continues, in Kyiv, Ukraine, March 18, 2022. REUTERS/Marko Djurica