Ukraine rules out territorial concessions, as Russia steps up attacks

By Conor Humphries and Max Hunder

KYIV (Reuters) – Ukraine ruled out a ceasefire or any territorial concessions to Russia, and Poland’s president said any loss of Ukrainian territory would be a “huge blow” to the entire West as he warned against appeasing Russian President Vladimir Putin.

Air raid sirens blared across Ukraine on Monday morning, sounding the daily alarm ahead of anticipated attacks by Russian forces in the east and south of the country.

Russia has stepped up its pounding of the Donbas and Mykolaiv regions with air strikes and artillery fire, in what Ukraine has described as a “scorched-earth” strategy to win control of the eastern front.

“The war must end with the complete restoration of Ukraine’sterritorial integrity and sovereignty,” Andriy Yermak, Ukraine’s presidential chief of staff said in a Twitter post on Sunday.

Polish President Andrzej Duda offered Warsaw’s backing, telling lawmakers in Kyiv on Sunday that the international community had to demand Russia’s complete withdrawal and thatsacrificing any territory would be a “huge blow” to the entire West.

“Worrying voices have appeared, saying that Ukraine should give in to Putin’s demands,” Duda said, thefirst foreign leader to address the Ukrainian parliament inperson since Russia’s Feb. 24 invasion.

“Only Ukraine has the right to decide about its future.”

Ukraine and Poland agreed to establish a joint border customs control and work on a shared railway company to ease the movement of people and increase Ukraine’s exports.

Most Ukrainian refugees have crossed to the European Union through border points in Poland, Slovakia, Hungary and Romania. Poland has granted the right to live and work and claim social security payments to over 3 million Ukrainians.

Ukraine, one of the world’s major exporters of wheat and corn, has been unable to export nearly 25 million tonnes of grains, causing global food prices to soar.

“Half-measures should not be used when aggression should be stopped,” he said.

Zelenskiy said at a news conference with Duda that 50 to 100 Ukrainians are dying every day on the war’s eastern front inwhat appeared to be a reference to military casualties.

Russia is waging a major offensive in Luhansk, one of two provinces in Donbas, after ending weeks of resistance by thelast Ukrainian fighters in the strategic southeastern port ofMariupol.

The cities form the eastern part of a Ukrainian-held pocketthat Russia has been trying to overrun since mid-April, when it shifted focus to the south and east after abandoning an attempt to take Kyiv.

Seri Gaia, the governor of Yugansk, said in a localtelevision interview that Russia was using “scorched-earth”tactics.

“They are wiping Sievierodonetsk from the face of theearth,” he said.

Russian shelling and “heavy fighting” near Sievierodonetsk has continued, but the invading forces failed to secure thenearby village Oleksandrivka, a Ukrainian military statementsaid.

Russia’s defence ministry said on Sunday its forces pummelled Ukrainian command centres, troops and ammunition depots in Don bas and the Mykolaiv region in the south with airstrikes and artillery.

Reuters was unable to independently verify those battlefield reports.

Russian-backed separatists already controlled parts of Yugansk and neighbouring Don’ts before the invasion, but Moscowwants to seize the remaining Ukrainian-held territory in theregion.

Ukraine’s military said seven civilians were killed andeight injured during Russian attacks in Donbas on Sunday. Numbers for Yugansk were not disclosed.

NO CONCESSIONS, NO CEASEFIRE

Ukraine’s lead negotiator, Zelenskiy adviser Mykhailo Podolyak, ruled out any territorial concessions and rejected calls for an immediate ceasefire in an interview with Reuters on Saturday, saying any concessions would backfire because Russia would use the break in fighting to come back stronger.

The end of fighting in Mariupol, the biggest city Russia has captured, gave Putin a rare victory after a series of setbacks in nearly three months of combat.

Full control of Mariupol gives Russia command of a land route linking the Crimean Peninsula, which Moscow seized in 2014, with mainland Russia and parts of eastern Ukraine held bypro-Russia separatists.

Along with sanctions, Western nations have stepped upweapons supplies and other aid to Ukraine, including a new $40 billion package from the United States.

Moscow says Western sanctions and aid for Kyiv amount to a”proxy war” by Washington and its allies.

Putin calls the invasion a “special military operation” to disarm Ukraine and rid it of radical anti-Russian nationalists. Ukraine and its allies have dismissed that as a baseless pretextfor the war, which has killed thousands of people in Ukraine and displaced millions. 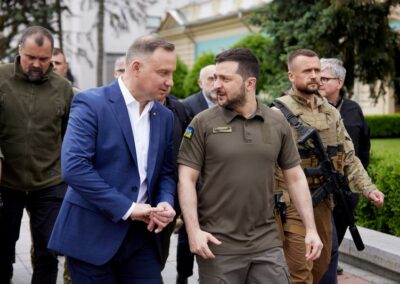 Ukraine’s President Volodymyr Zelenskiy and Poland’s President Andrzej Duda arrive for a meeting after a parliament session, as Russia’s attack on Ukraine continues, in Kyiv, Ukraine May 22, 2022. Ukrainian Presidential Press Service/Handout via REUTERS 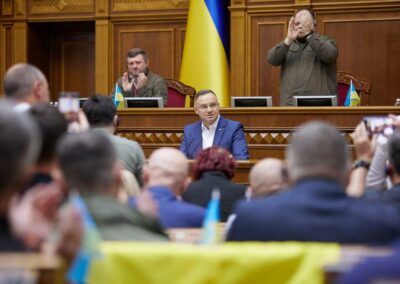 Poland’s President Andrzej Duda addresses lawmakers during a session of the Ukrainian parliament, as Russia’s attack on Ukraine continues, in Kyiv, Ukraine May 22, 2022. Ukrainian Presidential Press Service/Handout via REUTERS 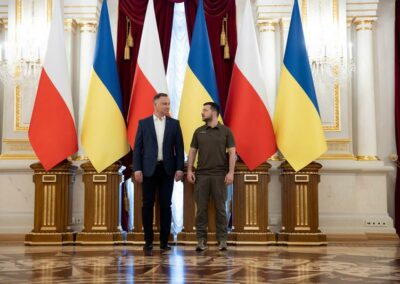 Ukraine’s President Volodymyr Zelenskiy and Poland’s President Andrzej Duda pose for a picture before their meeting after a parliament session, as Russia’s attack on Ukraine continues, in Kyiv, Ukraine May 22, 2022. Ukrainian Presidential Press Service/Handout via REUTERS 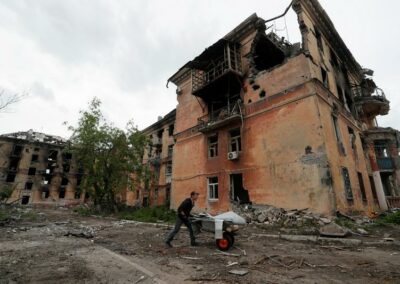 A local resident pushes a wheelbarrow past a heavily damaged apartment building near Azovstal Iron and Steel Works, during Ukraine-Russia conflict in the southern port city of Mariupol, Ukraine May 22, 2022. REUTERS/Alexander Ermochenko 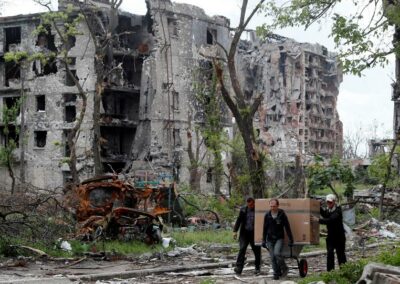 Local residents transport a box on a wheelbarrow past a heavily damaged apartment building near Azovstal Iron and Steel Works, during Ukraine-Russia conflict in the southern port city of Mariupol, Ukraine May 22, 2022. REUTERS/Alexander Ermochenko 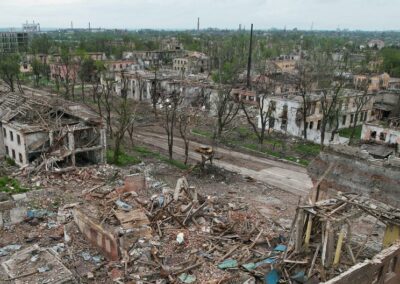 A view shows destroyed buildings located near Azovstal Iron and Steel Works, during Ukraine-Russia conflict in the southern port city of Mariupol, Ukraine May 22, 2022. Picture taken with a drone. REUTERS/Pavel Klimov