President Biden visits Asia as he warns China over Taiwan

President Joe Biden has visited Asia for the first time as President of the United States. He arrived in the Asian country of South Korea on Friday, and he is expected to spend five days on the continent. President Biden’s visit to the continent is not unconnected to the growing influence of China in the region and the unending threats coming from North Korea.

Defense / Military Discussions
South Korea was the first destination of the U.S. President. Defense against North Korea’s nuclear threats was top of the agenda for the leaders of both countries. South Korean president Yoon Seok-Youl, who has been in power for less than two weeks, had promised to strengthen ties with the U.S. to ensure the country’s security during his campaign. Both leaders have now agreed to expand their military presence in the Korean peninsula. This means that more ships, planes, and other military equipment will be deployed to the area.

Part of the joint statement released by both leaders after extensive discussions read; “The two presidents share the view that DPRK [North Korea’s] nuclear program presents a grave threat not only to peace and stability on the Korean peninsula but also to the rest of Asia and the world.” The statement also stressed that; “Both leaders condemn DPRK [North Korea’s] escalatory ballistic missile tests this year.”

The statement also highlighted plans to strengthen the military exercise in the region, which has relatively weakened in the past few years because of efforts by previous governments to denuclearize North Korea diplomatically. This is coming after the sudden rise in missile testing by the Kim Jong-un government.

During Biden’s visit to Seoul, he also stopped at the Osan Airbase where troops of both countries are monitoring potential nuclear threats from North Korea. There were speculations that Pyongyang was planning missile tests during Biden’s South Korea visit. At the Osan Airbase, Biden said he was prepared for any North Korean threat. Before leaving the military base, President Biden had ice cream with the troops and even took selfies with them.

ECONOMIC IMPACTS OF THE VISIT

Biden’s visit to South Korea will be incomplete without mentioning the economic benefits of the visit. The news of Hyundai’s plan to build a plant in Georgia has been on the air for some time. That was further confirmed during Biden’s visit. In addition to the $5.5 billion Plant, the company pledged to invest an additional $5 billion in the country. The South Korean company is expected to invest a total of about $10 billion in the United States until 2025.

President Joe Biden crossed into Japan on Sunday in continuation of his 5-day visit to the Asian continent. He met with Japan’s President Fumio Kishida to discuss how the military capabilities of the country can be strengthened. Biden assured his Japanese counterpart that the United States will work with Japan to ensure the country’s security.

China was not left out of the discussion. Biden took a swipe at China when he said; “what you’re going to see more of is this is going to be competition between democracies and autocracies.” The United States could be trying to limit China’s influence in the region by forming stronger relationships with its allies that are China’s neighbors. Also discussed during the meeting of both leaders was the tension between China and Taiwan.

President Biden stressed that “China is flirting with danger” over its plan takeover of Taiwan. When asked if the United States will intervene militarily if China invades Taiwan, the U.S. president responded with a “yes.” He said, “It is a commitment we have made” and he added that he hopes the invasion “doesn’t happen.”
The Japanese President also said the country will work together with the U.S. on China-related issues, and the relationship between both countries will be stronger, especially at a time like this.

Before leaving for the United States, President Biden will hold a meeting with QUAD leaders. These include leaders of Australia, India, and Japan. Key issues to be discussed at the meeting include Russia’s invasion of Ukraine and the need to unite against China. Indian Prime Minister Narendra Modi is already in Japan for the summit. This is also expected to be the first official foreign assignment for the new Australian Prime Minister, Anthony Albanese.

President Biden is expected to return to the United States on Tuesday after five days in Asia. At the end of the visit, it is expected that the cooperation between the countries will improve tremendously. On the other hand, the exclusion of China from such an important visit might cause more division in the already divided Asian continent. Could it be that the United States is trying to buy countries over to its side rather than uniting countries with differences? No one knows for now but what we know is that Biden’s visit to Asia is not in the interest of China, North Korea, and Russia 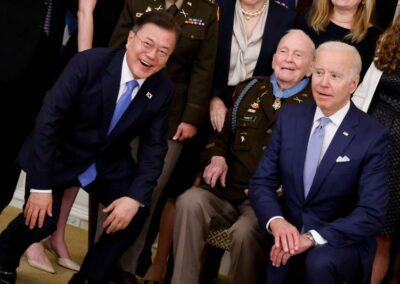 U.S. President Joe Biden and South Korea’s President Moon Jae-in pose for a picture with Korean War-era Army Colonel Ralph Puckett during a Medal of Honor ceremony in the East Room at the White House, in Washington, U.S. May 21, 2021. REUTERS/Jonathan Ernst 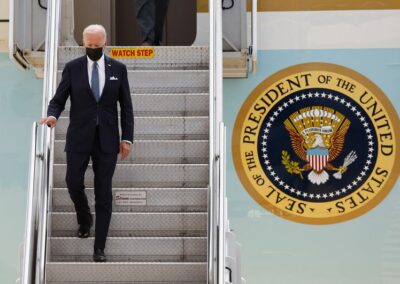