One continent that has been slow in condemning the ongoing war in Ukraine is Africa. Although South Africa has openly blamed the West for the war in Ukraine, it is not clear if that is the stand of the entire continent. However, the recent visit of the head of the African Union to the Kremlin suggests that the continent might be on Putin’s side.

On Friday, the President of Senegal, Macky Sall, who doubles as the head of the African Union, paid a scheduled visit to President Putin of Russia. The purpose of the visit was to discuss how the war in Ukraine is partly responsible for the food crisis in Africa.

The leader of the African Union told President Putin that although Africa is not directly involved in the war, it is suffering from it.

“Our countries, even if they are far from the theatre (of war), are victims on an economic level,” Macky Sall told Putin. What is the food situation in Africa?

THE FOOD CRISIS IN AFRICA

There is no doubt that the food crisis in Africa needs urgent attention. According to the UN, Africa depends on Russia and Ukraine for almost half of its wheat. Sadly, in the past few months, the price of wheat has gone up by about 45%. It has further increased the suffering of Africans, who are already battling several economic challenges.

The eastern part of Africa faces a severe drought that has affected agricultural production. The United Nations has said millions of Africans are already facing a pang of unprecedented hunger, and the figure is on the increase.

Apart from wheat, Africa also depends on the warring countries for most of its fertilizers. A lack of fertilizers combined with the drought ravaging the eastern part of Africa might cause the continent to face one of the worse famines in its history. The crisis has already started. How worse it will get depends on how it is dealt with now.

THE BENEFIT OF THE VISIT TO RUSSIA

The Kremlin will not entertain any visit that will not be of mutual benefit. What then does Russia stand to gain from the visit of the AU leader?

Russia needs allies more than every other country at the moment. After the country invaded Ukraine, the West imposed sanctions on Russia. These sanctions have caused the nation to be one of the most isolated in the world. This visit has shown that some countries are ready to be on Russia’s side as long as they get what they want from it.

OUTCOME OF THE MEETING

During the meeting, President Putin blamed the blockage of food imports to Africa on Western sanctions.

“We are now seeing attempts to shift the responsibility for what is happening on the world food market, the emerging problems in this market, onto Russia. This is an attempt, as our people say, to shift these problems from a sick head to a healthy one,” Putin said during the meeting.

The Russian president also said that if the sanctions imposed on Belarus are relieved, it will be easy for Ukraine to export grains to various parts of the world.

“If someone wants to solve the problem of exporting Ukrainian grain…, the easiest way is through Belarus. No one is stopping it. But for this, you have to lift sanctions from Belarus,” Putin also said.

The Senegalese President seems to agree with the Russian president. He said, “despite enormous pressure, the majority of African countries have avoided condemning Russia in this situation.”

The AU chief also said African countries “no longer have access to grain from Russia and especially fertilizer.” He added that the situation “creates serious threats to the food security of the continent.”

At the end of the meeting, Macky Sall said President Putin has promised to facilitate wheat exports to Africa. “President Putin expressed to us his readiness to facilitate Ukrainian wheat exports. Russia is ready to ensure the export of its wheat and fertilizers. I call on all partners to lift sanctions targeting wheat and fertilizer,” he tweeted.

Among the first to react to the meeting between both leaders was the spokesperson of the German foreign ministry. She said the west was not responsible for the food crisis in the world, but Russia was responsible.

According to Andrea Sasse, the food crisis that is currently ravaging the world is “a result of the Russian war and not the result of Western sanctions.”

While the most powerful nations in the world are concerned about who is responsible for the food crisis, the African continent is more concerned with how it can feed itself.

Read also, Is Russia using food as a weapon? 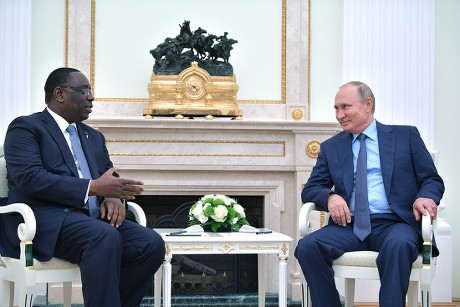