The death toll was estimated to be around 50, but government officials have confirmed that about 40 persons died during the shootings.

“We have just 22 (bodies) in this hall. A few of them have been buried because the relatives couldn’t wait till today. But as at the last count, these animals came to the church and murdered 40 people,” the governor of Ondo State, Rotimi Akerodolu, said during the mass burial.

In a funeral service conducted by the Catholic Church and the Ondo State government, a combined mass was held for 22 of the 40 victims before their families buried them separately.

During the funeral, the governor addressed the families, friends of the victims, and residents of the State who attended the sad event. In an emotional outburst, Mr. Akerodolu said he and the government failed the people.

He added that it is only God that can console the families of friends of those who lost loved ones in the attack. He promised to discuss the security challenges on the appropriate platform as the funeral was not the best place to talk about it.

In reply to the governor, Most Rev. Jude Ayodeji Arogundande, the presiding Priest said the Governor did not fail in any way.

“No. You did not fail. You are a strong soldier. Your determination to protect those who voted you to power is unquestionable. This was done by cowards. You do not have to feel guilty at all,” the clergy said.

Although the State Governor is in the same political party as the President, he has criticized the government’s handling of the security situation. His State has also passed a law to criminalize open grazing, a controversial issue in the entire country. In the past, there were clashes between the herders and farmers. The attitude of the Governor toward the activities of herders in the state is responsible for the crises.  Some experts have suggested that the attack on the Church was another message from the herders to the governor.

The priest also used the opportunity to express his disappointment with the government for not granting State police. “What does it take for every state to have state police to be able to prevent this? Why do we have to kneel to beg anybody for State Police?” The priest asked.

Although Nigeria operates a federal government, there is a center policing system, and it is understaffed. Unfortunately, a policeman died in the massacre. Many Nigerians believe that if all the 36 States had independent policing, such attacks might reduce significantly.

The Catholic Priest even went as far as calling what happened genocide. “If this is not genocide, I don’t know what genocide is,” he said.  He added that the government does not match its talks with words.

Government investigations revealed that the Islamic State in West African Province, ISWAP was responsible for the attack. The Ondo State government and top officials from the region have countered that claim because ISWAP is known for claiming responsibility for its attacks.

The government in Nigeria has faced a lot of criticism lately for its inability to tackle the insecurity challenges of the country.  Various groups and organizations in the country have accused the federal government of shielding criminal gangs, especially those of the Fulani tribe, the tribe of the President.

Over 70 victims are still in various hospitals, while a few have been discharged from hospitals.

So far, no arrest has been made in connection to the church massacre, and no one is even aware of the reason for the attack. 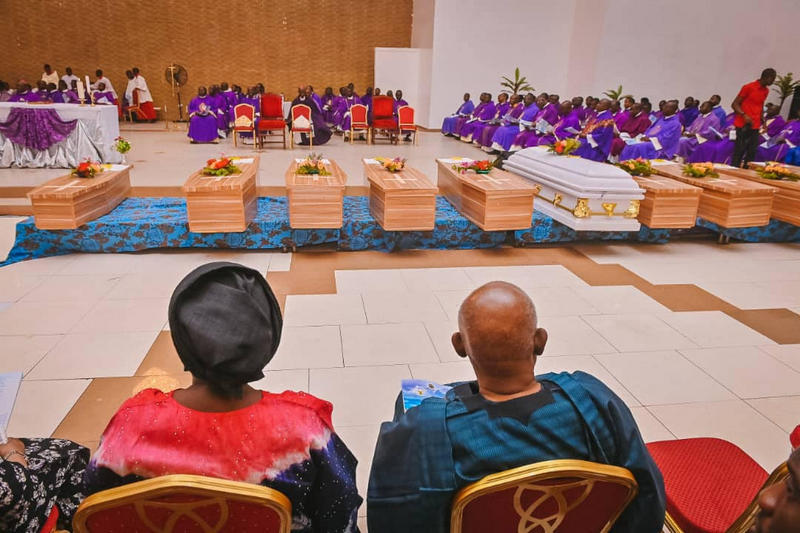