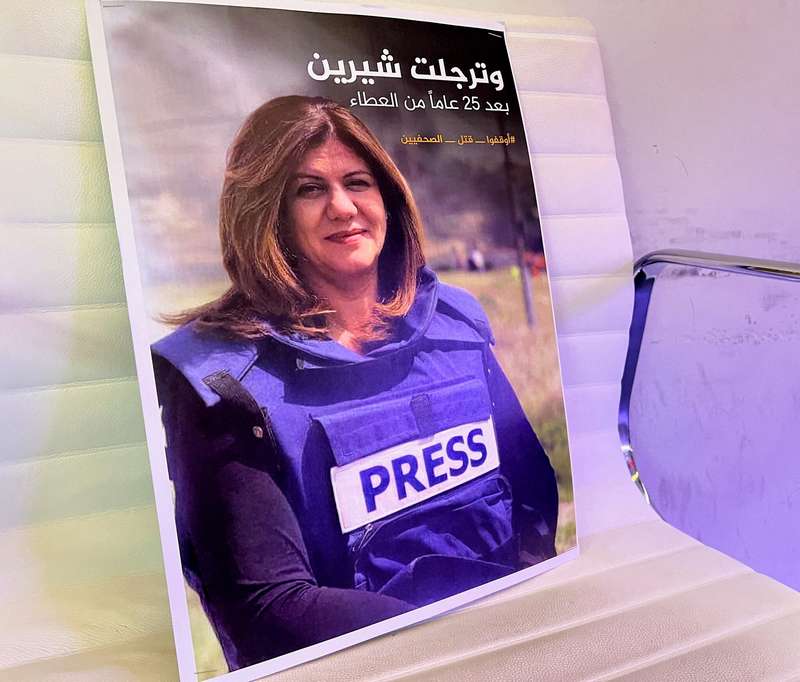 A picture of Al Jazeera reporter Shireen Abu Akleh, who was killed by Israeli army gunfire during an Israeli raid, according to the Qatar-based news channel, is displayed in Al-Jazeera headquarter building in Doha, Qatar, May 11, 2022. Israeli military said Abu Akleh may have been shot by Palestinians as they clashed with its troops. REUTERS/Imad Creidi

The United States on Monday concluded its investigation on the murdered Aljazeera journalist Shireen Abu Akleh. The result of the investigation suggested that the Israeli Defense Force could be responsible for the death of the journalist.

While the United States Security Coordinator suggested that the Israeli Defense Force was responsible for the death of the journalist, it refrained from accusing the Israeli military of the murder.

“After an extremely detailed forensic analysis, independent, third-party examiners, as part of a process overseen by the U.S. Security Coordinator (USSC), could not reach a definitive conclusion regarding the origin of the bullet that killed Palestinian-American journalist Shireen Abu Akleh,” the State Department said in the statement on Monday.

The statement went on to say that the bullet was too damaged to be studied.

“Ballistic experts determined the bullet was badly damaged, which prevented a clear conclusion,” the statement added.

The U.S Security Coordinator said it studied the results of previous investigations conducted by the Israel and Palestinian governments. “In addition to the forensic and ballistic analysis, the USSC was granted full access to both Israel Defense Forces (IDF) and Palestinian Authority (PA) investigations over the last several weeks,” the Department’s spokesperson Ned Price said.

In summarizing both investigations, “the USSC concluded that gunfire from IDF positions was likely responsible for the death of Shireen Abu Akleh.”

However, according to Ned Price, the investigation could not tell if the journalist was deliberately murdered by the Israeli Defense Force.

“The USSC found no reason to believe that this was intentional but rather the result of tragic circumstances during an IDF-led military operation against factions of Palestinian Islamic Jihad on May 11, 2022, in Jenin, which followed a series of terrorist attacks in Israel,” the statement concluded.

The United States offered “condolences to the Abu Akleh family” and promised to engage the Israeli and Palestinian governments in further investigations.

PALESTINE DISAGREES WITH THE U.S

Reacting to the statement by the United States, the Palestinian Authority has described the outcome of the investigation as incorrect and that Abu Akleh was deliberately targeted.

“The American statement that they found no reasons to indicate the targeting was deliberate is unacceptable,” Palestinian general prosecutor Akram al-Khatib said. “The Palestinians would continue to pursue legal action against Israel at the International Criminal Court.”

The spokesman of the Palestinian President, Nabil Abu Rudeineh, also reacted to the report. He said: “Israel was responsible for killing her, and it has to be held accountable.”

The family of the slain journalist also reacted to the outcome of the investigation, saying the Israeli military was responsible for Shireen’s death. They said the Israeli forces consider all Palestinians as legitimate targets, and the journalist was no exception.

“The truth is that the Israeli military killed Shireen according to policies that view all Palestinians – civilian, press or otherwise – as legitimate targets,” her family said in the statement.

However, Israeli Defense Minister Benny Gantz said the Israeli forces responded to heavy gunshots from the city, which is home to many refugees. He said the Palestinians were responsible for the murder because they operated from a highly-populated area.

“The first to bear responsibility in such events are the terrorists who operate from within population centers,” he said in a statement.

OUTCOME THE OF U.N INVESTIGATION

“All information we have gathered … is consistent with the finding that the shots that killed Abu Akleh and injured her colleague Ali Sammoudi came from Israeli security forces and not from indiscriminate firing by armed Palestinians,” Ravina Shamdasani, the spokesperson of the UN Human Rights Office told reporters.

“Several single, seemingly well-aimed bullets were fired towards them from the direction of the Israeli security forces,” Ravina added.

The U.N Human Rights Office added that the Israeli forces also shot at the young man who came to Shireen’s aid after she was shot.

The U.N urged the Israeli government to open criminal investigations on the murder of the American-Palestinian journalist.