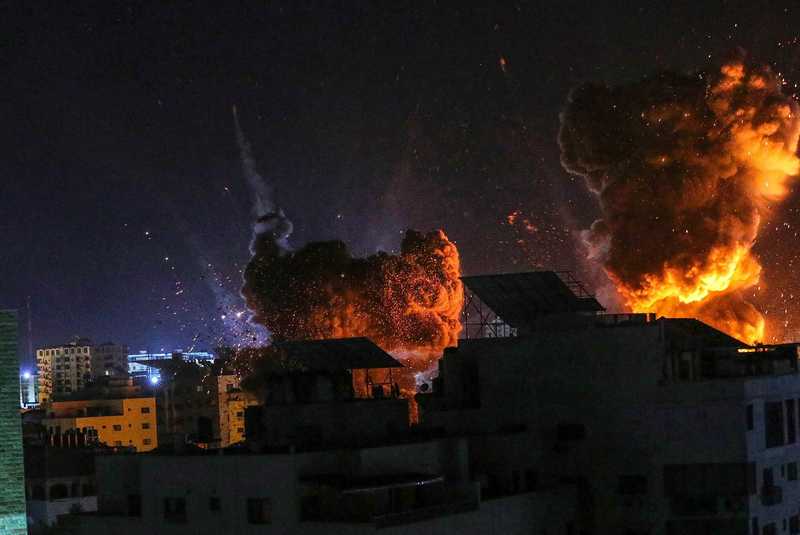 It is night in Gaza. Suddenly everywhere lights up. Electricity is not the source of this light. It is another explosion that has visited the city from Israel. That has been the situation in Gaza in the last 24 hours. In a military operation that started on Friday, Israeli forces fired multiple airstrikes into Gaza, killing eleven people and injuring many others. The Israeli government said the strikes would continue and that Islamic Jihadists were the targets.

“At this time, the IDF will continue to target legitimate terrorist targets belonging to the Islamic Jihad terrorist organization in the Gaza Strip,” the military said on Friday.

Islamic Jihad confirmed that one of its top commanders was killed in the airstrikes on Friday. Authorities also confirmed that among those killed was five-year-old Alaa Qaddoum, who accompanied her father to shop for groceries on a motorcycle.

“Her mother Rasha is in great shock. She lost her daughter and her husband in a blink of an eye and left behind three children. We are all shocked. What is the fault of an innocent five-year-old girl to be killed in this way?” family member Mohammad Abu Jabal told Al Jazeera.

The Palestinian ministry of health said at least 11 people died during the airstrikes, and 75 others were injured. The Israeli government has not denied casualties but insisted that only militants were killed by its airstrikes.

Prime Minister Yair Lapid said the special operation was to ensure the safety of Israelis living around the Gaza strip.

“The goal of this operation is the elimination of a concrete threat against the citizens of Israel and the civilians living adjacent to the Gaza Strip, as well as the targeting of terrorists and their sponsors,” The Prime Minister said in a joint statement with Defense Minister Benny Gantz.

“The Israeli government will not allow terrorist organizations in the Gaza Strip to set the agenda in the area adjacent to the Gaza Strip and threaten the citizens of the State of Israel. Anyone who tries to harm Israel should know: We will find you,” the statement added.

“Islamic Jihad is an Iranian proxy that wants to destroy the State of Israel and kill innocent Israelis. The head of Islamic Jihad is in Tehran as we speak. We will do whatever it takes to defend our people. Israel isn’t interested in a broader conflict in Gaza but will not shy away from one either,” said in another broadcast.

The Islamic Jihad has vowed to retaliate against the actions of the Israeli military. Daoud Shehab, the spokesperson of the Jihadist group, said the group will “respond with all force.

“The enemy has begun a war targeting our people, and we all have the duty to defend ourselves and our people, and not allow the enemy to get away with its actions, which are aimed at undermining the resistance and national steadfastness,” the Islamic Jihad said in a statement.

The leader of Islamic Jihad told Aljazeera that all the options were on the table. Shehab did not rule out the possibility of a full-blown war.

“The Israeli occupation bears full responsibility for its most recent escalation in the Gaza Strip,” a statement released by Hamas said. “In a phone call with senior Egyptian intelligence officials, Haniyeh reaffirmed the necessity for the ongoing Israeli bombardment in the besieged Gaza Strip to be immediately stopped.”

According to the Israeli army, militants in Palestine have fired 193 rockets toward Israel. The IDF said 36 of those landed in Gaza, and the rest were either intercepted or landed in open fields.

The army said it would continue to bomb weapons production facilities in Gaza, especially the rocket launching site in the city of Khan Younis.

While some countries are condemning the airstrikes in their totality, others like the United States, think Israel is only trying to defend itself. Still, other countries have begun playing the role of a mediator.

An official of the UN in the middle east, Tor Wennesland, called on both sides to avoid further escalations. He said: “In the past few hours, at least 10 Palestinians were killed by Israeli air strikes. I am deeply saddened by reports that a five-year-old child has been killed in these strikes. There can be no justification for any attacks against civilians.”

Wennesland said the UN would play its role in preventing further deterioration. He added, “the responsibility is with the parties to avoid this from happening.”

However, the United States has subtly defended its ally, Israel, saying it has the right to defend itself against its enemies.

“We remain unwavering in our commitment to Israel’s security, and we will continue to work to strengthen all aspects of the US-Israeli partnership,” John Kirby, US National Security Council coordinator for strategic communications said.

“We absolutely fully support Israel’s right to defend itself against terrorist groups that are taking the lives of innocent civilians in Israel,” John Kirby added.

The Palestinian government condemned the airstrikes and called on the international community to compel Israel into stopping the attacks.

“The presidency called on the international community to compel Israel to stop this aggression against our people everywhere, particularly in Gaza, and to provide them with international protection,” it said in a statement.

The tension between the Israelis and their neighbors is not something new. There have been frequent wars, especially between Israel and Palestine. While everyone hopes that the airstrikes will come to an end soon, most people still wish for a lasting solution to the crisis.