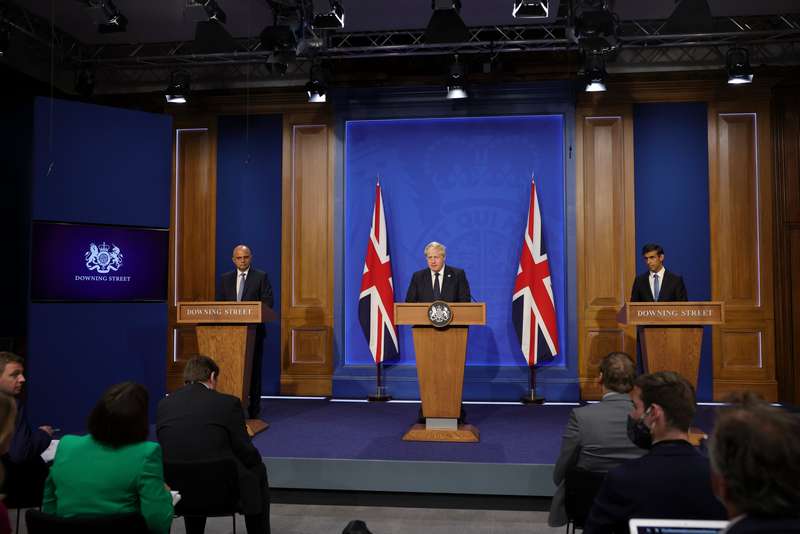 Boris Johnson’s increasingly perilous position as UK Prime Minister received two massive blows in a matter of minutes on Tuesday 5th July, when firstly his Secretary of State for Health, Sajid Javid resigned from his post, followed almost immediately by the resignation of the Chancellor of the Exchequer, Rishi Sunak.

The loss of two of his most senior cabinet ministers pushes Mr Johnson’s leadership to a new level of crisis, coming just weeks after he managed to survive a considerable push from within his own party for his removal, when he won a majority backing in a “no-confidence” vote.

In resignation letters addressed to the Prime Minister and published soon after the announcements, Mr Javid first spoke of his pride in serving his country through incredibly challenging times, but revealed that it was with “enormous regret” that he felt unable to continue in the role in “good conscience.” He went on to say: “The tone you set as leader, and the values you represent, reflect on your colleagues, your party, and ultimately the country. Conservatives may not always have been popular, but we have been competent in acting in the national interest. Sadly, in the current circumstances, the public are concluding that we are neither.” Then despite finding some words of praise for Mr Johnson achieving what he described as “some commendable legacies in unprecedented times”, he revealed that he was compelled to leave because he too had now “lost confidence” in him.

Mr Sunak wrote of his “deep sadness” in his resignation and stressed that the decision had not been taken lightly, especially with the backdrop of the war in Ukraine and economic consequences of the pandemic, taken into consideration. Nevertheless, he believed “the public rightly expect government to be conducted properly, competently and seriously”; before acknowledging that he recognised that this could be his last ministerial job, but added “I believe these standards are worth fighting for and that is why I am resigning.” Then in a revealing closing line he announced that “in preparation for our proposed joint speech on the economy next week, it has become clear to me that our approaches are fundamentally too different.”

Predictably the opposition leader Sir Kier Starmer, had no inclination to sympathise and certainly didn’t hold back when speaking out following the news of the two ministerial departures. He was fiercely critical of the pair, stating: “They have been his cheerleaders throughout this sorry saga: backing him when he broke the law, backing him when he lied repeatedly, backing him when he mocked the sacrifices of the British people. In doing so, they have been complicit every step of the way, as he has disgraced his office and let down his country. If they had a shred of integrity they would have gone months ago.“

Experienced commentators now believe Mr Johnson is in a very grave situation with regard to retaining his position. Despite managing to hold on, very often against the odds, this could be the spark that brings about his downfall. He will undoubtedly be determined to stay, but the walls are closing in around him, and his supporters are diminishing by the day. The success he achieved in the no confidence vote, should have been the signal for unity, but the party is in turmoil and although current government rules mean that confidence votes can only happen once a year, there remains a possibility that a change could be forced. If that were to happen, then Mr Johnson would be unlikely to survive a second vote.

He could of course throw in towel and “walk”, but the chances of that seem remote. Either way, the UK government is in disarray.