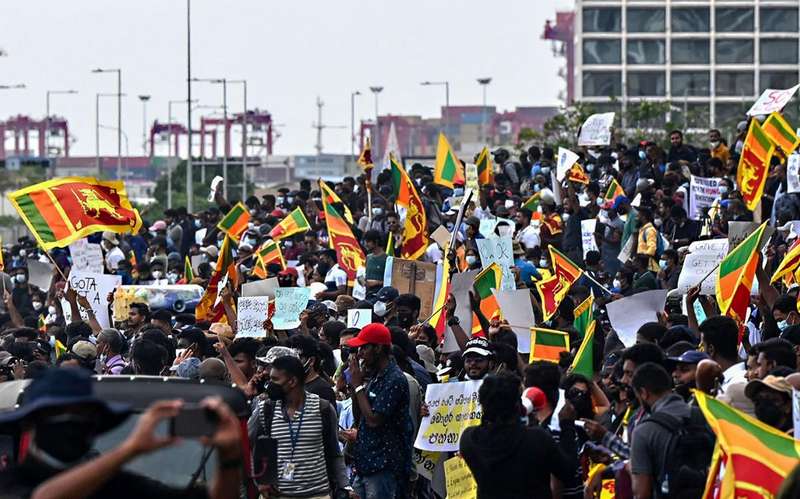 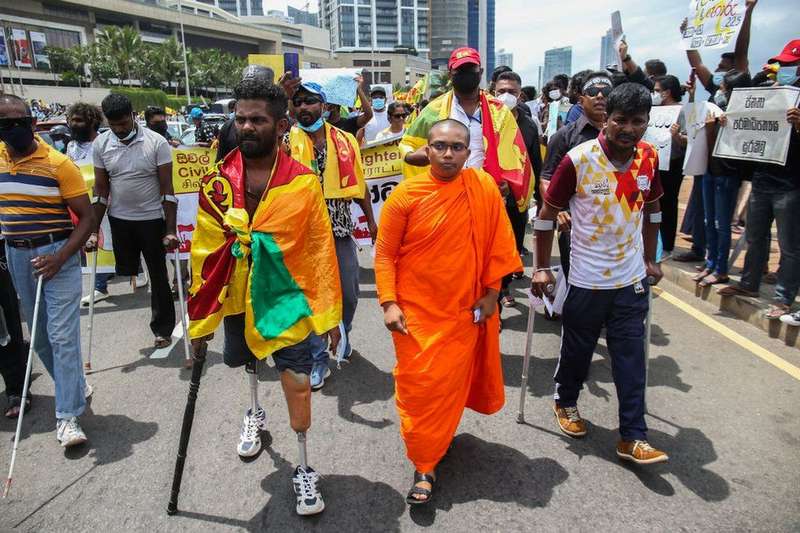 It was a sight to behold as swarms of protesters in Sri Lanka took over the capital city of Columbo in a bid to remove President Rajapaksa from office. Citizens from different parts of the country took buses and trains to Columbo on Saturday despite the fuel shortage in the Country.

Soon after the protesters arrived at Columbo, they went straight to the President’s office and official residence. The police and the military tried to block the protesters from entering Rajapaksa’s quarters and office, but they managed to find their way into the palatial apartment.

The protesters got angrier after seeing the luxury at the Secretariat, saying it was a sign that the government does not care about the citizens.

“When the whole country is under such strain people have come here to release that pressure. When you see the luxuries in this house, it is obvious that they don’t have time to work for the country,” Chanuka Jayasuriya said.

Footages from the scene showed protesters diving into the President’s swimming pool while others were seen eating lunch inside the President’s dining hall. Other protesters also stormed Rajapaksa’s bedroom, and others could be seen checking his wardrobe.

The protest was a result of the economic crisis ravaging the entire country. Last week, the Prime Minister admitted that Sri Lanka has become bankrupt, and talks with the IMF are difficult. Read More

According to reports, the President evacuated the residence before the protest started on Saturday as plans were underway days before it started.

The Protesters are demanding the immediate resignation of President Gotabaya Rajapaksa, who alongside his brother, ruled the country for years. The protesters believe that the President was responsible for the economic woes in the country. Just two months ago, Prime Minister Mahinda Rajapaksa resigned after a series of protests and was replaced by Ranil Wickremesinghe.

The economic crisis in Sri Lanka is arguably the worse in the Island country of 22 million people. Last month, the country experienced inflation of over 50%, and there is no sign of slowing down. Last week, the Prime Minister said the Country has gone bankrupt. The implication is that Sri Lanka does not have enough money to import food, fuel, medicines, and other necessities.

Last month, the country asked its citizens to stop buying fuel and that only essential users would be allowed to purchase the product. The military was deployed to ensure compliance at the fueling stations.

While the government is blaming the Covid 19 pandemic, the citizens have blamed the policies of the Rajapaksa brothers for the economic downfall. Talks to get the IMF to provide bailout funds have also failed.

THE PRIME MINISTER AND PRESIDENT TO RESIGN

The protesters are not only demanding the resignation of the President but also that of the new Prime Minister, that has spent barely two months in office. During Saturday’s protest, the house of the Prime Minister was burnt by angry Sri Lankans. Ranil Wickremesinghe has now agreed to resign after meeting top party officials.

According to him, the decision was necessary for the safety of citizens.

“To ensure the continuation of the Government including the safety of all citizens I accept the best recommendation of the Party Leaders today, to make way for an All-Party Government. To facilitate this I will resign as Prime Minister,” Ranil Wickremesinghe said on Twitter.

There are also indications that President Rajapaksa will resign on Wednesday. Although the embattled leader has not released any official statement, Speaker of Parliament Mahinda Yapa said in a video statement that the President has decided to step down.

“The decision to step down on 13 July was taken to ensure a peaceful handover of power. I, therefore, request the public to respect the law and maintain peace,” the speaker said.

Many expected that after Saturday’s protest, calm would return to the hungry nation. Unfortunately, after two nights, the protesters are still at the Presidential Palace. As of Monday morning, the protesters have not shown any sign of relenting. They have vowed that unless the government is changed completely, they would continue to remain at the palace.

“The president has to resign, the prime minister has to resign and the government has to go,” playwright Ruwanthie de Chickera said at a news conference at the sight of the protest.

All Sri Lankans are represented in the protest, from priests to labor unions and student unions.

The U.S Secretary of State, Anthony Blinken, has said Russia is responsible for the economic woes in Ukraine.

“We’re seeing the impact of this Russian aggression playing out everywhere. It may have contributed to the situation in Sri Lanka.  We’re concerned about the implications around the world,” Blinken said. “What we are seeing around the world is growing food insecurity that has been significantly exacerbated by the Russian aggression against Ukraine.

Blinken, therefore, urged the Sri Lankan parliament to act speedily for the interest of the country.

“We would urge the Sri Lankan parliament to approach this with a commitment to the betterment of the country, not any one political party,” Blinken added. “It’s incumbent on the government — whether it’s a new constitutionally selected government or existing government — to work quickly to try to identify and implement solutions that will bring back the prospect of long-term economic stability.”

It is unlikely that there will be calm in Columbo until Wednesday. The President’s resignation might put a natural end to the protest. However, the responsibility that awaits the new President and Prime Minister is scary.