Who replaces Boris Johnson? Over 10 mps battle to be uk prime minister 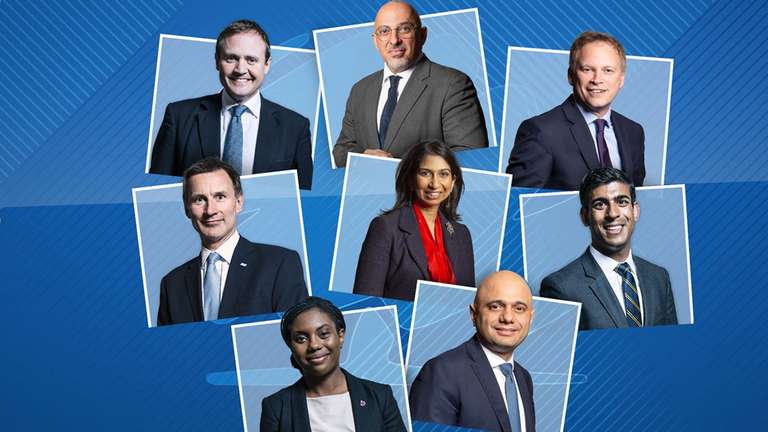 The race to replace Prime Minister Boris Johnson has already begun, with over ten MPs indicating interest in the seat. Most of these contenders have promised to cut taxes once they take over from Boris Johson. Unfortunately, the resignation of Boris Johson as Prime Minister has not in any way ended the division within the party.

On Monday, former health secretary, Javid, said the conservative party’s “reputation on most values and policies has slid away.” Like Javid, most conservatives are scared that the party might collapse and give power back to labour if it does not fix its internal crises. Others strongly believe that the survival of the party depends on who it selects as its next prime minister.

Who becomes the next Prime Minister of the UK? What would be the plans of the new Prime Minister? Here is a summary of all members of parliament that have indicated an interest in the top job.

Sunak Rishi was among the first two ministers that resigned from the Boris Johson government. Soon after Johnson’s resignation, Rishi Sunak declared for Prime Minister. Many tories have considered him the favourite for the job.

In a video posted on his Twitter page, the former Chancellor said the country needed someone that could make the right decisions.

“Someone has to grip this moment and make the right decisions. That’s why I’m standing to be the next leader of the Conservative Party and your prime minister,” Sunak said.

“Do we confront this moment with honesty seriousness and determination or do we tell ourselves comforting fairy tales that might make us feel better in the moment but will leave our children worse off tomorrow,” he added.

Unlike his colleagues, Sunak did not promise tax cuts until the economy gets better. Despite his advantages, some controversies would make the race difficult for him. They include his wife’s tax affairs and his breaking of the Covid-19 rules.

Minister of State, Penny Mordaunt, has declared for the leadership of the Conservative Party. She and her supporters have described her as Labour’s worst nightmare.

The 48 years old has promised to cut VAT on fuel by 50%. “I will introduce an immediate 50% cut in VAT on fuel, reducing filling up the average family car by £10 per fill,” Penny said on social media.

“Our leadership has to change. It needs to become a little less about the leader and a lot more about the ship,” she tweeted. Although she is very optimistic about victory, the divisions in her party are issues of concern.

Penny became MP of Portsmouth in 2010 and was the first female defence secretary in 2019.

The immediate past Health Secretary has declared to run for the position of Prime Minister. Sajid was the first to resign from the Boris Johson government last week. He also contested in the 2019 elections and came out among the top four. He later stepped down to support the candidacy of Boris Johnson.

Like his colleagues, he has promised tax cuts and has warned members of his party of the possibility of losing out to the labour party.

“Over the last couple of years, our reputation on most values and policies has slid away. Too many people now believe that Labour is fit to govern. Some of them say that Labour are more competent and even more likely to cut taxes,” Sajid said on Monday.

He called for a debate among the candidates, saying if the party gets it wrong, it might go into political oblivion.

“The way things were going recently, I feared our party was on a trajectory to the same electoral oblivion once again,” Sajid added.

Among the first to indicate interest in the position of Prime Minister was Kemi Badenoch. The 42-year-old MP said the country voted for change in the last two elections but despite the efforts of the Boris Johnson-led government, things have not changed a lot.

“In 2016 and again in 2019 our country voted for change. Yet still, a sense that things aren’t working remains. Despite his great success with Covid vaccines, supporting Ukraine, and leading us out of the EU, our prime minister came to embody that feeling,” Kemi wrote in The Times Newspaper.

The Nigerian-born MP added that Boris Johnson was not the cause of the problems but he was only a symptom of them.

“But [Boris Johson] was a symptom of the problems we face, not the cause of them. People are exhausted by platitudes and empty rhetoric. Loving our country, our people or our party is not enough,” Kemi added.  “What’s missing is an intellectual grasp of what is required to run the country in an era of increased polarization, protectionism, and populism amplified by social media.”

The former minister of Levelling up was one of the numerous ministers that exited Boris Johnson’s Government during the massive resignations.

Kemi, like some of his colleagues, has promised tax cuts and low regulations. She was elected to the London Assembly before becoming MP for Saffron Walden in 2017.

Suella Braverman was among the first to indicate her interest in the race. She subtly disclosed her intention before the resignation of Prime Minister Johnson. She said the country had done much for her and she would be glad to repay it with her service as Prime Minister.

“I love this country, my parents came here with absolutely nothing, and it was Britain that gave them hope, security, and opportunity. This country has afforded me incredible opportunities in education and in my career. I owe a debt of gratitude to this country and to serve as PM would be the greatest honour, so yes, I will try,” Suella said last week.

Braverman has vowed to remove the UK from the jurisdiction of the European Court of Human Rights (ECHR), and cut taxes. She also criticized the net zero emissions target.

Another MP that has declared interest to become the leader of the conservative party and Prime Minister of the UK is Rehman Chishti. In a video released on his Facebook page, the MP said he would handle the country with fresh ideas.

“I’m standing to be the next leader of the Conservative Party and your Prime Minister. For me, it’s about aspirational conservatism, fresh ideas, fresh team for a fresh start taking our great country forward,” Rehman Chishti also said on Twitter.

Rehman has been a member of Parliament for Gillingham and Rainham since 2010. He was a former member of the labour party and a former barrister.

The list of contenders would have been incomplete without the presence of Jeremy Hunt. He came second during the 2019 leadership contest of the party. He has vowed to restore the trust of voters if elected as Prime Minister.

Like other contenders, the former health secretary has promised tax cuts and even cut taxes further if the economy improves. According to him, his three points are to restore trust, grow the economy and win the next election.

“It’s very straightforward why I want to do it … It is because we have to restore trust, grow the economy, and win the next election. Those are the three things that have to happen and I believe I can do that,” Mr. Hunt told The Telegraph.

Mr. Hunt, 55, turned down the offer to become defence secretary, and he has since remained a critic of Boris Johnson’s government. He also criticized Johnson’s leadership of the Conservative Party, saying the party lost the trust of many electorates.

“I started the week desperately worried for the country and for the Conservative Party because we were rapidly losing the trust of large swathes of the electorate, including many people who voted for us,” he said. “We were in a situation where the country was facing paralysis; the Government wasn’t able to deliver what it promised. So I think I feel a sense of relief that that at least has been resolved.”

Transport Secretary Grant Shapps has also declared to run for the office of the Prime Minister. In his declaration, the former international development minister said: “we must map a clear path to lower taxes, not just expressing good intentions.”

Grant Shapps was a former cancer patient who had undergone surgery before becoming an MP in 2005. He served as a minister under David Cameron and was also the co-chairman of the conservative party.

Mr. Grant said his government would end the distractions at the centre for the remaining two years of the government.

“We have had two-and-a-half years of tactical government by an often distracted centre. This must end. We must be a strategic government, sober in its analysis, and not chasing the next headline,” Grant said.

Foreign Minister Liz Truss is among those that have promised to reduce tax if they emerge Prime Minister. She promised to “bring down the size of the state and the tax burden.”

She also promised to “start cutting taxes from day one to take immediate action to help people deal with the cost of living.”

Truss first became a member of parliament in 2010 and has since held several positions. She is the second woman to head the foreign office.

Nadhim was born in Iraq and relocated to the UK during the brutal rule of Saddam Hussein. He became Prime Minister in 2010.

Veteran Tugendhat who served in Iraq and Afghanistan, has declared to replace Boris Johson. He said it was time for renewal. Tom is a moderate who projects pragmatism. He also promised to increase investment outside the southeast if he becomes PM.

CANDIDATES NEED THE SUPPORT OF AT LEAST 20 MPs

The 1922 committee has adjusted its rules in the quest to get a new Prime Minister. Before now, a candidate with the support of ten MPs would go through, but with the new adjustment, each candidate would need the backing of at least 20 MPs.

The reason for the adjustment was to reduce the number of contenders for the top job. Sir Graham Brady, chairman of the Tories’ 1922 committee announced the changes and the election timetable on Monday.

BORIS JOHNSON PROMISES TO BE NEUTRAL

Prime Minister Boris Johnson has promised to stay neutral in selecting the new prime minister. He said he “wouldn’t want to damage anybody’s chances.” Mr. Johnson promised to discharge his duties during the time left as Prime Minister.

Nominations will end on Tuesday, while the new Prime Minister and leader of the Conservative Party will be announced on Monday, September 5.