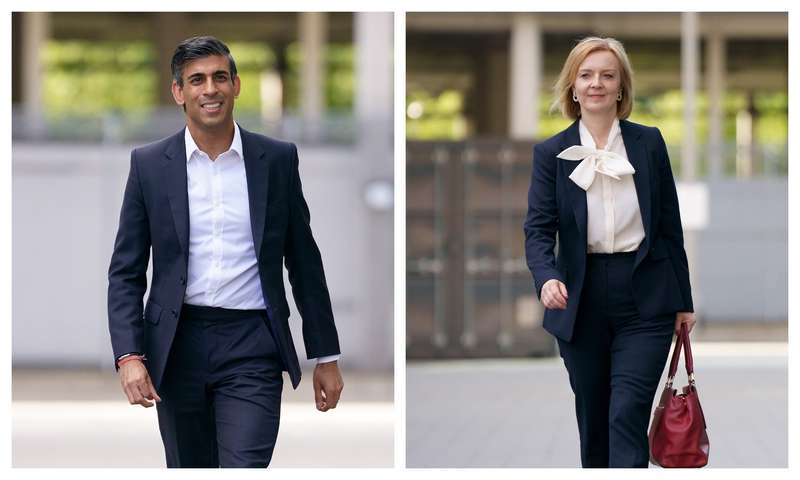 Rishi Sunak and Liz Truss have emerged as the final two candidates in the contest for the post of Prime Minister in the UK. In a keenly contested final round of votes, former Chancellor Rishi Sunak expectedly tops the chart with 137 votes. Foreign secretary Liz Truss came second with 113 votes, while Penny Mordaunt, who has consistently come second in all the voting rounds, came third with 105 votes.

After Tuesday’s votes, it was clear that Rishi Sunak had already secured his place in the final two spots, and the race for a final spot was between Penny Mordaunt and Liz Truss. As predicted, Liz Truss gained more votes from the 51 Kemi Badenoch votes after 27 votes were added to the 86 she got on Tuesday. Penny Mordaunt managed to get an additional 13 votes, while Sunak got 19 more votes than in the fourth round.

With the results, the top two candidates now have over one month to convince the wider Conservative population on why they are worthy of being Prime Ministers. Although Rishi Sunak enjoys the favor of the conservative MPs, opinion pools suggest that Liz Truss is the favorite in the race. The former Chancellor might have more job to do than his fellow contestant.

Reacting to the results,  foreign secretary LIZ Truss thanked her colleagues that contested for the party’s leadership, saying they “contributed enormously to the Conservative Party and to public life.”

Liz Truss said: “I am excited to now take to the country to make the case to the Conservative Party about my bold new economic plan that will cut taxes, grow our economy and unleash the potential of everyone in our United Kingdom.”

She also promised to unite the party and hit the ground running from day one as Prime Minister.

“As prime minister I would hit the ground running from day one, unite the party and govern in line with Conservative values,” she added in her statement. “I am incredibly proud to be a part of the Conservative and Unionist Party and am excited to spend the next few weeks proving to all of our brilliant members exactly why I am the right person to lead it and our great nation.”

Rishi Sunak also thanked his supporters and said he was humbled by the outcome of the ballots.

“Thank you so much everyone for your support. I am so humbled. I am delighted that we got to this stage in the contest. I will not let you down. I’ll work as hard as I can to get our message out to the country,”  Rishi Sunak said in a video statement on Twitter. “We need to restore trust, rebuild the economy, and reunite our country. I am confident that we can do that and we got a positive message to take to all our members now.”

Sunak added that he is the only candidate capable of beating labour leader Keir Starmer in a general election.

When asked about his achievement as Chancellor, Sunak said: “I’ve always said I want to be honest about the challenges we face. I helped get the country through a difficult period over the last couple of years.”

Over 160,000 conservatives will now decide who becomes Prime Minister on September 5. Sunak and Truss will now woo the electorates as their fates are no longer in the hands of the conservative MPs.