Sunak leads the British Prime Minister race, as Johnson hurries back to London to join the contest 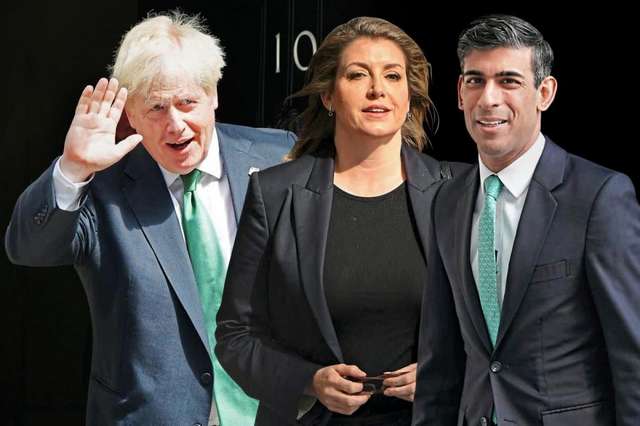 Although Rishi Sunak has not officially declared his intention to run, he already had the support of about 100 MPs. The former Chancellor is currently the only contestant in the race that had over 90 endorsements from MPs. However, he is said to have surpassed the 100th mark on Friday morning, but some MPs have not publicly declared their support for him.

Mr. Javid said he was supporting Sunak because he has “what it takes to match the challenges” facing the UK.

“Our responsibility as public servants is to make decisions in the national interest, especially at a time like this. Our country desperately needs economic stability, hard-headed decision-making, and strong leadership,” Javid said, adding that he is “the right person to lead our party and take the country forward.”

Like Javid, Tom Tugendhat said he was supporting Sunak because the country urgently needed his competence and experience to regain economic stability and urged members of his political party to put politics aside and support the former Chancellor.

“As servants of the people, we must put politics aside. This is no time for political games, for settling scores, or for looking backward” Tugendhat said.

“We need economic stability, and to put the country before party or personal gain. That is what the public rightly expects,” he continued. “That is our duty.”

Penny Mordaunt, the first to declare

Penny Mordaunt has become the first member of the UK parliament to officially declare to run for the position of Prime minister after Liz Truss resigned on Thursday.

The leader of the house of commons made her intention known on Friday, saying she was responding to the demands and support of her colleagues.

“I’m running to be the leader of the Conservative Party and your Prime Minister – to unite our country, deliver our pledges, and win the next General election,” Penny Mordaunt.

“We owe it to the country to have a detailed plan of how we will deliver. It is not enough to tell people we understand their issues. Our success should be measured in whether people really feel that we can support them,” Ms. Mordaunt later told the Telegraph.

Like every other contender in the race, Mordaunt will have until Monday to secure the endorsement of 100 Conservative MPs. As it stands on Friday night, the leader of the House of Commons already had the endorsement of 21 MPs, trailing behind Rishi Sunak and Boris Johnson, who are yet to officially declare their intentions.

Last night, Boris Johson was seen on a flight from the Dominican Republic to London. His holiday has been cut short by his desire to return as leader of the Conservative Party and Prime Minister of the UK.

Barely six weeks after his resignation, Johnson told his allies that he was up for the race after the contest was declared open following Truss’ resignation, and he is one to contend with. He is expected to officially declare for the race before Monday’s deadline.

Johnson is already enjoying the support of over 40 MPs, which is more than the support for Penny Mordaunt. There can only be a maximum of three MPs in the race to become prime minister as there are only 357 Conservative MPs. If Johnson could get up to 100 endorsements, he is most likely to face Rishi Sunak in the final ballot to decide who becomes the new premier.

One of Johnson’s supporters, Mr. Duddridge said the former Prime minister had the support needed to return to number 10.

He said: “He is the only election winner we have that has a proven track record in London, on Brexit, and in gaining the mandate we have now.”

The process of choosing a new prime minister

If there is only one contestant that reached the 100 endorsements of Conservative MPs, he automatically becomes the Prime Minister. Rishi Sunak will likely become the new leader if that is to happen.