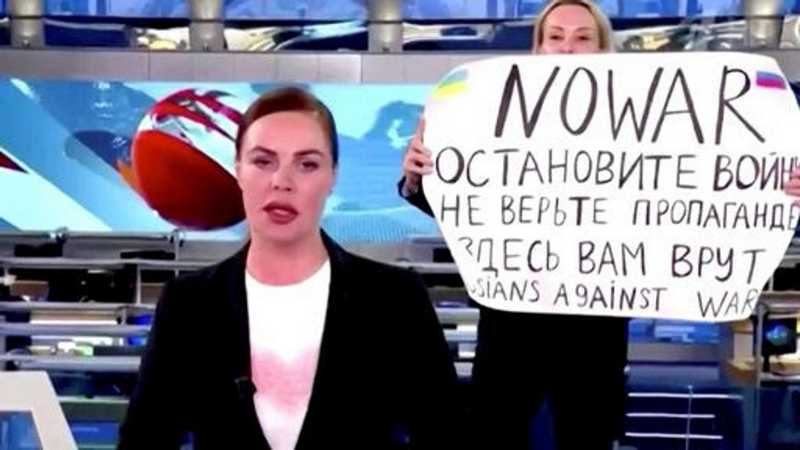 Marina Ovsyannikova, a former State-owned TV journalist who quit her job a few months ago after making an on-air protest against the Russian war in Ukraine, had her home raided by Russian authorities on Wednesday. Her lawyer, Dmitry Zakhvatov, confirmed that a criminal case was also launched against the 44-year-old Russian on the charge of spreading “false information” about the Russian armed forces.

The Russian Government, after the invasion of Ukraine, enacted a law that makes anyone who publishes so-called “false information” about the country’s military liable to serve a jail term of up to 15 years.

Speaking further, Zakhvatov said that a protest Marina staged last month is most likely connected to this case, during which she was seen holding a banner that read, “Putin (Russian president) is a killer, his soldiers are fascists.”

According to him, Ovsyannikova is expected to be summoned before the Investigative Committee for interrogation following her arrest.

‘They are lying to you’

Marina Ovsyannikova is a famous journalist who was employed on the Channel One Russia TV channel. Since the early 2000s, she has worked for Channel One’s Vremya, Russia’s primary evening newscast.

Marina made international headlines on March 14, when she interrupted a live broadcast on the Tv channel by suddenly appearing behind the anchor of the evening news while holding a poster that said: “stop the war, don’t believe the propaganda, they are lying to you here,” in a protest against the Russian invasion of Ukraine.

She received a fine of 30,000 rubles ($270 at the time) and was accused of insulting the Russian military.

Earlier she recorded a video message which was released online.

“Unfortunately, for the last two years, I have been working at Channel One, and I am deeply ashamed about that right now,” Ovsyannikova said in the video. “I am ashamed that I’ve allowed people to lie from TV screens. I am ashamed that I let the Russian people be zombified. We were silent in 2014 when all of this was just starting. We did not protest when the Kremlin poisoned Navalny. We were watching the anti-human regime silently. And now the whole world has turned its back on us. Ten generations of our descendants will not be able to wash off the shame of this fratricidal war.”

Ovsyannikova, after quitting her job, has taken on a more activist role, organizing antiwar protests and loudly opposing the war.

This has resulted in her yet again being fined twice more recently for disparaging the military. So far, anti-war protests across the country have resulted in at least 15,000 people being arrested.

“The Russian people can think and are smart. Only we can stop this insanity,” Ovsyannikova said while speaking further in her online video message. “Go outside and protest. Do not be afraid. They can’t jail us all”

“Marina is facing incredible risks to her life, her safety, her future… She knew that, and she willingly took that risk… My hat is off to her.”