Over 1000 People Dead as Pakistan Battles Scary Rains and Floods 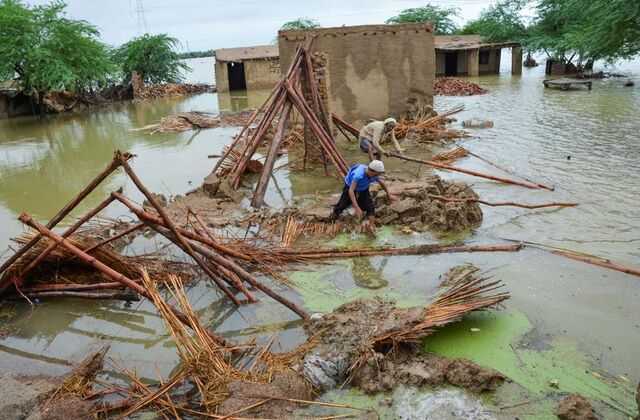 ​The past weeks have been disastrous for the people of Pakistan, as at least 15% of the country’s population has been affected by historic monsoon rains and flooding. The unusual rainfalls and the floodings have affected at least 30 million people, and officials say the end of the rainfall could still be far off. The country’s climate change minister described it as a “climate-induced humanitarian disaster of epic proportions.”

“33 million have been affected, in different ways; the final homeless figure is being assessed,” Climate Change Minister Sherry Rehman also told Reuters. “Needs assessment is being done, we have to make U.N.’s international flash appeal; this is not the task of one country or one province, it is a climate-induced disaster.”

The region of Sindh has seen almost 800% more rainfall this month than the August average. Officials say at least 23 districts have been declared calamity-hit.

The rains are believed to be the worse in the country in over 60 years. Ms. Sherry said the current situation in Pakistan was worse than the one in 2010 when 20% of the country was consumed by water.

“What we see now is an ocean of water submerging entire districts of Pakistan by an unprecedented monsoon cycle that just does not stop, nor does it allow space for a rescue and recovery respite,” Rehman told the Guardian. “Pakistan has never seen unrelenting torrential rains like this. This is very far from a normal monsoon. It is a climate dystopia at our doorstep.”

In its latest estimate on Sunday, The National Disaster Management Authority said 119 people died within the previous 24 hours. With the latest figures, 1,033 people have died since mid-June when the rains started, and almost 1,500 have been injured.

On Saturday, authorities also reported the death of 45 people who died in connection with the flood.

In all of these, most rescuers cannot do much as many parts of the country have been cut off by water.  Officials say at least 150km of roads have been damaged within the last 24 hours, and the flood has destroyed at least 15 bridges and 82,000 homes. Pictures published on social media show rescuers risking their lives to save people from flooded areas.

Since the rains started in June, over 3,000 kilometres of roads and 130 bridges have been destroyed, and in total, 495,000 homes are either partially or totally damaged by the flood.

A Changing Climate and Stagnant People

Recently, world leaders have met to discuss climate change several times. Despite the several meetings, very little has been seen on the ground regarding the promised changes. The harsh weather in different countries this year has shown the world that the fight against climate change is not one to be fought with the mouth.

A volunteer in the relief operation in Larkana, one of the cities affected by the flood said: “People around the world talk about climate change and something it’s only a theory.”

“We are seeing for ourselves on the ground that climate change is happening. We’ve never seen such rains in one year…now we need to think about how we build for the future – how do we even start?” he said.

For Bhutto-Zardari, the son of assassinated former Prime Minister, Pakistan does not deserve the punishment it is getting from climate change because of the insignificant amount of carbon it is responsible for.

“Despite the fact that Pakistan contributes negligible amounts to the overall carbon footprint … we are devastated by climate disasters such as these time and time again, and we have to adapt within our limited resources, however, we can, to live in this new environment,” he said.

“We are at the moment at the ground zero of the frontline of extreme weather events, in an unrelenting cascade of heatwaves, forest fires, flash floods, multiple glacial lake outbursts, flood events, and now the monster monsoon of the decade is wreaking nonstop havoc throughout the country,” Minister of Climate Change, Senator Sherry Rehman said in a video posted on Twitter.

“We need supplies, we need medicine and please rebuild the bridge, we are left with nothing now. Many people are sick and can’t leave the village on foot. Kindly get the bridge built, it’s the main connection with the city.” That was the content of a letter thrown over by a stranded citizen, the BBC reported.

That short letter shows the pain Pakistanis are passing through, and one thing Pakistan needs more than ever before now is assistance. From the country’s leader to ordinary citizens have called on the international community and the IMF to come to their aid.

Pakistan’s prime minister, Shehbaz Sharif, was shocked at seeing the damages caused by the flood in the Balochistan province.

“I have never seen such flood in my personal and professional life. All four corners of Pakistan are underwater. I request people to come ahead and help,” he said.

Bhutto-Zardari said the south Asian country needed more than the help of the IMF. He said: “Going forward, I would expect not only the IMF, but the international community and international agencies to truly grasp the level of devastation.”

The call for help did not end with the government officials in the country. Nizamuddin, a retired police officer, said they were in dire need of medicines and food.

“We are in dire need of medicines, dry ration, tents, and medical camps. We appeal to the government to help us,” he said.

Parts of the country that were cut off by the flood are also suffering from food shortages. One government official told theGuardian that he was aware of deaths resulting from starvation.

“I have been told that two children had died due to hunger in Mach, a town near Quetta, which lost the road connections with other parts of the province,” he said.

Jamila, another survivor of the flooding, said they were receiving aid, but it was not enough.

“We see dead animals and livestock floating in the water. People are getting sick and need clean drinking water and food. We are getting donations, but that is not enough,” Jamila said.

Several countries have heard the cry for help. On Sunday evening, Azerbaijan promised 2 million USD aid for the flood victims.

“By the instructions of the[President of Azerbaijan], Azerbaijan will provide to Pakistan 2 million USD aid to assist in the elimination of the consequences of large-scale floods,” Ali Alizada, the country’s ambassador to Iran, said on Twitter.

On Saturday, the UK also pledged Up to £1.5 million in response to the disaster in Pakistan.