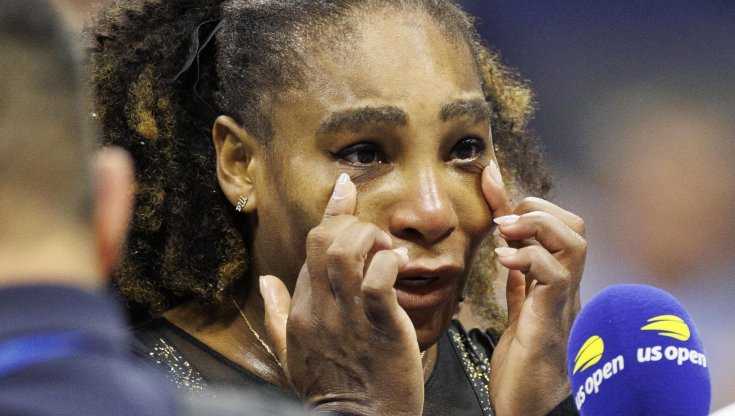 The crowd of 23,859 filled the Arthur Ashe Stadium to the brim on Friday with the hope of extending Serena William’s resignation to next week. Unfortunately, despite the massive support for the athlete, she was second best for the night, which was the end of her over 20 years career.

When asked after the game if she would love to extend her time playing tennis, Serena Williams said: “I don’t think so, but you never know.”

In an emotional interview, the 40-year-old thanked her parents for starting everything and gave credit to her older sister, Venus Williams, for her role in her success.

“Thank you, Daddy, I know you are watching…thanks, mom…It all started with my parents, and they deserve everything, so I am really grateful to them. These are happy tears … It has been a fun ride” Williams said tearfully.

“I wouldn’t be Serena if there wasn’t Venus. She’s the only reason Serena Williams ever existed,” she said with her sister watching from the crowd.

Last month, Ms. Williams announced her resignation from the sports, saying it was time to focus on her family and her spiritual goals. Regarding her next chapter, the 23-time grand slam singles winner said she had started a business already.

She said: “It takes a lot of work to get here. Clearly, I’m still capable. It takes a lot more than that. I’m ready to, like, be a mom, explore a different version of Serena.”

“Technically, in the world, I’m still super young, so I want to have a little bit of a life while I’m still walking,” she added.

She lost her final match to Tomljanović, who won 7-5 6-7 (4) 6-1 after three hours on the court. Despite her loss, the 40-year-old mother of one has no doubt left her name in the books of record. She played 847 career matches and won 73 titles to her name.

Tomljanović, who had the rare privilege of being Serena’s last opponent, said she felt sorry because she loved Serena as much as her fans.

“I love Serena just as much as you guys do,” she said in her interview on court. “What she’s done for me, for the sport of tennis, is incredible. I never thought that I’d have a chance to play her in her last match when I remember watching her as a kid in all those finals, so this is a surreal moment for me.”

When asked about how she felt about playing against Serena in a stadium filled with her supporters, Tomljanović said the pressure was on Serena, whom she described as the greatest of all time.

“I just thought she would beat me, you know. The pressure wasn’t on me. She’s Serena,” she said. “I didn’t think that I — even to the last point I knew that she’s in a really good position to win even when she’s down 5-1.”

I don’t know how many match points I needed to finish it off, but that’s just who she is. She’s the greatest of all time, period,” she concluded.

For Serena Williams, she felt she did her best, but her opponent performed a little better.

“I’ve been down before. I’ve been down, like, 5-1, I think before and come back. I don’t really give up,” Williams said.

Before the start of the competition, it was certain that it was the last for Serena. Most of her fans would not want to miss her final match, which made them attend each game as if it was her last.

The who is who of America was present on the night of her last game. Notable celebrities and stars who attended include Tiger Woods, Russell Wilson, President Bill Clinton, Francisco Lindor, and many more.

Others who could not attend her last game took to social media to congratulate the athlete on a successful career.

For Michelle Obama, she said people like her were lucky to be able to watch a “young girl from Compton grow up to become one of the greatest athletes of all time.”

“I’m proud of you, my friend—and I can’t wait to see the lives you continue to transform with your talents,” the former US first lady said on Twitter.

“Nothing but massive respect for Serena Williams. Fought until the very end and made her opponent have to work for the win. She is the GOAT. A champion. A legend who made tennis so interesting. For decades,” American writer Roxane gay tweeted.

Former basketball player Earvin Magic Johnson said Williams was a role model to many and a living proof that you can achieve anything no matter where you come from.

“We just witnessed the last US Open for the greatest of all time, Serena Williams!! Serena has meant so much to sports, the game of tennis, the world, every little girl, and even more to every little Black girl across the globe,” Earvin Magic Johnson also tweeted.

A Career Short of One Title

Serena Williams won 23 grand slam titles during her 27 years career. That was one title short of Margaret Court, who won 24 titles. That is the only reason some will argue that she is not the GOAT of tennis. However, for the majority, Williams deserved to be crowned the greatest of all time. Williams thinks so too, but it is not her decision to make.

In her interview with vogue magazine last month, she said: “There are people who say I’m not the GOAT because I didn’t pass Margaret Court’s record of 24 grand slam titles, which she achieved before the “open era” that began in 1968.”

“The way I see it, I should have had 30-plus grand slams,” she added during the interview.

Although it was almost certain that this year’s US Open was not hers to win, there was tiny hope that she could do the impossible. Now she has crashed out. But for many who saw her on the court, she is the greatest of all time (GOAT). Even those with a contrary view would not deny the fact that the history of tennis cannot be written without Williams’ name somewhere at the top.