Who is Liz Truss the new Prime Minister of UK? 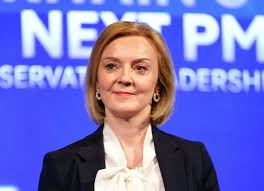 ​She officially became the new Prime Minister of the UK on Tuesday 6 September, but who exactly is Liz Truss?

Mary Elizabeth Truss was born in Oxford in July 1975, the eldest of four siblings. She has been known by her middle name ever since a very young age. Her parents John and Priscilla took the family to Paisley, near Glasgow, when she was just four years old, before moving to the affluent Roundhay area of Leeds, in 1985.

At twelve years old she spent a year in British Columbia, Canada, whilst her father taught at the University there. She went to Park Crest school and she has spoken of being impressed with the Canadian attitude towards learning. Back in Leeds she attended Roundhay Comprehensive School, which she has said since is where she first was inspired to go into politics, due to a belief she gained with regards to pupils being held back in their education, in stark contrast to her Canada experience, where she noted that it was “really good to be top of the class.”

She was a bright pupil and won a place at Merton College, Oxford, studying philosophy, economics, and of course, politics. She became president of the Oxford University Liberal Democrats, and amongst her campaigns was one to abolish the monarchy. At the party’s conference in 1994, and whilst still a teenager, she told delegates: “We Liberal Democrats believe in opportunity for all. We do not believe people are born to rule.” Much to the dismay Paddy Ashdown, the then leader of the party.

David Laws, later a cabinet minister in the coalition government, was a junior adviser to Ashdown at the time and said: “I remember Paddy pacing up and down the press room in Brighton and saying, ‘Oh my God, if this motion that Liz is moving manages to get passed, that would be the end of the Liberal Democrats’.”

Another campaign was against the Criminal Justice and Public Order Act 1994; and she also supported the legalisation of cannabis, apparently distributing leaflets with the message “free the weed” at a Freshers Fair stall, during that period in her life.

Her mother who was a nurse, was also a member of the Campaign for Nuclear Disarmament and took a young Liz on “ban the bomb” marches, where she has spoken of chanting anti-Margaret Thatcher slogans. When Ms Truss later stood for election to Parliament as a Conservative, her mother agreed to campaign for her, while her father declined to do so.

Ms Truss graduated in 1996, which was the same year that she joined the Conservative Party.

Her conversion to a conservative, seemingly shocked her left-leaning parents, but fellow Lib Dem’s of the time felt it was just natural progression after meeting with, and sharing committed beliefs with like-minded people, on things like personal freedom, with the ability to shape life and destiny.

Her brother, Francis, speaking in 2017, revealed several interesting traits about his sister which suddenly become quite relevant. “She is a very opinionated person in terms of what she wants and her desire to always win. If the family played Monopoly or Cluedo, she just had to win every time. She would create some special system to work out how exactly she could guarantee victory.”

He added: She had a dalliance with vegetarianism, and even at fourteen, she would be in a restaurant with the family and was precocious enough to state exactly what she did and didn’t want.”

It must have felt inevitable that she would get involved in politics in some capacity when she grew up, but nobody in her family would have predicted the path she eventually took, although Francis, who is the youngest of her three brothers said: “Serious political debate was the order of the day in the Truss household; you didn’t sit around talking about the latest Mega-drive game at the dinner table, it was much more political issues and campaigns.”

After her initial graduation she worked as an accountant for Shell, and Cable & Wireless, before marrying in 2000 to fellow accountant, Hugh O’Leary, with whom she has two daughters. After standing as a candidate several times in the early 2000’s, Conservative leader David Cameron put Ms Truss on his “A-list” of priority candidates for the 2010 election, and she was selected to stand for the safe seat of South West Norfolk.

However, she quickly faced a battle against de-selection by the constituency after it was revealed she had had an affair with Tory MP Mark Field, who the party had appointed as her political mentor, some years earlier. Her marriage survived the affair and the effort to oust her failed, with Ms Truss going on to win the seat by more than 13,000 votes.

Ms Truss has campaigned for improved teaching of more rigorous school subjects, especially mathematics. She noted in 2012, that only 20% of British students studied maths to the age of 18 and called for all maths classes to be made compulsory for all those in full-time education. She argued that comprehensive school pupils were being “mis-sold” easy, low-value subjects to boost school results, probably harping back to her own schooling in Leeds.

On 4 September 2012, Ms Truss was appointed as Under-Secretary at the Department for Education, given responsibility for amongst other things: childcare, curriculum reform, behaviour and attendance. Then following a cabinet reshuffle in 2014, she was appointed Secretary of State for Environment, Food and Rural Affairs and immediately spoke out on climate change, before in 2016 moving on to become Secretary of State for Justice and Lord Chancellor – the first woman to hold either position and the first female Lord Chancellor in the thousand-year history of the office.

Between 2017 and 2019 she moved to the position of Chief Secretary to the Treasury, attending the cabinet, but not a full member of it, in what was seen by some as something of a demotion. In 2019, Ms Truss declared that she could be a candidate for the leadership of the party; but ultimately decided not to stand and instead endorsed Boris Johnson to take over from Theresa May.

She was given the position of Secretary of State for International Trade and Minister for Women and Equities. On 19 March 2020, Ms Truss introduced to Parliament the Trade Act 2021, which established the legal framework for the UK to conduct trade deals with nations all around the world. Then in September 2021 she was promoted up to the Secretary of State for Foreign, Commonwealth and Development Affairs and in December received a subsequent appointment as the British Government’s chief negotiator with the EU.

In the EU referendum she campaigned for “Remain”, saying: “Brexit would be a triple tragedy of more rules, more forms, and more delays. I don’t want my daughters to grow up in a world where they need a visa, or permit to work in Europe, or where they are hampered from growing a business because of extortionate call costs and barriers to trade. Every parent wants their children to grow up in a healthy environment with clean water, fresh air, and thriving natural wonders. Being part of the EU helps protect these precious resources and spaces.”

Nevertheless, after her side lost, she changed her mind, arguing that Brexit provided an opportunity to “Shake up the way things work. I believed there would be massive economic problems, but those haven’t come to pass and I have also seen the opportunities. I was wrong to support ‘remain’ and I am prepared to admit I was wrong.”

She is seen as a pragmatic shape-shifter, and wisely kept her hands spotlessly clean during the brutal Conservative power-grab, that eventually saw the end of her friend and scandal-hit Boris Johnson. She refused to openly criticize him, but managed to avoid being seen as part of the inner Mr Johnson circle; a cute move that has now paid dividends.

She now is officially the Prime Minister of the United Kingdom and has indicated that she will not be calling for a General Election until 2024; meaning she has just under two years to impress and convince the general public that she is worthy of such a position.

She will have already negotiated her first tricky encounter, when meeting with the Queen to receive her official appointment, especially as Her Majesty will undoubtedly have been made aware of her anti-monarchy beliefs in her youth.

Many see subtle echoes of Margaret Thatcher in Ms Truss; now that really will have UK citizens stealing themselves for some interesting months ahead.