Period of mourning begins for Her Majesty Queen Elizabeth II 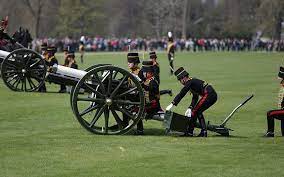 Her Majesty Queen Elizabeth II will be commemorated by all the pomp and ceremony in a way that the British do better than anyone else. The nation has already begun a period of mourning to mark the death of its much loved former monarch. Gun salutes will be fired in the capital and bells will toll in cities, towns, and villages right across the country, with churches, chapels and cathedrals encouraged by the Church of England to open for prayers, or a special service for mourners.

The period of royal mourning, which is separate from a period of national mourning, will be observed from today, until seven days after the Queen’s state funeral, the date of which will be confirmed in due course. The death of a monarch ushers in a period of mourning that is steeped in tradition, and is carefully choreographed over years of planning, codenamed “Operation London Bridge”. On this occasion it will be incorporated with “Operation Unicorn”, the contingency plans put in place were the Queen to die whilst in Scotland.

The last state funeral for a sovereign was held when the Queen’s father, George VI, died in 1952.

King to return to London

Despite the Queen’s passing occurring on Thursday, because the announcement did not come until late afternoon at around 6.30pm, it has been decided that today will be considered the first day of mourning. The new King will return to London from Balmoral to begin coordinating the complex arrangements that have to be put in place. The first thing the public in the capital can expect to hear will be the bells of Westminster Abbey and St Paul’s Cathedral from 12pm. The bells at Windsor Castle will also be tolled at the same time.

Then at 1pm there will be a 96-gun salute, one for every year of the Queen’s life, fired in Hyde Park by the King’s Troop Royal Horse Artillery  and at the same time at the Tower of London, by the Honourable Artillery Company. The new King will have an audience with the new PM as well as a meeting with the Earl Marshal, the Duke of Norfolk, the person in charge of the accession to the throne and the arrangements of Her Majesty’s funeral, to approve officially the schedule for the coming days. He will later make a televised address to the country where he is expected to pay a moving tribute to his mother and pledge his duty to his service as the new sovereign.

Declarations to be made

Dependant upon the precise decisions that are agreed, will determine the exact timetable moving forward. However, King Charles III will need to hold his first Privy Council, probably tomorrow, accompanied by the Queen Consort and Prince William, where personal declarations and oath will be made. The first public proclamation of the new sovereign will then be read in the open air from the Friary Court balcony at St James’s Palace by the Garter King of Arms. Proclamations are made around the city of London and across the country.

The Queen’s coffin will be taken by road to the Palace of Holyroodhouse in Edinburgh, probably on Sunday. A procession is expected along the Royal Mile to St Giles’ Cathedral, with the public possibly getting the opportunity to file past the coffin at a “mini” lying in state whilst at the Cathedral.

The King will at some stage travel to the other countries of the UK, namely: Wales and Northern Ireland, in what is known as Operation Spring Tide. By the middle of the week, Her Majesty’s coffin is due to be flown to back to London, where she is expected to be at rest at Buckingham Palace. Then a period of the Queen lying in state is expected to begin in Westminster Hall, known as Operation Marquee, following a ceremonial procession through London.

The Archbishop of Canterbury will conduct a short service following the coffin’s arrival. The Lying in State normally lasts for four full days. It can be expected that hundreds of thousands of people will file past the coffin to pay their respects.

The actual state funeral is expected take place at Westminster Abbey, with initial plans for the coffin to proceed on a gun carriage to the Abbey, pulled by sailors, using ropes rather than horses, with senior members of the family likely to poignantly follow behind, just like they did for the funeral of Diana, Princess of Wales and the Duke of Edinburgh.

However, these plans can obviously be amended in the coming days. What is certain is that Heads of State, Prime Ministers and Presidents, European Royals, alongside key figures from public life, will be invited to gather in a congregation, that can hold upwards of 2,000 people.

The service will be televised, and a national two minutes’ silence is expected to be held.

Again, still to be officially confirmed, but it is expected that on the same day as the funeral, the Queen’s coffin will be taken to St George’s Chapel at Windsor Castle for a committal service, which also should receive televised coverage. Later in the evening, there will be a private interment service with senior members of the royal family.

The Queen’s final resting place will be the King George VI memorial chapel, an annex to the main chapel. This is where her mother and father were buried, alongside the ashes of her sister, Princess Margaret. Then Prince Philip’s coffin will be moved from the Royal Vault to the memorial chapel, to join the Queen.

Details will emerge over the next few days, but one thing is for sure, the proceedings will be carried out with military precision and be observed by those in attendance with the upmost respect, for a lady held in the highest esteem, and who in all honesty, is irreplaceable.